Go Outside and Play Update: Chicago in Concert, Mountain Winery

Notice, please: this is actually a blog, and as such, I blog what I feel like and simply don’t care about anyone’s expectations. So please stop emailing me with your “concerns.” The blog is about me, what I happen to love or hate. It has always been about me: since 2003.

Accordingly: Chicago. In concert. The Mountain Winery. Saratoga, CA. Last night. Aug 6, 2013. Saw the Gipsy Kings there a week ago. All the images can be clicked for the hi-res versions. 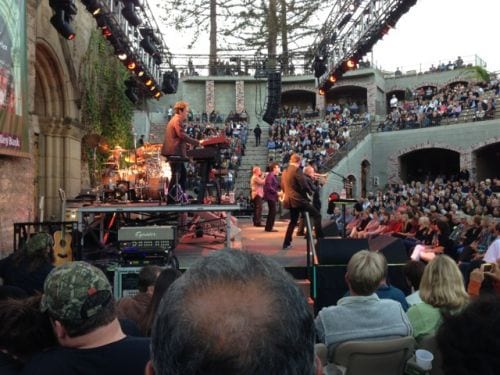 That was after the beginning. Just prior, I thought we were going to have two concerts, Chicago and the Police. 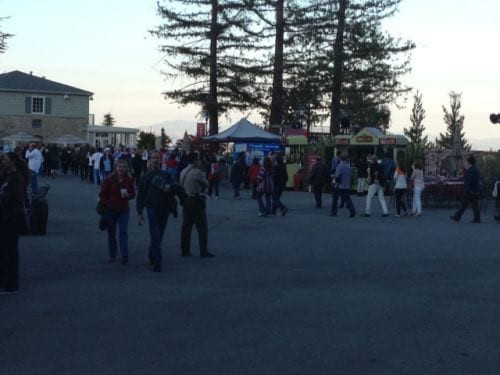 It’s really laughable. It’s such an upscale crowd, yet you have all these uniformed goons around. That one, I watched for a while as I was smoking an American Spirit in the condemned area, and he just could not stop preening himself and his military pressed uniform. Then they go around making sure all the bars are closed like an hour before the concert ends.

…On the other hand, you’ve probably got 80-90% commies as attendees and they are the easiest people in the world to fool with pretentious displays of “security.” I digress.

Chicago is an American rock band formed in 1967 in Chicago, Illinois. The self-described “rock and roll band with horns” began as a politically charged, sometimes experimental, rock band and later moved to a predominantly softer sound, generating several hit ballads. They had a steady stream of hits throughout the 1970s and 1980s. Second only to The Beach Boys in Billboard singles and albums chart success among American bands, Chicago is one of the longest-running and most successful rock groups in history.

According to Billboard, Chicago was the leading US singles charting group during the 1970s. They have sold over 38 million units in the US, with 22 gold, 18 platinum, and 8 multi-platinum albums. Over the course of their career they have had five number-one albums and 21 top-ten singles. 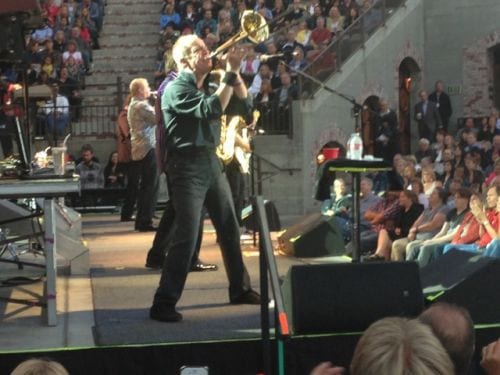 That founder-of-the-band little guy can’t possibly be taller than about 6/6, but that little 66-yr-old firecracker fucking rocked our world with his trombone. And who in the fuck bases a popular rock & contemporary band around a fucking trombone???!!!

In addition to playing the trombone, Pankow has composed many songs for Chicago, including the hits “Make Me Smile” and “Colour My World” (both from his suite Ballet for a Girl in Buchannon), “Just You ‘N’ Me,” “(I’ve Been) Searchin’ So Long,” “Old Days,” “Alive Again,” and (with Peter Cetera) “Feelin’ Stronger Every Day.”

“…When the actual Chicago Transit Authority threatened legal action.” Laf. Wanna guess who’s been far more popular with Chicagonians over the last about 46 years? What a buncha wankers. I digress.

…I’ve never been a particular fan of Chicago though, with the immense discography they’ve produced over nearly 5 decades, it’s probably difficult to find someone who doesn’t like any of their songs. I like quite a few but what gets me the most is the nostalgia of the whole thing. The other point is that live concerts are so very different from studio produced albums. I recall when Beatrice bought tickets to a Jason Mraz concert a few years back and I was like ‘WTF?!’ But I thoroughly enjoyed it. He rocked the house.

So did Chicago and they said at the ouset it would be a long performance and it was. They just rocked and rocked some more and then some more. Even did some more obscure, prog rock sounding stuff. Anyway, I loved, loved loved it: it’s easily one of the best concert performances I’ve ever seen.

I tossed together about a half dozen 1-minute video clips, should you wish to like that.

Now, stop obsessing about your diet, eat real food because you know what it is, and go outside and play.