How does one write a memorial for a small giant who never seemed to know it and certainly never showed it?

“Richard; when I go, I don’t want to be remembered. I want to fade away. I want it to be like I was never even here.” – Page Perrin

That’s what Page told me about 5 years ago when I asked him about his reluctance to be in all the videos now being done, including Hat Creek Rim. Page Perrin was the quintessential cool guy who had time to reflect upon his life. He unwittingly became a complete presence and mainstay of Hat Creek Rim where us geeks like to fly hang gliders. I like how my dad said it, who’s known him as long as I:

“He was the most gracious man I ever met.” 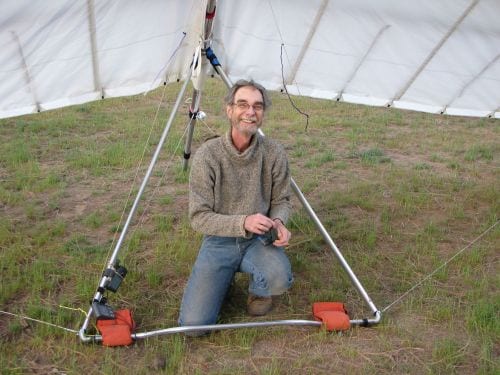 The short story is that he did his time with the various phone companies—a microwave technician—who spent a lot of time on the tops of mountains. He decided to spend the rest of his life flying off them dangling from a thread, from a wing. So he bought some property—5 minutes away from the LZ, 15 from launch—and there he stayed with his pack of rescue dogs and strays that only ever experienced the wild life of the rural dog, a life that knows nothing of cages and leashes.

What he didn’t decide was to be so completely loved by so many. …The hundreds of people who will miss him. They decided that. Sorry, Page: while I can grant your wish in the large, can’t do it in the short term. Most of us are too weak; and even those who profess otherwise will be present at your memorial flyin on the 17th.

My friend and flying buddy of 15 years died last Friday evening five days prior to my annual arrival in the first week of August. He was at one of his favorite places on earth at the time… the LZ, talking to other pilots on the radio who were up in the air. Suddenly, there was no response. By the time folks landed, he was gone. First responders arrived—they, all, had known him for years—but there was no point in getting him to the hospital at Fall River Mills. He was already dead. His friends stayed around, kept guard, and waited for the coroner to come collect—at 1 am—5 hours later. That’s how things roll in remote areas.

…I arrived Wednesday evening too late to fly. Just in time for dinner. I planned on flying Thursday but ended up cooking dinner for the family instead. No problem. I usually put in 3 flights so I still had Friday, Saturday and Sunday. So Friday afternoon I decided to drop by Page’s place to let him know I’d be up at launch. Upon arrival I was happy to see all the dogs who came out to greet me. But Page didn’t. Instead, his longtime friend and neighbor—and the one seeing to his final affairs—came out, and I got the news.

There’s a bit of a woo factor to the rest of the story. The previous evening, while my dinner was cooking, I grabbed the keys to my brother’s truck and went up to the LZ to take in the scene for an hour. There was nobody there, or up at launch…just me in my solitude. Curiously, there was Page’s blue folding chair under the tree, with an empty bottle of Sierra Nevada in the cup holder. I thought it odd, moved it over into the late sunshine and sat there for about 30 minutes just recounting all the good times with Page & everyone else, the dozens of flights—a few of which I got up to over 8,500 MSL (launch is at about 4,500 and the LZ, about 3,000). I did a panorama thingy. To the left is the rim we fly from and to the right, Page’s chair.

Click on the image to open the wide version

When I left, I went to move the chair back to under the tree. But instead, I left it where I’d placed it so that Page would know someone had been there and got use out of it, which everyone who knew him would know he’d find pleasing. He was always there to smile at you, help you in whatever way he could.

Hat Creek Rim stands on its own as all pilots who’ve flown there know. It will endure as it has for millennia. …Just with a bit less sheen for at least a while, in spite of Page’s wishes.

In the end, I finally had to get my ass up the hill and fly on the last evening, Sunday, as a sort of tribute and of knowing that Page would already be greatly displeased at my having passed up two days of beautiful flying weather in a place he never took for granted—even though he could fly any day he wanted. Here’s a 4.5-minute video mash I did of the thing, courtesy of Beatrice whose voice is there throughout (as well as the voice of my dad and a few others).

That flight and in particular, my high speed approach and landing, were for Page.

There’s a Facebook group set up for “Friends of Page and his dog Spot.” Spot was just one of Page’s several dogs, as I’ve already written, but they were ever present and Spot, a stray that showed up one day and refused to leave, has perhaps the most distinct personality as a working, herding dog. First, here’s Spot being “charmed” by my female Rat Terrier, “Nuke.” They had a good reunion over this last weekend, but the magic seems to have faded. I think they’ve both moved on with their lives.

To wrap it up, this video from 2008 features both Page (shy on video), and Spot at the end, “helping” me after landing. Incidentally, these herder dogs are amazing in the way they can run intercepts, even for landing aircraft.

What I love about this video, in particular, is that I had decided to show a bit of the perspective and process of launching, as most videos start from the point of launch. As luck would have it, there’s about a couple of minutes of the 4.5 min vid of Page & I just chatting about conditions and such. Back down in the LZ, I’m pretty sure that’s the one of my launches he ever criticized in dozens, calling it “The Funston 2-Step”—a reference to Fort Funston south of San Francisco, where we fly the very smooth onshore flow off the Pacific when it runs right into a cliff and goes straight up. In mountain flying, you should never take a smooth cycle for granted. Always launch at full power (strong run).

I’ll treasure that one forever as I’ll miss him forever. 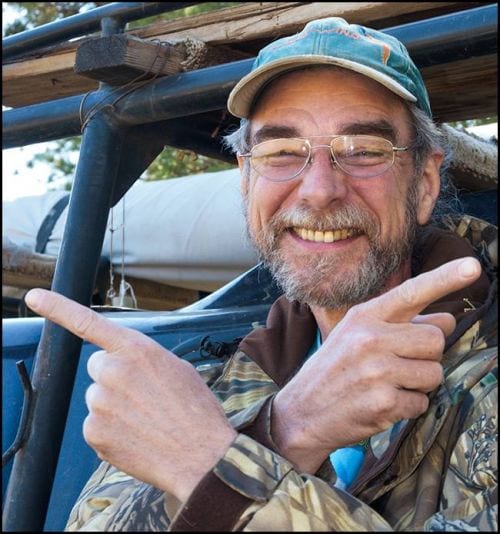 Which way did you go, Page? Either way, you’ll make either place a better place.

As an afterthought, it seems to fall to me to memorialize in a small measure and from my own perspective, the lives of very unusual, cool people who have influenced me. Here’s my other two, in the same vein.