Back in April or so of 2012, I thought I’d hold out the cold water therapy idea, because I’d been doing it myself for a long time at the gym in 45 degree a coupla times per week for 10-15 minutes.

Thing is, the cold water dip was always love/hate for me and I knew that for many people, it’s just hate. I wanted to help them warm up to the idea. Those are the people who always wade into cold water; whereas, I just always jump in, because I know that the hate turns into love—and if not while in the water, when you get out. And then, on levels. 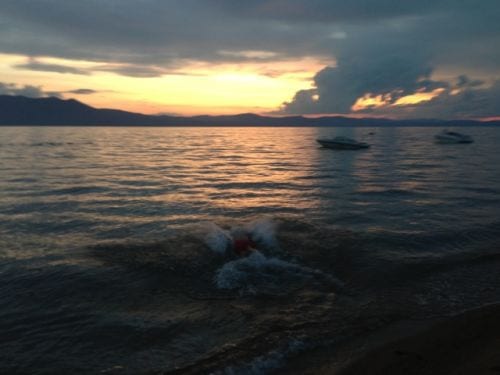 Some of you might remember this, where I decided to take it into the backyard. 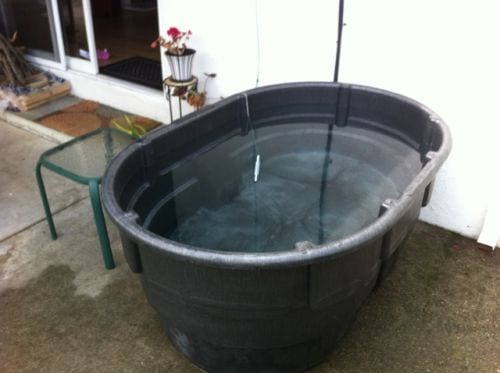 Big Tub – By Rubbermade, available at any farm/feed supply

More info and pics here: Cold Water Therapy and Experimentation Recommences. So that went on for a while, and I even did a video while in 57 degree water.

I also used to go to the pool a lot, and in some places like campgrounds and my sister-in-law’s pool, they’re unheated and so that’s always great for a 30 minute soak. But eventually, the whole thing just kind of went the way, like lots of stuff does for me. OK, cool, but sitting in a cold tub for 20-30 minutes per day, you may find, is rather like doing the treadmill thing. It’s uncomfortable, and excruciatingly boring.

Earlier this summer I was over at our local club quite a lot for pool time and time in the sun. It’s nice; but again, there are the downsides. Gotta get stuff together, get in the car, etc. Plus, the water is heated, so not particularly cold (about 85F). Even doing as I did—treading water in the deep end for 30 minutes—it just didn’t quite provide the invigorating boost I was seeking.

Then one hot day in my backyard, I filled the trough and got in. Still, even here in the summer, the water from the tap runs about 65F, so substantially less than the pool. The other thing is that once boredom sets in—which for me is about 2-3 minutes, I get out. Two or three hours later, I’m hot again, so repeat. So on.

So, in the last couple of weeks now, I’ve not taken a single shower in the house—and since I don’t use soap or shampoo and haven’t for 4 years, why not just begin my morning with a dip in the tub for a few minutes, then rinse off under the garden hose? That’s what I do—Beatrice always laughs and calls me crazy, and I tell her it’s everyone else who’s crazy—and most days, I’ll repeat once or twice. Moreover, a dip right before bedtime is really great for inducing a deep sleep. Here’s another thing, which is how you tell that each time you do this, it’s having a profound physiological effect: cold immersion diuresis aka wow I gotta pee NOW! For me, this always happens within 10 seconds.

Here’s another thing. Strangely enough, I find cold showers to be much more unpleasant, likely because of the spray part. Whereas, I relish just plopping down into full head submersion in my tub and then the garden hose shower/rinse after is very enjoyable as well; and it’s all over in just a few.

But here. Ameer Rosic has a method for you to get used to the cold showers if you’re not situated such that you can have a water trough in the backyard.

I’ve come full circle with the thing, but with significant modifications. I’m not really using it to “boost metabolism,” lose fat—plug into “ancient pathways”—or anything like that, but to get the high and feeling of well being I always get from it…simply by limiting it to just a couple minutes or so each time and making it easy and quick. And, there’s plenty of times where I just dunk and get right out immediately. You still achieve the same level of charge.