A Valuable Lesson in Just About Everything

I got an email from Nancy Redd this morning. She’s the nice and capable host at Huffington Post Live who did my interview on Friday about not using soap or shampoo for nearly 5 years, now.

She emailed to tell me that a clip and writeup had just hit the front page of AOL. Shortly after, I was contacted by CBS for one of their shows. I’ll withhold any more info until it becomes a reality, if it does. At this point, assistant producer looking for show material, so I haven’t made the cut, yet. Sure hoping to, though.

Richard Nikoley showers every day, but it’s been more than four years since his showers came with soap and shampoo.

HuffPost Live’s Nancy Redd hosted a discussion about personal hygiene, tackling long-debated questions like whether a washcloth or loofah is best or how important soap actually is. Nikoley, who blogs for FreeTheAnimal.com, said he’s doing just fine without most body-cleansing products.

“I have been over four years now, almost going on five, with not using any shampoo on my hair nor soap on my body, just water,” he said. “I may take several showers a day, but it’s only with water, and it has been the most liberating thing of my life. Travel is easy.”

Nikoley has continued using deodorant, which he said is important because of the “social aspect” that comes along with wearing it. But he still travels incredibly light when it comes to personal products.

“When I travel, it’s a toothbrush and my Old Spice,” he said. “In fact, I usually don’t even use toothpaste because just the dry brush actually cleans your teeth way better than using paste.”

That’s the mundane to you, because you know this story and I wouldn’t tax you again, except for the huge numbers of comments under the post. You really, really have to take a look, especially those who’ve known me for a long while, met me in person, etc.

This is a very rare opportunity to understand how seriously deluded people are in general on the slightest pretense. [Especially on the Internet?] I really can’t even begin with the 300+ comments at this point, 99% negative, many just “me too.” I did post one though, as serendipitously, it was right up at top when I scooted over first time. Ajtlawyer: 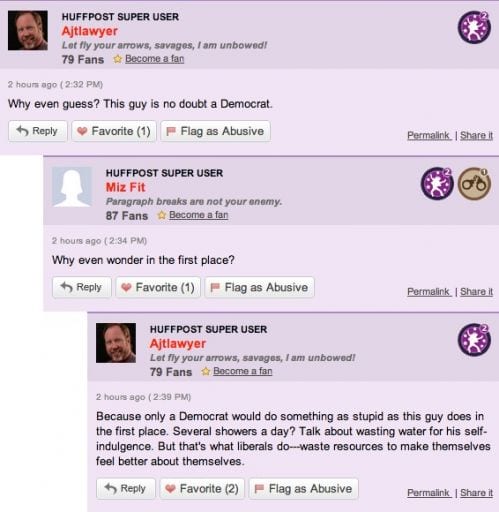 You’re welcome, Democrats, liberals, commies. Now you have proof of just how stupid Republicans can be. I replied.

I’m actually a-political in terms of practical politics. I think Republicans are frauds, but Democrats are liars, and I lean towards the former if I have to.

My favorite quote is HL Menken:

“The whole aim of practical politics is to keep the populace alarmed—and hence clamorous to be led to safety—by menacing it with an endless series of hobgoblins, all of them imaginary.”

And in the words of George Carlin, “if you vote, you have no right to complain.”

Alright. Between Marie, Tatertot, and now this, pretty interesting Tuesday. 1:36pm and I haven’t eaten yet. Better get to that. Hungry.

…Can you imagine the comments on a post like that referenced above, where I’m describing how I don’t actually eat any day until I’m actually HUNGRY?! …which typically happens 10a-1p, daily? Can you imagine? Think and chew for a minute. Now, imagine other scenarios and then imagine what’s behind all of it; because, as I told you: this is A Valuable Lesson in Just About Everything.

How many times…How. Many. Many. Times…have I told you that I live in a world of abject, hopeless morons? How many times? Are you believin’ me, yet?