The New Gluten Free Products. Are They Any Good? I Put Them to the Test.

I’m almost certain that a few years back I must have laughed and joked about the advent of gluten free products. F-bombs, probably. “”Still not paleo,” probably. It seemed to me to be mostly cupcakes and other sugary baked goods. At the same time, because I’m on lists, I’m getting about a new “paleo” cookbook every couple of weeks in the mail, hoping for a review (I review some, getting pickier and pickier). I always at least browse them. And I must say, the omega-6 PUFA load in the cups and cups of highly concentrated almond in the form of flour used in so many of the baked goods is WORSE than gluten and sugar combined. My view.

So, I was content, from time to time, to just grab a nice, real baguette or some water crackers for a cheese, wine & fruit indulgence with guests. But since I go to Whole Foods often enough, I kept seeing more and more gluten free products. They have a label on the shelf now, making them easy to spot. I began reading some ingredient labels. One day, I just grabbed a box of Glutino’s original crackers. For something that’s not going to be eaten every day (took two weeks for Bea & I on that one box of 32 crackers), I thought the ingredients pretty reasonable.

I always give good points for short lists. Thing is, it wouldn’t have made a difference if they tasted like crap. But they don’t at all. They’re really damn good qua cracker. Macro wise, just under a gram of fat and 3 grams of carbs per cracker.

Then I went without Beatrice on a short, 2-day hang-glide & camp trip, sleep in the car deal. Didn’t want to deal with cooking or restaurants, so brought a cooler with boiled eggs, fruit, cherry tomatoes, whole milk and…Bakery On Main’s gluten free Nutty Cranberry Maple Granola (which I ate as cereal & milk). Careful. That stuff is crack in a bag! But still, nothing like an average cereal box ingredient list.

Above all, none of these products made me feel bad, by which I mean: heartburn or coma. And so I thought, ‘might as well test pasta & bread,’ so I did.

I began with Ancient Harvest Quinoa Spaghetti (ingredients: non-gmo organic corn flour, organic quinoa flour, water) and I must say, I think I like it better than wheat pasta. First, there’s an interesting aromatic element that takes you slightly aback, but then became quickly enhancing for me. Second is that wheat never, ever on its best day had al dente down so good. I actually found it hard to ruin, cooking it substantially longer the second time, just to see. I have some Glutino rice-based pasta to try next. 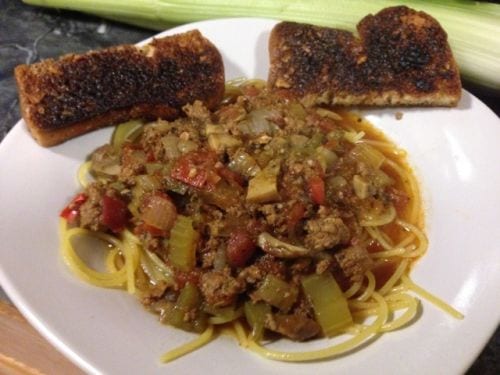 The garlic toasts are gluten free (and yes, I like them al burnte, and I go to great lengths watching the broiler until they’re just right). Here’s basically mom’s sauce, which is fabulous, and the celery is the star. The marjoram is dope, too, just not too much.

Half of people’s whole problem with pasta, any pasta, is that they eat such fucking enormous portions of it (and “all you can eat” Olive Garden). What you see above is the size I was served by my Sicilian friends in their restaurant down the street a few times a week when I lived in France, so that’s the portion size I never exceed.

On to bread and this is where I was blown away the most. I’d noticed gluten free breads in the Whole Foods freezer for years. Maybe it’s just me, but I really am not interested in $5-6 for a loaf of frozen bread. Then suddenly there’s a couple in the regular bread section and since Udi’s White Sandwich Bread was the least cost at $4.99, got that one. I’m gobsmacked, because it’s just like decent sliced bread. It makes me wonder if fresh baguettes are not too far behind. All it takes is enough of a market. Very, very impressed. Duplicates good sliced bread on every level.

Here, I get a bit carried away. Given your toasted bread and mayo as substrate, here’s what you can do with tuna salad, tomato, medium boiled egg, dill pickle and yellow onion. 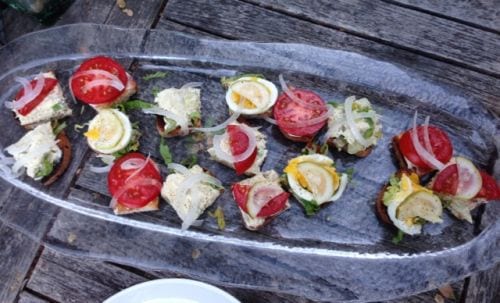 My German grandmother always used to make sandwich variety plates with what she had on hand, including liverwurst, and always on French bread. This platter was for Bea & I for Sunday Night Football, where the 49ers were embarassed two weeks in a row. Wish they could do as well as Beatrice in her fantasy football league. 14 teams comprised mostly of her sports junkie brothers, brothers-in-law and nephews, and she’s not only 3-0 and in 1st place, but the top scoring team. I knew she was getting into it yesterday when I got into her car and KNBR Sports Talk 680 is on the radio. 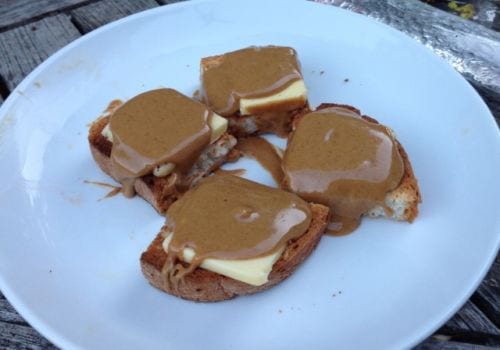 Bea had never had toast with butter and peanut butter. She basically thought it was crack on wheels.

Like I said, I got a bit carried away. Plus, I haven’t made tuna salad in many months, and so I did a 4-can batch. Accordingly, this was first meal of the day, last two days in a row. 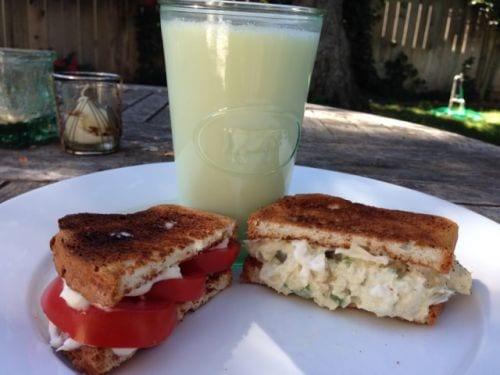 In all, results are fantastic. They just don’t make me feel like wheat products do at all. No heartburn, no coma. We still intend to keep it pretty reasonable, though, and plus the products are quite expensive relatively. In all, for two people, it’s 4 servings of spaghetti and 1 1/2 small loaves of bread in two weeks time. So, probably no need to call out the paleo Cavalry to haul us off. You can tell the folks on Exile Island to stand down.