The Relative Nutritional Bankruptcy of Good Fats
Francisco Bravin aka “Frank”: Hello, and Are You Out There? Your Five Grandchildren Want to Meet You

Starch…while in ketosis…on a ketogenic diet? It’s an oxymoronic contradiction in terms, right? After all, isn’t the LC catechism that even severely restricted amounts of starch or refined sugar can knock you out of ketosis? And now, with “nutritional ketosis,” the recognition that even protein can knock you out? After all again, “excessive” protein is the new carbohydrate in terms of staying in ketosis.

How about 30-40g of starch, plus a decently highish protein meal, and you STAY in ketosis, if that’s your goal? How about if the starch actually enhances the stability of your metabolic ketosis? I say ‘metabolic’ instead of ‘nutritional’, because replacing whole protein with isolated fats is not adding micronutrients. It’s actually taking them away in the hundreds of percent, replacing them with relatively empty calories that low carbers often see as virtuous because of desired metabolic effects, and not necessarily optimal cellular and hormonal feeding and function—save for the single of many hormones they seem to care about: INSULINZ!!!

That was commenter Marie’s quest. She has a family member with cancer and as a therapeutic measure—just as with neurological conditions—ketosis has both measured and theorized benefits. Also, for initial weight loss and “resetting metabolism” (enthusiast quotes, not scare quotes). I’m just not sure—and certainly not convinced—about using it as a whole lifestyle. That’s all.

Once I began putting together Tatertot and Marie’s N=2 collaboration (you know Tatertot Tim’s diligence with the science already; Marie is a PhD physical chemist who works at a well-known science institute) I noticed that I had saved Marie’s initial and more informal experiment she’d emailed about, and which served as the impetus for her collaboration with TT. I couldn’t let that go to waste or waist, so this is a 2-part series. Here we go. This is Marie.

Objective as I noted yesterday was to double-check for any effects while in ketosis and I needed an easy way for my dad to take the PS that wouldn’t disturb ketosis – PS itself shouldn’t have any BG effect, but what you mix it with could easily destroy ketosis (typical milk or kefir won’t do). 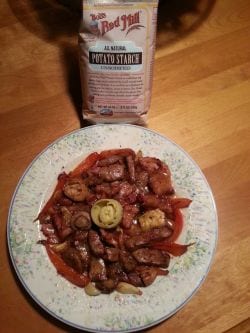 Heres how I verified ketosis is undisturbed.

Was fasted 48hrs tonight (happened to be fasting yesterday so this was good timing) and ketostix have been positive all day today (if you believe the scale on the bottle, I’m at around 40mg/dl – of course this is after fasting awhile, so likely not excreting as much acetoacetate).

I then measured BG = 79 mg/dl just before meal.

I went a long time with the measurements since both the fat load and the PS would slow digestion. No significant variations.

Richard, it’s the same 15′ recipe/process as before, but now using more fat, and half of it is Coconut oil (keto-enhancing) + 2 slices bacon. Because of the use of coconut oil, the calorie ratio of fat-to-carb/protein is allowed to fall to 2:1 for a typical ketogenic dish. Mine is 2.16, if excluding the PS from the carb count – this is justified as you’ll soon see.

The beauty of it: used the 4 Tablespoons Bob’s Red Mill

PS [30 grams of starch – Ed]—That Tim was confident wouldn’t disturb BG—to soak up all the oils and juices. Drained the juices at the end into a small cup, waited 5 minutes until no longer hot but still warm, then stirred-in 4 T. This ‘gravy’ is poured back over the dish.

Taste-wise: d’après moi [‘according to me’; literally, ‘in my opinion’ colloquially, and in context – Ed], the dish is better without ‘gravy’. Flavors are muted with the PS and it’s still a bit chalky (of course, since one can’t cook it), though I think some extra Balsamic or Worcestershire would improve texture (I only used a splash) and certainly using only three T Bob’s instead of 4 would help.

However, it still worked well and it’s an easy way to incorporate Resistant Starch into a very healthy but ketogenic diet for those who need that, like my dad. Apart from the unparalleled nutrition from the liver, there’s even inulin here from the roasted garlic, onions and artichoke.

See breakdown (note that fiber is included in Carb counts, the ratio would be slightly better if I subtracted fiber but carb numbers are very small anyway)

This first set of graphs show that 30 grams of potato starch carbohydrate in a single meal had no effect over 3 hours. She also did a control, mixing 30 grams of potato starch carbohydrate in water. Still no effect. So, did the starch mediate the glucose raising-protein, “”nutritional ketosis” fans? I don’t know; but neither do you, and I have suspicions. That’s because you make zero distinctions at times when making them is critical to understanding, as in: critical distinctions. “Starch is starch.” “It’s glucose.” And “all glucose raises insulin”…and is “converted to fat”…in one miraculous conflagration. And, and, then…”it gets stored”…and…”that’s why you get fat.”…It has nothing to do with eating too much fat that’s stored far more efficiently as fat, than glucose converted to fat, or food in general. Relax and pour on the added fat, so you can eat fewer carbohydrates [/sarcasm].

Read It and Weep, LC Ignorants

And here’s what happens, d’après Marrie (…’according to’, in the context), when you add 2T potato starch—just half the amount from the above results, into a regular cooked tater. 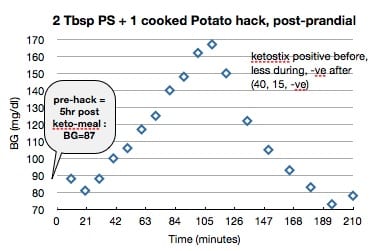 With Rapidly Digesting Starch (In a Ketogenic Enviro)

I dunno. Have you been hoodwinked into assuming that if your BG ever goes over 120, you’re fucked for life? It’s nonsense, a completely unobtainable goal that, so long as your expectations hold, will keep you dependent upon those leading you to believe the lie. It’s tantamount to Original Sin. It’s about acute vs. chronic and I never, ever, ever see that critical distinction being made. All over, I see: SPIKE!!!!!!!!!!!!!!!! It’s like going out for a hike, jog—even some sprints—and getting freaked out that your heart rate went over 120 BPM. If your heart rate almost never goes under 120, then you surely have a critically distinctive problem…and you’re probably fucked for life. Know your distinctions.

One of the things I think that Part 2 of this series will demonstrate is that ketosis is really a double edged sword, if that’s your thang. I’ve shown above—thanks to Marie—that resistant starch in the form of unmodified potato starch

won’t affect ketosis—and this makes sense, because you don’t digest it. Your colonic bacteria do. And they toss off saturated fat (SCFAs) in the trade. However, since you have trained your body to not be able to handle plain glucose or rapidly digesting starch while in ketosis, potato starch is probably not going to help you beyond feeding gut bacteria while in ketosis without cost, in terms of elevated blood sugar. It’s not nothing, just not the whole ball of wax carbohydrate adapted people get to enjoy. Your choice.

You’ll get to see what happens, however, if you are somewhat adapted to plain ‘ole carbohydrates. It’s a whole different story, and that’s the Canary in the Coal Mine, as far as I’m concerned. I’m going to suggest that it’s entirely possible that an LC, VLC, keto approach, while workable and obviously therapeutic in many instances may, in the end, prove to be a primitive approach that denies a lot of pleasures you could be enjoying, even as a diabetic.