I completely fell head over heals for the “paleo Pizza” craze years back. First, it was cauliflower crust and then, meat as “crust” or, “meatza.” Thing is, I haven’t made either in years. Why? Pain in the ass for the former and for the latter, just make a meatloaf.

So I ask you: what’s better, an indulgence you call “paleo” every week because you still have “pizza night;” or, getting over pizza night altogether and every now and then, taking in an indulgence in the real thing? Your choice, but for the mature Paleos who’ve gone through all the ups & downs and the newest things, how about just make a real pizza and enjoy it?

It. Will. Not. Kill. You. Promise. It’s about acute vs. chronic, and if you haven’t learned to largely control your taste for indulgences yet, then you might consider just giving up and go count calories. That works too.

I pulled my pizza stone out of the cupboard for the first time in over 5 years. Mission: La Reine. That was my favorite, and the little Sicilian restaurant a short walk away from my apartment on the Mediterranean in Toulon, France, back in the early 90’s did them in the wood fired oven.

First, let your dough sit out for a while, get up to room temp. I used Trader Joes’ Mark 1, Mod A pizza dough. Then, get your oven up to 450F with your stone on the first level above middle. 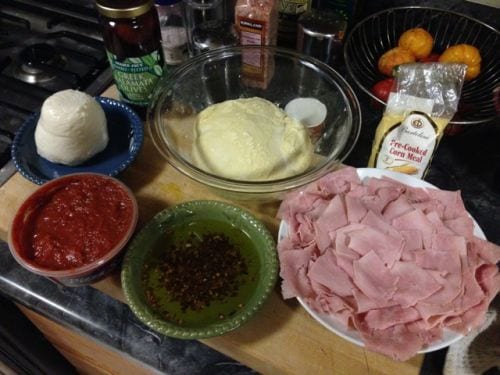 Pizza dough, owing to the high gluten content, is sticky as hell and sticks to itself even more vociferously. It’s like raw rubber, or something. I wanted to avoid using tons of flour to overcome this, plus I don’t have flour. So, I use corn meal for the nonstick element on the stone. I’m no pro, so attempting to toss the dough and stretch it out was no-go. So, I salted the hot stone with cornmeal, plopped the dough down and began trying to press it out best I could, slowly pulling my fingers off the stick, because you don’t want to break the dough apart at all.

It was hell and I’m thinking, “this is not going to work. There goes Sunday Night Football.” And then, I have a fucking brilliant idea. It’s been sitting on a 450F stone for 3 minutes now. What happens if I just flip it over? Sure enough. Light crust on the other side, completely non-sticky and I easily spread out the dough to cover the stone.

Then, I added stuff. (All the pics can be clicked for hi-res versions.) 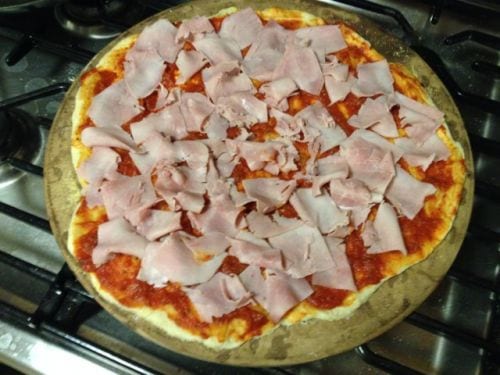 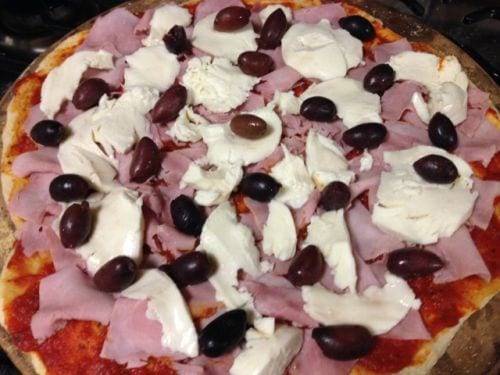 Now, here’s where I go all Sicilian on your asses. What the fuck are those packages of red pepper flakes, or the sprinkle bottles? Do you like them, sprinkled on your pizza? Well, good. Then you’re enlightened, but still ignorant; because the true way to impart that lovely red pepper spice is via 100% suitably spiced extra virgin olive oil drizzled on your pizza, and especially the crust, transforming it into the food of Ancient Roman Gods. Basically, Italians take those small fire-hot red peppers, score them with a knife, and insert and pack them into a bottle of EVOO with a spout. Takes at least a week to get up to snuff. Every authentic pizza making Italian restaurant has them. You can take it to your table and call it your own for the evening. 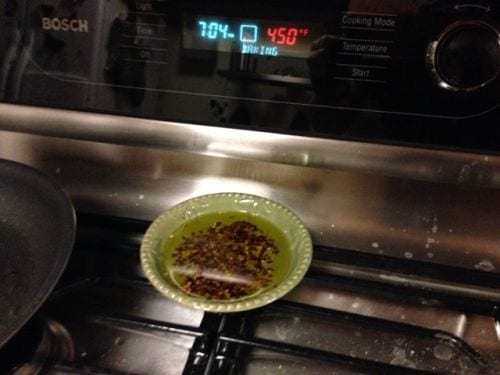 I was astounded at how well it worked. First, I didn’t have a bottle of pepper oil as previously described, and even if I did (I used to), it would be over 5 years old. The positioning is important. It’s sitting under the heat vent for the oven and in the end, was gloriously spicy hot and very warm as a bonus. 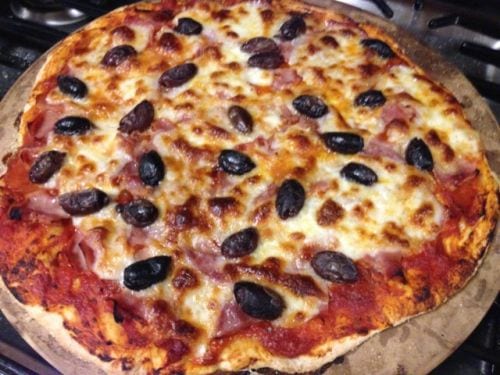 Beatrice is a “combination” pizza person and I have always scoffed at the idea. I like a pizza that showcases an ingredient or two so you can know if an ingredient or two is very good (and BTW, that was stellar smoked ham). How easy is it to hide crap with 6-8 ingredients? But, I have had a few slices of combo in my life that were very good. Bonus for black olives and crunchy green bell pepper.

As we’re watching Sunday Night Football (she’s now 6-0, still #1, and still top cummulative scorer by more than 200 points in her fantasy league against all of her sports junkie brothers, brothers in law, and nephews :). She wasn’t sure about the pepper oil, so she did one piece with, one without and soon discovered the error of half her ways.

She kept repeating: “this is the best pizza I have ever had in my life.” At least 6 times. I’ll take it.