Perhaps This Informs About My Passion
Russell Brand and Jeremy Paxman: Oh Myyy!

Isn’t there a “Go Outside and Play” meme that goes around?

Background: We moved into a place about three years ago, around this time of year (early September). The backyard was a principal thing for me, other than all wood floors inside…because wall-to-wall carpeting is the stupidest fucking thing ever created by man and demonstrates the power of marketing—combined with the idiocy of man—in covering up hardwood floors coast to cost in the 60s and 70s for “plush carpeting.” For those around or not, this culminated in gag-worthy “shag carpet.” Not to mention other “decorous delights…”

…Harvest Gold and Avocado, combined with dark cabinetry and flowery wallpaper, anyone?

But I do love it, albeit awkwardly. In retrospect, it serves as a metaphor for just how devoid of sense, perspective and lacking in any awareness of swaths of Renaissance style and artistic Merveilleuse the human animal can achieve, yet debase itself for the sake of cheap and obtainable, and “ou courant.” It’s grounding, in a perverse sense.

I digress, but I feel better….

…I came up with the plan Sunday afternoon over football and booze. In spite of having the trees trimmed almost 2 years ago—ending up with 18, 6′ diameter piles stacked 3′ high to haul away—I’ve come to realize there’s another problem. Trees planted when planted, are now big, and crowding one-another. I singled out SIX of them for culling, from 6-10″ diameter at the trunk, roughly. Basically, they were all getting in each others’ way as they grew. As the sometimes proper steward of the idiot, ignorant, and encephalitic, I did my job.

But, in my inebriated state, I crafted another plan as well. I’ll do it all “Neo-Paleo.” That is, t-shirt, shorts, barefoot throughout, and no protective gear. And, I’ll use a neolithic chainsaw instead of a neolithic machete (hey, what’s a few thousand years of industrial development amongst friends?). The other Neo-Paleo aspect—and this was all worked out while booze, football and Italian thingies they call antipasto (marinated peppers, shrooms, olives, roasted garlic) were competing for my attention—is that I knew I’d get scraped and cut up. ANTIBIOTICS!!!…if it should come to that.  …And, and…if I end up in the ER, call Wooo! Who knows? Amongst other things, I might need a catheter. :)

Come Monday morning, with only a bare recollection of my macho proclamations, manly chest-beating assertions and drunken oaths the night before, I waited for the morning fog to clear and decided I’d go for it anyway. I cut down the first tree of six, and being completely sober, of course, decided to cut and clear one tree at a time.

But work can be play and you might as well mix them up if you can. So, after clearing out the first tree that took like 5 minutes to cut down and another 45 minutes to clear, I decided to just have fun and just cut down all the other trees. “Hair of the Dog,” I said to myself. Then I’d clear and cut wood to dry for the fire pit. 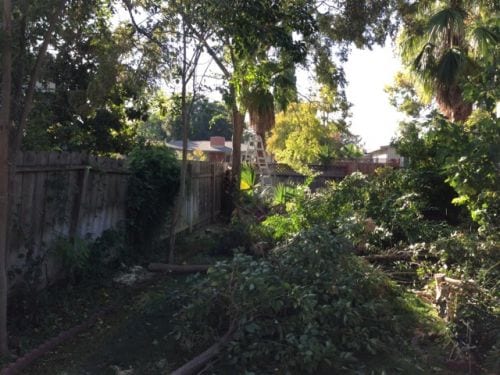 No Room at the Inn

By this time I’d already sustained a number of cuts & bruises on my arms & legs, but just couldn’t sit still. I’d go to take a break, sit down, and in 30 seconds I was up again. I put it out on Twitter, once I was able to sit still for more than a few minutes.

@rnikoley your testosterone levels are probably soaring. Fact –> http://bit.ly/17FhL9f (they did a study on it)

No shit. They did a study:

Testosterone plays an important role in mediating male reproductive trade-offs in many vertebrate species, augmenting muscle and influencing behavior necessary for male–male competition and mating-effort. Among humans, testosterone may also play a key role in facilitating male provisioning of offspring as muscular and neuromuscular performance is deeply influenced by acute changes in testosterone. This study examines acute changes in salivary testosterone among 63 Tsimane men ranging in age from 16 to 80 (mean 38.2) years during one-hour bouts of tree-chopping while clearing horticultural plots. The Tsimane forager-horticulturalists living in the Bolivian Amazon experience high energy expenditure associated with food production, have high levels of parasites and pathogens, and display significantly lower baseline salivary testosterone than age-matched US males. Mixed-effects models controlling for BMI and time of specimen collection reveal increased salivary testosterone (p<0.001) equivalent to a 48.6% rise, after one hour of tree chopping. Age had no effect on baseline (p=0.656) or change in testosterone (p=0.530); self-reported illness did not modify testosterone change (p=0.488). A comparison of these results to the relative change in testosterone during a competitive soccer tournament in the same population reveals larger relative changes in testosterone following resource production (tree chopping), compared to competition (soccer). These findings highlight the importance of moving beyond a unidimensional focus on changes in testosterone and male–male aggression to investigate the importance of testosterone–behavior interactions across additional male fitness-related activities. Acutely increased testosterone during muscularly intensive horticultural food production may facilitate male productivity and provisioning. [Emfeces meng]

So cut & bruised from head to toe, all whilst the setting sun was more prominent in the backyard than I’d ever seen it, I decided to wrap and begin the next day doing the more mundane clearing and cutting for firewood.

Immediately the next day, bright eyed and hard cock, I got an idea to trim some larger branches off standing trees. Here’s the thing. I failed to account for the difference of working overhead as opposed to near ground level. 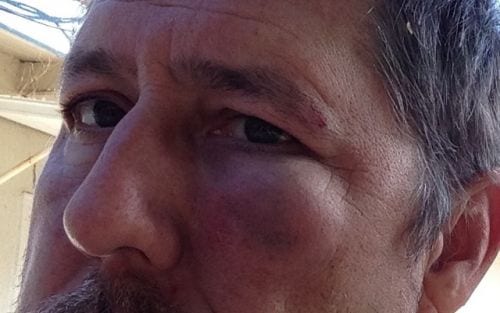 Yep, I took one in the face. That 4″ branch came off a bit before I expected. My shiner, 2 days later, is a work of biological art! Jesus, I was cross eyed for about an hour, and as the swelling went down, it turned into jaw & head ache.

On the other hand, I immediately rationalized: imagine if that had been my foot!

…Bea was like…”ice it, here’s this OTC and that.” I took nothing. Just asked her to cook dinner for me. I ate like a ravaged pig. Oh, yea, I did the entire day fasted as well. I was into 24 hours by about 3pm.

In the end I reflected that there’s never been close to a dead lift session I enjoyed so much, or got as much out of primally.

Here’s the debris for you paper users. You’re welcome. 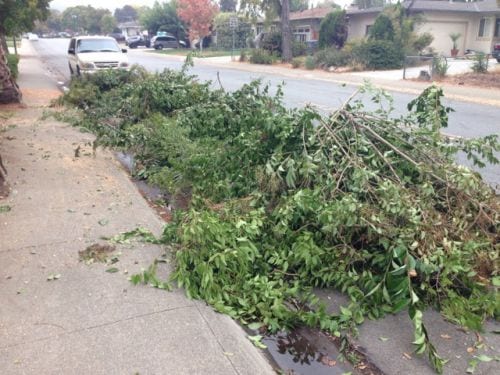 And here’s what’s for me, over the months to come in my backyard fire pit. Oxydationz!!! 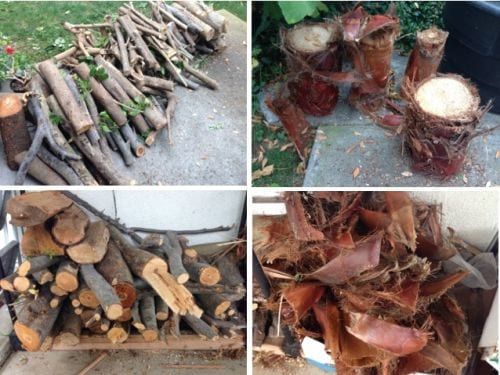 It’s so weird. I’m bruised, banged up, scraped and have two deep gashes that’ll take a while. I have a black eye and former headache. I have not used one single thing. In fact, I have not even cleaned or dressed a single wound.

It’s been a while since I felt so alive, so vibrant, so in tune with much of what life perhaps ought to be about: FEELING it.