OK, that’s exactly right. I’ve been working on a post about my take on some of the more funny dissenting comments from my 3 political-religious-government-shutdown-axis posts yesterday, but just couldn’t put it together in a way that made me happy:

…As I was saying…. Anyway, I loved yesterday and fooling around without a care, especially this morning when a reader emailed a Tim Ferriss interview: The Plus Side of Pissing People Off. But, I have this quirk about reading an article or a book or anything in which title, facade, or promotion suggest I’m going to agree, i.e., this will be a trip into “Richard is so fucking smart” territory.

I always look for at least one rebuke, as penance. Here was the best:

Understand the difference. As Mr. Powell has put it, “Being responsible sometimes means pissing people off.

Ha! Ok, I’ve got it now. Solid. ‘Quit trying to piss people off for fun, and the fun will come.’ But most importantly, you’ll still piss people off if you take honesty as a non-contradictory value; so it’s a function of perspective: goal, or cake icing? I have to take my rebuke and recognize it’s solidly the latter.

So anyway, here’s the food I made when I got hungry after a couple of hours trying to make a blog post make sense; and I didn’t get there before the title sandwich overcame my imagination and in the end, made me blog about it, instead. 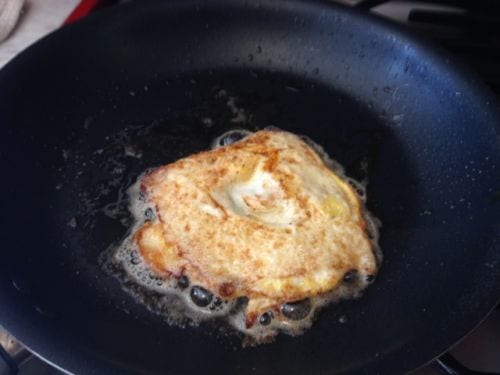 If you know you’re doing a fried egg sandwich, make it look like a slice of bread.

So the only thing unusual about the post is that’s it’s definitely NOT a take on a standard mayo and ketchup (or catsup) fried egg sandwich. We’re going completely out of the box here.

With that out of the way, I envision un sandwich jambon beurre et cornichon. A fave when I lived there. Fresh baguettes, sliced jambon, pickled cornichons and burre (French beurre, i.e., unsalted, but then, I repeat myself…except for les bretons, whom even the French don’t understand….) in the fridge most times for the at will, thing. It was often.

Haven’t had either a fried egg sandwich or sandwich jambon beurre/cornichon in a while. And yet, I had some ingredients. 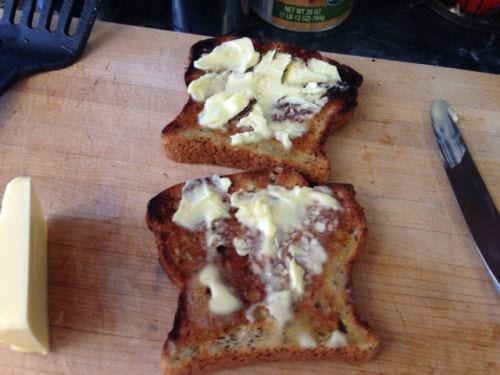 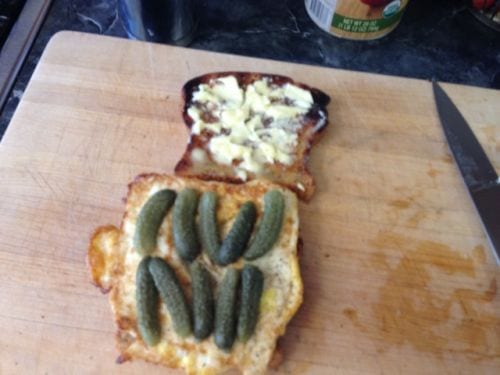 Yep, the fried egg formation resembles the slice of bread. There’s the cornichon pickles. You might call them “gherkins” but then, you would be WRONG!

Oh, it was absolutely fabulous. I think I loved the butter vs. mayonnaise, the best. Mayo’s purpose is to serve as a fat barrier for moisture, with a nice tart, creamy taste in return. But this total bastard stepchild variation isn’t about that, but about how melted butter turns the dark toasted bread into what it became for me.

And then you get the offset of the protein and fatty egg, and the acidic pickles. 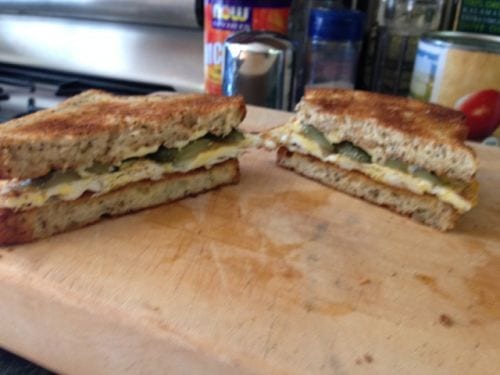 I really did love it. I do lots and lots of stuff I don’t like or love quite enough to post about, but this plucked a bit of a heart cord in that it’s totally fucking off the wall, but quite totally fucking good, and I loved it.

I couldn’t not show it to you.