That’s absolutely right. Yep, I’d celebrate and laf at hearing he was anally gang raped until dead, just so everyone would have a new place to take a piss.

How about that? Revolting? Yea? Brutal? Yea? Well then check this out:

A Chicago woman, Cassandra Feuerstein, 47, is suing the town of Skokie, Illinois, claiming she was a victim of police brutality, reports CBS Chicago.

The above CCTV video shows Feuerstein just after being arrested for DUI in March 2013. After asking an officer if she can call her husband, she is removed from the cell for a few seconds. Then, at the 1:50 mark in the video, Feuerstein — who weighs 110 pounds — is shown being flung, face-first, into a concrete bench in the cell.

There’s a bunch more image captures in sequence at that link, but here’s the most pertinent ones. 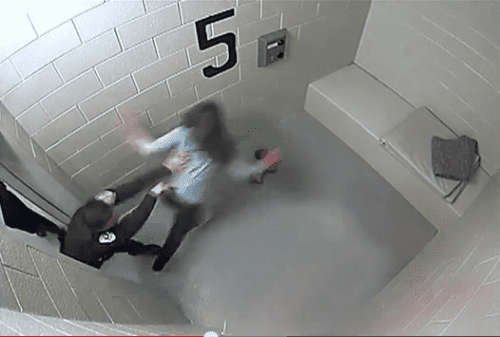 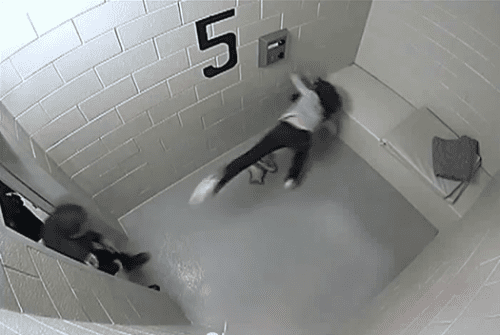 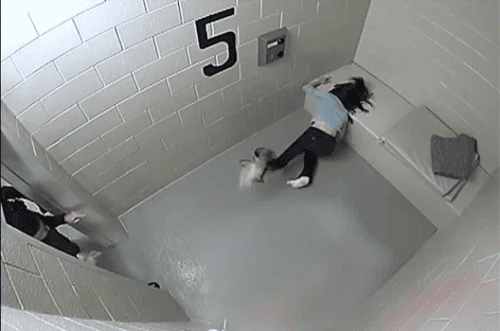 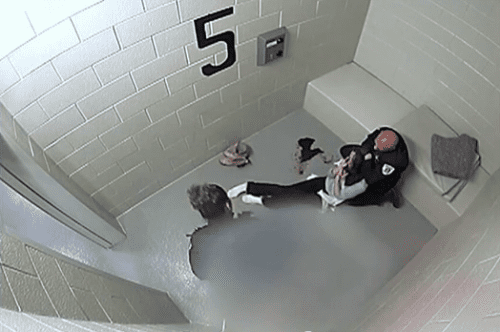 Immediately upon seeing the damage he’d done here, Michael Hart “did the right thing.” He immediately filed a complaint against his perp for “resisting.” It’s heroic, because that will probably save the City of Skokie a Million Easy, since that would have to be litigated and so on and so forth and attorney fees and months of delay, etc. I can’t tell from the video, but her hand might have brushed the door frame as she was being “ushered” back in. TO PROTECT & SERVE. ATTABOY.

You know what I’m sick to death of as concerns The Pigs?

What happened to the age-old, wise metaphor that one bad apple spoils the whole bunch? I keep hearing every time I raise this issue that “yea, but there’s a lot of ‘good cops,'” which I consider a blatant contradiction in terms on many levels. In a basket with literally hundreds of thousands of YouTube videos documenting police brutality (I’ve seen those search results as high as 2.5 million) and a legitimate, credible news report somewhere nearly every day documenting same, at what point do you consider the whole fucking basket just plain putrid and rotten?

What, are you starving for Pigs, or something? How fucking stupid are you willing to allow yourselves to be over this fantasy that they help you rather than routinely harm you? How many people can actually say that a cop really made a material difference in preventing them important harm? Compare that minuscule number (and I’ve never known a single such person ever in my nearly 53 years) to the massive numbers of people who’ve been harassed, robbed at gunpoint (that’s exactly what it is) and even been beaten or jailed when they were either harming nobody at all, or only themselves. Personally, I’ve been harassed needlessly dozens of times in my life and have been robbed hundreds of dollars; and never once was I harming a soul, or showing any clear objective signs of doing so.

So-called good cops are all long gone. Probably, thank the public unions for that because, as soon as there’s a mere suggestion of wrongdoing all wagons get circled every time by all. “Good cops” would rather stick needles in their eyes than rat out one of the hundreds of thousands of predatory criminals in uniform, toting guns, stealing from and brutalizing people to get their rocks off in America.

Where are the so-called good cops, outraged when a fellow cop literally gets caught on tape beating someone nearly to death—or actually to death—and they get a paid vacation “pending an investigation?” Where’s the “good cop” outrage when, fearing a big hit on municipal or state coffers, it’s decided by the DA or AG that “there was no evidence of wrongdoing,” in order to give the government a leg up in settlement negotiations—all when your so-called good cops—who know very damn well and good what went down—won’t do a fucking real thing about it?

They can all rot in hell, every last fucking one of them. Let Satan sort ’em out.

2. These Predators Don’t Serve, Or Protect; Nor Do They Even Pretend To

Get over lying marketing schtick and hyperbole, Pig loving-fucktards. Take your “Thin Blue Line” and snort it.

This is a so-called profession with an employees’ union, all with budget breaking, unsustainable pension obligations breaking the back of municipalities right & left all over the country. It’s so fucking lucrative that virtually everyone is on the take, now, and nobody wants to rock the [rotten] apple cart.

When is the last time in your direct experience a cop showed up when seconds counted and actually prevented imminent bodily or property harm, maybe even took a “professional,” oath-honoring personal risk in protecting citizens and their property? Or, do they typically show up minutes later to “serve” by making sure the mess gets cleaned up, dead bodies get carted off to the morgue…and oh…evidence is preserved and reports are filed in triplicate—but not for your satisfaction or your justice, but so that district and state attorneys can win one for “The People,” thus preserving your abject stupidity in this complete con?

Ever felt outrage at suffering an injustice personally or as a loved one of someone who has, only to read that the criminal plaintiff is “The People?” What about you and yours?

And how about the most public, massive brutalities? How often have you seen this scene: building with a shooter or shooters inside, pop-pop-pop killing people, all while cops in their armor and fashions are hiding behind trees or other durable obstructions? Then, to add insult, in the public relations gig to follow that they call a “press conference,” the official—typically dressed impeccably, in military press & crease, and with political aspirations—tells you that their primary concern was for “officer safety.”

Translation: We’re here to clean up the mess and conduct a thorough investigation once the coast is clear for us to “serve.” Looks like we arrived a little early, but fortunately, we have our armoured personnel carrier, all the officers are dressed to the nines in their G.I. Joe gear—courtesy of Vicarious Fashions (formerly Hasbro)—and we’ve taken up secure positions.

Like I said, they don’t even pretend to “protect.” Translation: They are frauds, through and through.

3. Unless Being a Professional Predator and Highway Robber is an Exalted Occupation, “Killed in the Line of Duty” is Rather Oxymoronic

Where are a huge percentage of these reports of shocking abuse coming from, made even more shocking by the fact these guys often know they’re under surveillance (…just imagine…)? They’re coming from local news affiliates.

So how come you’re not dry firing at the TV, or barfing on your own floor over the far less frequent reports from the same outlets that “another officer was killed in the line of duty last night?”

What a useless fucking bromide, a cheap slogan at its worst.

There’s two parts to this. The first is that according to reports I read (unverified), “The Perp,” Cassandra Feuerstein, had actually either pulled over or was just parked, realizing a predicament. That is, if accurate, she was being a responsible fellow human being exercising presence of mind, even in a compromised state. Along comes “The Hero” in “Serve & Protect” mode to cite her for illegal parking and then, driving while intoxicated when she wasn’t driving at all.

The “perp” is actually the victim of the “hero.” We live in an upside-down, 180 Degree world, where crime is regarded as virtue, and salutary honor is reserved for thieves and brutes.

The other part is that the vast majority of people in prison in America today are there, not for harming another soul, but for violating a law. You may think that’s justification enough but I tell you: a law that does not have as its basis to exist the presumption that someone else suffered harm, is arbitrary.

Who but your typical Republican retard, Sean Hannity sycophant, can even say “Land of the Free” or “America the Beautiful” with a straight face, anymore? I, as did many of you I’m sure, grew up with stories of the brutality, injustice and arbitrariness of the Soviet and Chinese Communist regimes. And we righteously considered ourselves better than that.

In the words of Dr. Phil: “How’s that working out for you?” Now?

Makes me gag, now. And guess what? In very nearly every circumstance, who was the very first government official all of these prisoners with lives and families completely shattered dealt with? They dealt with professional thugs for hire, complete with a public union and a lavish pension, paid for by you stupid, ignorant, flag-waving fucks who can’t think for yourselves to beat your stupid mess of a so-called independent & free life out of the wettest paper sac the world has ever known.

I see vicious, evil brutes here. And just like I was taught for good reason to celebrate the death by any circumstance of an evil brute, I simply can not in honest conscience make meaningless distinctions over the style of fashions or the identity of a paycheck signatory.

Over the top? No, and I’ll tell you why. Ever heard the joke: What do you call 1,000 lawyers at the bottom of the sea? A good start. Har har har. See, that’s socially acceptable because the public have come to realize that even in the private sphere, lawyers use laws to not only predate and parasitize for themselves, but for their White Collar Hoax clients. People understand that in spite of what good they may do sometimes, they’re pretty much a net drain on society and the economy. Who can’t easily work out that civil litigation in America is a magnitudes net drain on society and a Sport of Kings that you ultimately pay for?

Translation: hits your pocket book, death to them all.

But I’m over the top when I celebrate actually, the death or killing of any cop on any pretense. I do. I’m not bullshitting you. They are predators, killers, robbers and enslavers to an over-the-top measure. You should love it when a predator, killer, robber and enslaver bites it, no matter your allegiance or theirs. …If, you’re honest and your heart is beating correctly.

Be honest with yourself. Given the increasingly public, verifiable facts of widespread predation, cover-up, perjury, back-room-dealing, self-preservation at all costs, and on and on, aren’t you being kind of stupid to defend them or their institution ever, on any grounds? You don’t have to celebrate their killings as I righteously do, but don’t you think it’s a bit absurd to keep repeating “good cop” mantras, exposing the fact that you lack a functioning brain?

…And while I’m at it, how many of those fucking fraudulent, glorifying cop shows on the TEEVEE do you watch? Seeing a connection to that and your thinking or knee-jerk reaction?