I’ve done a number of sous vide posts, so just hit the tag to see some of them; or, use the search. Quick review: sous vide is a method of cooking whereby, you control temperature precisely—such that you never overcook. In fact, it is impossible unless you get the ideal temperature setting wrong. You can leave something for hours after it’s ready, and it will never get over that set temperature externally or internally. The advantage is, you can do very interesting things in terms of changing the properties of proteins in particular. You can transform them to a mouth feel you have never experienced before.

Contrast that with various other cooking techniques where, in order to get the inside cooked, you have to overcook the outside to varying degrees. On the other hand, sous vide will often leave the exterior of something less cooked or finished than you may want to serve, depending upon what you’re cooking. Tradeoffs. But, as you’ll see, there’s an app for that.

I’ve used Drs. Mike and Mary Dan Eades’ Sous Vide Supreme (SVS) for years since getting to attend their kickoff in San Francisco with Chef Heston Blumenthal and sharing sous vide tapas with Mike and Tim Ferriss. That was pretty cool. I now have personal tips from both Chef Heston Blumenthal and Chef Michael Mina (a different deal in SF) on how to do proper red wine reduction sauces.

What my experience has taught me is that sous vide really excels for the less expensive stuff. Yes, I still pretty much prefer ribeyes done on the grill. On the other hand, sous vide is amazing for filets, if you like them rare to medium rare. But pork chops? The SVS is veritably designed to make the absolute best pork chop in the world. Check this out: James Briscione’s Jack Daniels Pork Chops Sous Vide. Wish I’d taken a picture of the pink. I believe every single person à table told me it was the best pork chop they had ever had.

OK, this time it was bone-in chicken quarters and mushroom risotto. You can look up plenty of recipes for risotto and how to do it traditionally. I don’t really like to do specific detailed recipes because I want you to feel a little lost and unsure, so you get it yourself. Here’s all the fixin’s. 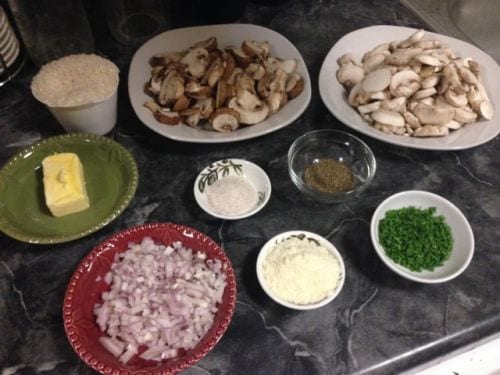 Basically, you warm your chicken stock on the side, sauté your sliced shrooms in butter for like only 3 minutes, until they’re soft and the liquid has dumped out. Don’t keep cooking to reduce the liquid. Set them and the liquid aside. More butter, sauté the shallots, then add the rice and coat and toast for a minute or two.

Then a solid 15-20 minutes of work begins. Just a single ladle of warm chicken stock at a time, on medium to medium high heat, stirring continuously. Once all the stock is absorbed and it’s getting “starchy,” add another (you are also reducing liquid as you go). I did 1 cup rice to 1 quart chicken stock, so 8 1/2 C ladles. Never. Stop. Stirring. Do not add salt. You are concentrating as you are reducing. Use unsalted stock if you can. Season at the end.

Once the last of the stock has been absorbed with most the the water boiling off (the rest absorbed by the rice, plus the concentrated flavor, you turn off the heat, introduce the shroms with the shroom liquid, and add the parmesan which imparts the creamy texture, along with some fresh chives.

Risotto is NOT paste. It is al dente, but only just barely. This is the point you season. 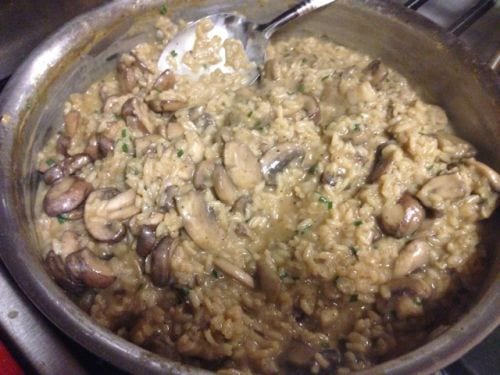 Beatrice loves all the shrooms. I love the taste, not so much the overburden of shroom texture, so next time, I’m going to make a mushroom stock and reduce it, then add only bits and pieces of lightly sautéed shrooms.

As to the chicken, I basically just melted some butter and tossed in lots of fresh garlic, lots of parsley, some soy sauce and some lemon juice. While that “fermented,” I brined the chicken for about an hour in salt water (5T salt per quart). I then rinsed and dried the chicken, brushed on the marinade marriage, vacuum sealed them and put them in the “water oven” for 2 hours at 165F, which is minimum for bone-in chicken (I was up against the clock and a hungry wife). Better to go like 4 hours as it will transform the texture of the meat even more.

Once it comes out, there are several ways to crisp the skin (told you there’s an app). You can: 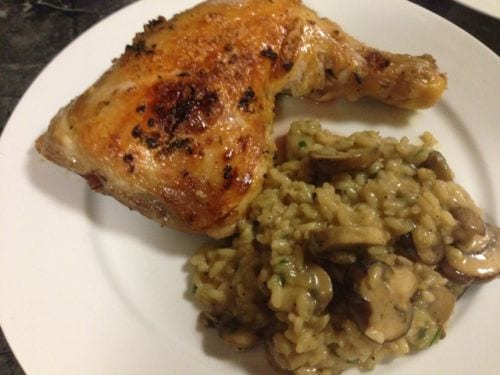 I can’t emphasize enough how different it is—when you see that chicken, taste it, and register the texture. Damn, I wish I’d done a pic but typically, once I cut in and begin eating, camera time is over.