Ok, Give Thanks. But Thank Yourself First.
New Free the Animal, Resistant Starch-Based Dietary Guidelines

To catch up, perhaps a dozen or more posts, thousands of comments from hundreds of people around the world self experimenting. No, you do not have to “wait for the ‘science,'” because self experimentation is science. And it’s arguably the best because since it’s self, that means it applies to you and only you. You get to do this and see for yourself.

OK, today, a rather sizable and meaty post . It’s a guest post by “Tatertot Tim”; and as everyone knows, the prime mover in the whole resistant starch awareness finally making its way into Paleo, Primal, Perfect Health Diet, and low carb circles. This is what we have all been waiting for. How does the gut flora of a habitual resistant starch consumer compare to that of a SAD eater, or, even an LC eater?

To review the problem for low carbers: Sorry low carbers, your microbiome is just not that into you, by Jeff Leach, prime mover at The American Gut Project.

Hey, Richard – I think I can provide some good closure on our grand RS experiment. Thanks for giving me so much wiggle room and taking the chance that this might blow up in YOUR face. My liability was extremely limited, but if people would have started dropping like flies after eating potato starch, you’d have been in deep doo-doo.

I think what we did was nothing short of miraculous. People embraced the idea and gave it a shot. What we saw was impressive improvements in insulin sensitivity, body temperature, skin conditions, bowel movements, sleep, and mood. To me, the best thing to come out of this was the use of potato starch and plantains (dried or flour). We researched the hell out of RS rich foods, and I still think we need to be eating them, too, but the purer forms of RS are what was missing.

“I’d tend to respect Michael Eades over a potato farmer hiding behind the handle ‘tatertot.’ Guess I’m wacky that way.”

Wow! A lot of water under the bridge since then, huh? We even, almost, got Dr. Eades to say he likes RS in a roundabout way! Norm Robillard, though not in love, gave RS a good, hard look. I noticed that Anastasia never finished her two-part series on the stupidity of RS, either. I figure I must have put thousands of comments on dozens of blogs and forum posts since February this year. With your help, we seemed to hit critical mass in September and since then RS has been turning up everywhere, all with rave reviews.

Anyway, shortly after we got started with all this, I realized how intricately all the RS stuff was tied to gut health. I started reading about gut microbes and realized I had no clue on the subject, and no way of knowing if RS was effecting my microbes the way the studies implied it would. Then in May or June, I read about the American Gut Project and my wife and I sent off a samples of our poo to be analyzed. I wish I could have sent a sample off before supplementing RS, but it was too late.

Here are my results, 2 years The Primal Blueprint

and eating approximately 4TBS of potato starch plus 20g of RS foods prior to sample: 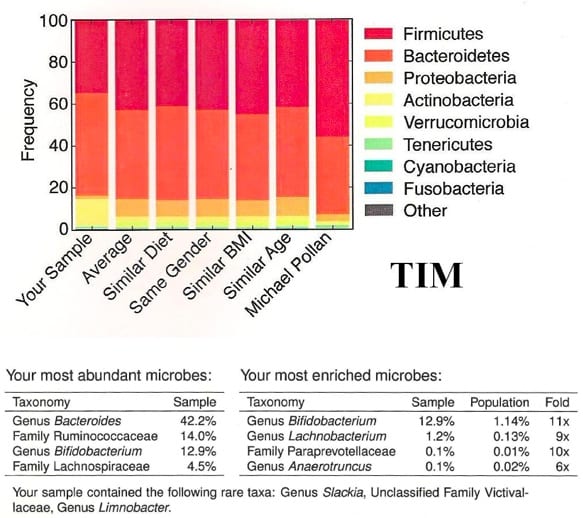 The American Gut Project just sends you a poster with these charts on it, it’s up to you to decipher. I spent a couple hours with my best friend Mr. Google and looked up all the microbes listed. Here are a few things that really jumped out at me:

The report also noted I had some rare types of microbes…

“However, only about 30-50% of people have intestinal bacteria that make equol. Equol may have beneficial effects on the incidence of prostate cancer, bone health skin health and physiological changes during menopause, including reducing severity and frequency of hot flashes and stiffness in the neck and shoulder. Other benefits may be realized in treating male pattern baldness, acne, and other problems because it functions as a DHT blocker.”

How cool is that?

But what is almost spooky, are some remarks from a later blog we did. In the Diabetic Mashed Potatoes blog, I made these claims, that at the time, were purely speculative on my part:

“Generally speaking, though, we can say there are two basic types of gut microbes that we can impact with resistant starch: Bifido-bacteria and Entero-bacteria.

“Bifido-bacteria are the good kind. When you eat yogurt or sauerkraut for its probiotic strains of microbes, you are ingesting Bifido-bacteria. Bifido-bacteria comprise 90% of the gut bacteria of breast-fed babies, but only about 5% of adult gut flora.

“Entero-bacteria are the bad kind. Though many are harmless, some of the more well-known species are Salmonella, E. Coli, and Enterobacter, which is closely related to obesity. Some of these type of bacteria can release endotoxins and cause ‘toxic shock syndrome’. Many of these types of bacteria are also resistant to antibiotics, making them very difficult to deal with. Entero-bacteria can survive in a wide range of environments, even outside the body, and feed on many different food sources–sometimes resulting in extreme gaseous events.

“Studies such as this one have demonstrated that ingesting approximately 33g/day of resistant starch lead to major changes in gut microflora in as little as one week and at 3 weeks, Bifido-bacteria strains had increased up to 10-fold from baseline levels to almost 20% of total gut flora!”

And it’s EXACTLY what my Am Gut shows. My Actinobacteria (family containing Bifidobacteria) is about 18% of my total gut flora, and Enterobacteria (aka Proteobacteria), is a barely discernible thin line.

When I click on the links I used for those claims, I see this about these bacteria types:

“Bifidobacteria -A natural part of the bacterial flora in the human body and have a symbiotic bacteria-host relationship with humans…promotes good digestion, boosts the immune system, and produces lactic and acetic acid that controls intestinal pH. These bacteria also inhibit the growth of Candida albicans, E. coli, and other bacteria that have more pathogenic qualities than Bifidobacteria. Exert a range of beneficial health effects, including the regulation of intestinal microbial homeostasis, the inhibition of pathogens and harmful bacteria that colonize and/or infect the gut mucosa, the modulation of local and systemic immune responses, the repression of procarcinogenic enzymatic activities within the microbiota, the production of vitamins, and the bioconversion of a number of dietary compounds into bioactive molecules.”

“Enterobacteria (Proteobacteria) – Many members of this family are a normal part of the gut flora found in the intestines of humans and other animals…Some enterobacteria produce endotoxins. Endotoxins reside in the cell cytoplasm and are released when the cell dies and the cell wall disintegrates. Some members of the Enterobacteriaeceae produce endotoxins that, when released into the bloodstream following cell lysis, cause a systemic inflammatory and vasodilatory response. The most severe form of this is known as endotoxic shock, which can be rapidly fatal.”

Now, here are my wife’s results…keep in mind she eats a pretty straightforward SAD diet, has been on antibiotics nearly her whole life, and underwent a major surgery 6 months prior to sample. She has GERD and takes Nexium..She eats very few raw veggies, no fermented foods, lactose intolerant, and no extra RS. She’s thin and has good glucose regulation.

[Editor’s note: I did not include the bar chart for Tim’s wife because it looks precisely like all those to the right of Tim in his chart above, so no real info. Hopefully, AmG improves that chart by providing higher resolution for the bottom 1/4″ that counts the most.]

Without boring you to death, here is the theme: There is absolutely no Bifidobacteria anywhere on the report. Her rare species are all pathogens, most that are normally found in the mouth and sinus and not the gut.

Peptococcaceae, is 19 times higher than the average. The link says of it:

“Carbohydrates may or may not be fermented by these organisms, which produce gas, principally CO2 and usually H2, from amino acids, or carbohydrates, or both. They are found in the mouth and in intestinal and respiratory tracts of humans and other animals; they are frequently found in normal and pathologic human female urogenital tracts.”

Thanks Tim. Alright folks, what do you make of that? While not perfect—because we don’t know what his gut flora was like before any of this, or to what extent it was changed by the PB and PHD diets vs. the addition of supplemental RS—it appears the writing is on the wall, especially integrating this. On the other hand, Tim had read enough animal and human studies on RS to predict his results, and the results confirmed that prediction. Moreover, the fact that he has higher counts of some good bacteria and lower counts of bad than anyone else in the study is pretty eye opening.

…And we don’t—yet—know what his wife’s would be were she to decide to go on a Paleo/PHD, targeting RS for some period as Tim has. Hopefully we will. You hold the world in the palm of your hands, wife of Tim :) Thank you so much for allowing him to put your results out there.