When living in Japan throughout the entire late 80’s I travelled a lot to the Philippines and Thailand; and all I ever wanted for a breakfast was some sort of rice dish with egg. In the PI, that was sinangag, and in Thailand, plain white rice and a couple of fried eggs on top—with a side of a very hot watery green chili condiment to dribble on the thing. Don’t know what it’s called.

Coupla weeks ago in my Resistant Starch posts, a commenter originally from the PI found it difficult to contain his elation over being able to eat garlic fried rice, again. And that’s when I remembered having it many times. First time, I made it kinda classic, only with yellow and not green onion, and I like to do the egg Japanese fried rice-style.

So good. The garlic is to sinangag what fine ground black pepper is to many of the Japanese fried rice dishes I had.

So last night, this was my chicken fried rice, sinangag inspired. Sometimes, I like to stage everything before I start cooking. Here’s your list of ‘griedients, in a pic. 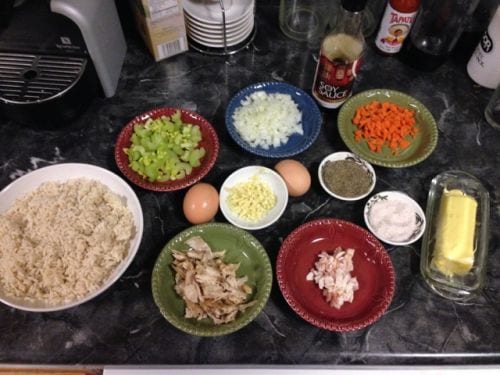 First, a couple nice pats of butter in the wok, then the garlic, just until they just begin to smoke from toasting. Take it off the heat, remove the toasties to a bowl. Then, introduce the bacon into the same oil, doing it the same way. You’ll get a bit more fat from the bacon. 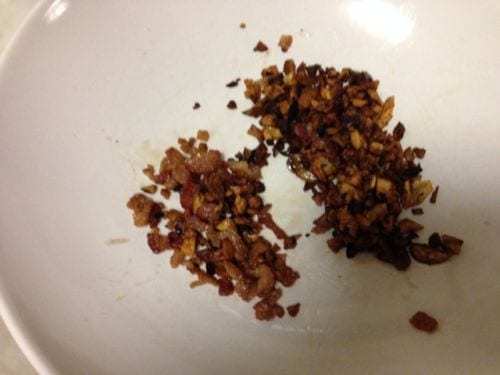 Bacon to the left of me, garlic to the right. Here I am.

This goes back in…at the very end.

I added just a touch more butter (individual thing: eyeball it), then in went the onion. Normally, I’d put in the onion, celery and carrot at the same time…but the celery was already a bit soft from the fridge, and the carrot had been pre-steamed. Soon as the onion was translucent, in went the celery for a while, then the chicken.

Next was to dump in the rice and carrot. Plus, a decent dusting of pepper, pinch or two of salt. Mix it all up well, then spread it over the wok to heat, on high, getting a little crunch on some of the rice. Then, egg time. 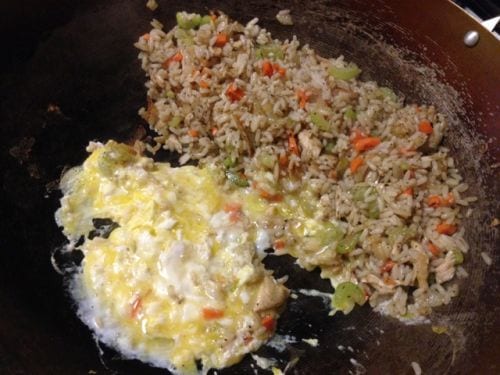 Push the rice aside, make a wet scramble, then mix it all together until the egg is all cooked. At the very end, toss in your bacon and garlic bits, toss nicely, and then just “rain” some soy sauce on it lightly to finish. 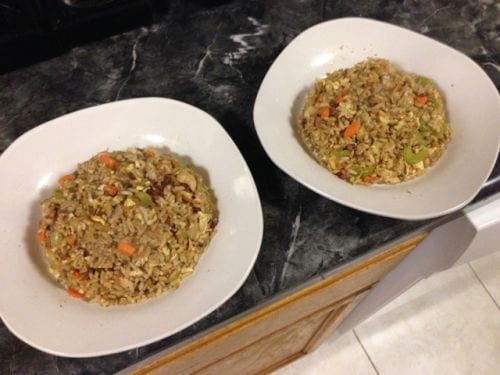 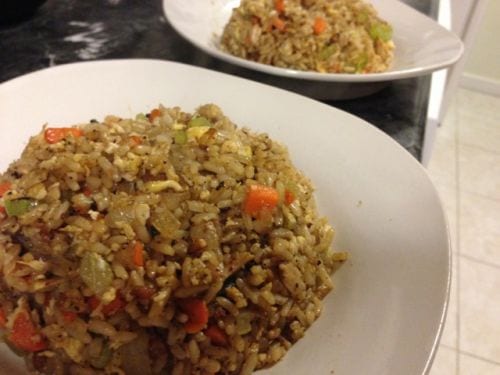 Give it a shot. For breakfast, I want the classic: just garlic, onion and egg. But this makes a great dinner with a few more veggies and a bit more protein.