I Sincerely Want Hillary Clinton to Run For President in 2016. Can She Win?

Which means: Since it’s the dawn of 2014, she’s gottta get her ass in gear soon

I was wondering about it, since she’s been stangely out of the news since she resigned as Chief Executive in the tough job of keeping Planet Earth, The Solar System, Milky Way Galaxy 00000, safe for American “Land of the Free” Democracy in the realm of what is euphemistically called diplomacy. She had numerous publicized heath crises in those years and so I’m figuring she’s popping up on the stage any day now, touting The paleo Diet, and how it made her healthy and sexually attractive, again. Fit to run the Universe! 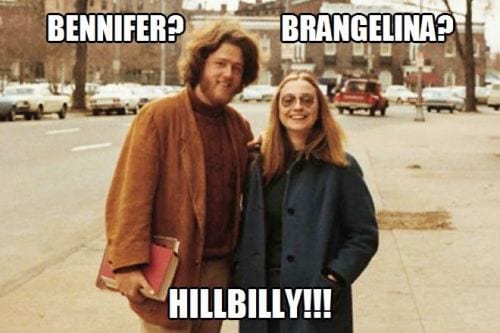 I just Googled, and found an excellent reason she ought to run, aside from the Hillarity that will surely ensue should her shrill insistence on everything rise again, ensuring, most certainly, to remind most male voters of the ex-wife or mother-in-law from Hell.

A report in the Globe magazine claims that Clinton, 66, has a brain tumor. And a source told ShowBizSpy that Clinton has been warned by doctors that running for president could kill her. [emphasis added]

…I truly don’t take stock in the-most-important tabloid press, or the dishonest press. Neither; though I find it amusing how people think and make silly distinctions about how the NYT is more important than The National Enquirer.

…I mainly want to see her run in order to prove myself right. I always lafed at libertarians who rung hands over her potential as President-elect. From day one I predicted she would—no matter what—never be President.

I want to be proven right, and I have never wavered in my judgment on the matter; because no matter how fucking stupid I think is the general population of “voters” (that’s euphemism for Social Masturbators), they are human-animals, too. There’s just something essentially inhuman and alien about Hillary. While Bill is pretty much a typical lying, hound-dog politician and getting a blow job from Monica in the Oval Office was the absolute least that came out—even about Monica—and everyone who’s not a fucking moron knows this, and tens of millions don’t care and explicitly ignore it…Bill is comprehensible. He makes sense. C’mon. He’d be a riot to have too many drinks with.

So it’s a so what? Yes, and that much is clear and on some levels, I agree. I hate politicians for other reasons, but admire their proven abilities—that always and forever have to do with how they so Hillariously make you voters their general bitches. This is all and only entertainment value to me.

Plus, it reminds me about what a pathetic collection of fucktard dumbasses Republicans are, and that always makes my day; but only because they so richly deserve it.

Unless the country is literally on the brink of economic disaster or under attack—from a force that’s not 14th-Century-Dirt-Scratching—they’re like Pee-wee Herman running for President.

…This will become even clearer in the course of time, as young people at large laf at the literal imaginary friends of Republicans and their brainwashed progeny. Democrats are decades ahead on this level of understanding. …If you listened to the podcast I was interviewed in today, I noted that I always listen to young people—all the time, preferentially, and just yesterday, BTW. Bea and I were the oldest by more than 20 years at the Playoffs Party. We loved it the best.

Both Democrats and Republicans will eventually be laughed off the face of the Earth. But Republicans are first. Who can possibly take adults seriously who harbor imaginary friends who talk to them, answer their prayers, tell them anything they want to hear, and that informs their actions? And the pathos goes on.

The most fundamental way to understand the antagonism between Democrats and Republicans is that of the antagonism between children and adults, or parents and their offspring. Republicans are children, politically. They have a constituency that cares about morality, which is good. The problem is, Republican morality isn’t based on rational shit (libertarians ought to have realized this by now). It’s based upon imaginary friend stuff written 2-3,000 years ago—written with that imaginary friend whispering in some author’s ear (Inspired is the chosen euphemism). Rational morality that people agree with at large is accidental, per se. Faith-based is the only true morality. They never really thought it out.

Faith is, of course, arbitrary. Is the antagonism that that arbitrariness engenders, the point?

…And faith trumps any double blind, placebo, randomized, controlled trial that was just published today, 2014—in the same Medical Journal that perhaps published a paper on how to defeat any number of tweaks that Imaginary Friend sacked the world with, for fun, and that killed millions, for fun.

They’re sweethearts at heart, but fucking dumbass stupid: socially and politically. And it goes without saying.

Republicans have been running the scam for decades: that they’re really not all and completely about their imaginary friend. And that’s cool, because in so doing, they expose themselves as the fucking liars they are as months wear on, at this point. They can’t live with their imaginary fiend, explicitly and practically in 2014; but they’re too pathetically petrified to live without him. They fear death, and the loss of a lie-fantasy that everyone they love is going to be rejoined. Sucks, but it’s not going to happen. I don’t really wish it were true—I’d rather just have everyone I ever loved still here. But it’s not reality. Republicans are in a knowledge pinch that’s getting pincher by the week and month! They ought to talk to random 20-somethings like I do, not just those brainwashed in their churches—which, incidentally, I escaped from in 1979: Tennessee Temple University.

Glad I raised a middle finger to the heavens 22 years ago and made sure it helped me live better.

I do adore talking to young people, and every chance I get. I ask probative questions. Do you ever even bother? It’s the only way I know of to predict the future. Yea, yea, yea: they’re going to recognize our wisdom, one day. It’s true. It will be a blend of sentiment and shit you were right about. But they are not going to be anything like a carbon copy and you must understand: they are going to laf at you where you have deserved to be lafed at.

Republicans: non, Flyover-Walmart-Church young people do NOT relate to you. You’re fucktards to them and so very rightly so, and you will never win them over with your lafworthy God & Country schtick. They don’t know it so much as just feel it and live their own deal. Most young people actually didn’t get stupidly fooled into sacrificing their lives and the lives of their woman and children in the dogshit insanity of Iraq and Afghanistan—that no matter how you slice it is not even a potential BLACK on any contrivable balance sheet with all morality tossed out the window.

I think it’s all about religion, ultimately. That’s why an American President with an imaginary friend for real—GWB was probably the first American President in decades to truly believe in it rather than lie for all the morons—Popes have been atheists for centuries—truly got everyone into this. It’s a morass, a nightmare.

Consider what I’ve always thought going all the way back to the Monica scandal, the most serious of all the Clinton Bimbo Eruptions. The Democrat strategists understood something that even if the Republican strategists did too, was impossible to maneuver around or against. That must have been so delicious to the Democrats at the time. What’s more delicious than looking someone in the eye, telling them exactly how you’re going to kick their ass, but they have no options?

Number three is really the crux of the deal. In all of Bill’s shenanigans over decades of being in positions where such was easy, and with good reason to believe it was all pretty true what he did, America didn’t care and that was a proud moment for me in just realizing it. There’s no country on Earth with such a combo of planet killing power combined with fanatical religious fanaticism, and so it ought give everyone comfort that a President can get a BJ in the Oval Office from a 22 yr-old-intern and no matter what the frenzy, everyone ultimately looks away.

In the context of politics, the Democrats knew to give up early on the facts, let the Republicans have them. See, Republicans are entirely predictable, because their playbook is written out of the cherry picked portions of the Bible (…Though the Evil Parts are a standoff, because even if held as metaphor and literature al-la all the Ivory Tower scholars who are 100% left, how to deal with “metaphors” of mass rape, murder, incest, stoning over adultery, slavery, and on and on, besides overlooking the modern-day manifestations…such as the feminists and multiculturalists do now, the former because American men are worse that Taliban men?)

…So, in the end, perhaps Bill Really loves Hillary? Still does?

Why I couldn’t stand her before was her ridiculous condescending elitism, al-la Al Gore, who’s easily the most loathsome condescending person on Earth for me and I would love to kick him in the teeth. Just saying.

After the Monica deal I loathed her even more because of the pragmatic, expedient way in which she dealt with it.

There was a lesson in the Lewinsky affair, in terms of understanding the lust for power. Someone with a shot at it—like Hillary certainly had in spades at the time—can get publicly dragged through the mud in disrespect and shame and any number of things, but the calculated only thing that matters is that Hillary was innocent. A victim. So that’s just another clever thing Democrats understand that Republicans never will.

They only love Biblical victims, and Jesus is their standard of value qua victim. They’re functional morons, getting more dysfunctional by the day, as I watch and laf.

For a Republican, when you’re a legitimate victim, you fucking do something about it and if you don’t try, then maybe you deserved it—unless you’re The Lamb of God. See, even Republican religious metaphors—which they believe literally—can’t help but make you wonder if they have functioning minds. For a Democrat, being a victim is money-as-metaphor. This turns on everything that happens, even right up into the Oval Office.

In short: We’re fucked, and this is why I’ve said for a long time that it’s The Evil Party vs. The Stupid Party. I know where my bet will be placed.

Imagine how pragmatically smart the Democrats are in terms of political maneuvering vs. stupid Republicans with Jesus at the Wheel. No contest. Hell, Republicans are on the dole, or have someone they care about on it and understand what would happen if it didn’t exist.