Kelly Thomas: RIP, Man. You Were Dealt an Injustice By God, And Then By His Children

Kelly Thomas Before & After

By all accounts, Kelly was indeed a broken or at least, very troubled individual. The Wikipedia page—which is a decent source for this sort of thing due perpetual updating and permalink management—puts it like this:

Kelly Thomas (April 5, 1974 – July 10, 2011) was a man diagnosed with schizophrenia who lived on the streets of Fullerton, California. He died five days after an altercation with members of the Fullerton Police Department on July 5, 2011. Thomas was taken to St. Jude Medical Center before being transferred to the UC Irvine Medical Center, where he was comatose on arrival and not expected to recover. He never regained consciousness, and died on July 10, 2011. [2] [3]

Medical records show that bones in his face were broken and he choked on his own blood.[4] The coroner concluded that compression of the thorax made it impossible for Thomas to breathe normally and deprived his brain of oxygen.[5] His parents removed him from life support five days later, and he died from his injuries on July 10, 2011.[6] Officer Manuel Ramos was charged with one count of second-degree murder and one count of involuntary manslaughter; Corporal Jay Cicinelli and Officer Joseph Wolfe were each charged with one count of felony involuntary manslaughter and one count of excessive force.[5][7][8] All three of the accused pleaded not guilty.

So by now, you realize there was a proximate cause to the before and after pic I posted. Kelly Thomas was surely living a high risk life on the streets. Surely, that before & after could have been caused by other street folks, or people who make their livelihood there in the turn between who’s doing whatever they do to stay alive in that particular manifestation of the concrete jungle.

But in fact, though it could have happened like that—indeed far more likely than to you in your comfy home with 2 cars in the garage and 2.5 kids upstairs on their iPads—it happened at the hands of Police that are generally though to be those who protect you from those foregoing potential risks. …Or so the comforting story goes.

Do you have the stomach to see an 8-minute compilation with commentary (here’s the full 34 minutes)? You don’t actually have to watch very much. Actually, just a few seconds.

To taste the ocean needs only a single drop. — Aleksandr Solzhenitsyn

Well, that’s ironic, isn’t it? …I mean, even if you’re a diehard American, police, Thin-Blue-Line fan, a hearter of all that’s military and “adventurous” around the world—either or both—you do always kinda hold to the notion—however “accidentally” wrong might be outcomes, in fact, sometimes—that the aim is, in general, to Protect and Serve?

Am I right? Do I have your premise generally correct?

Ok, then how come these foxes have been on their defense, and lawyered up, for nearly three years? 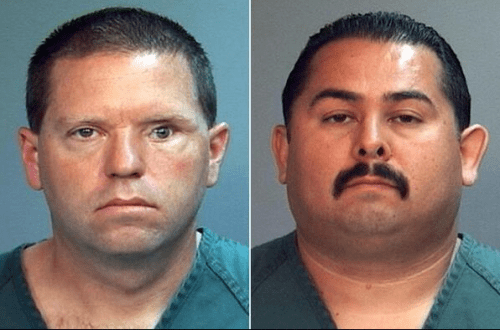 I’ll tell you why.

They’ve been on the defense and lawyered up for almost three years simply because some foxes—even those in league with alpha foxes—couldn’t stomach what was going on in the hen house the betas guard for regular, measured and carful predation for advancement in the fox ranks. While foxes guarding henhouses is almost always to the general wing-flapping enthusiasm of hens who get to cluck, peck and scratch every 2 to 4 years; sometimes, it goes beyond the pale. No use in risking even pathetically dumb hens coming to understand the craftiness of even the lowliest foxes. Alpha predators understand this the most.

The difficulty in designing food lockers in Yosemite is that we’ve found there to be a significant overlap between the smartest bears and the dumbest humans. — A Park Ranger

But the foxes—even with the best of intentions from dissenting beta foxes and a single alpha fox stepping in—couldn’t put on a good enough henhouse-guarding show. In the end, 12 hand plucked hens side with the crafty meta-alpha-foxes. See, 12 hens, generally selected from the privileged hens (2 fowl-mobiles, 2.5 chicks on henPads, Chick-Fi throughout the coup), don’t care much for wayward hens; you know, those who don’t cluck on queue, perfectly right, go and do what they want…so on & stuff. Those hens who march to their own Chicken God are a general annoyance, anyway. They cluck—and might even pluck and scratch—weirdly, when you walk by. They just don’t fit in.

In the end, it’s as though the foxes are too crafty for their own good. The two beta foxes—Jay Cicinelli and Manuel Ramos—were left to the hens with with good riddance but are now back roaming free as fowl; one, so far, seeking to get his foxy job back.

They; that is, Jay Cicinelli and Manuel Ramos, were found not guilty of all charges on Monday, by a jury. It’s purported to have been a jury of their peers. Well, that’s certainly possible. How connected are the jurors, personally, to the small Fullerton government in various ways and if not directly, via friends and family? Or, was it just a further manifestation of hens letting their favorite foxes off the hook? Or, are the homeless asking for spare change annoying them a bit to much?

I don’t know, but there’s a chilling element to it. This enters dangerous social ground. Observe that you can’t even get a conviction with nauseating video evidence that isn’t even disputed on raw facts—these two guys beat the guy to a pulp, he died as direct result. It all turns on foxworthy legal technicalities and instructions to hens clucking as jurors. Police are trained to keep saying “stop resisting” when they’re beating a face to a pulp, such that every punch is defensible on the grounds of “resistance” when hands go involuntarily up to protect your face or other stuff that’s kinda essential to you life.

…Or, when being jolted by 1/2 million Taser volts at low current, convulsing, and just a bit too preoccupied to obey orders. And where not obeying any order constitutes a valid henfense for anything done thereafter, at foxy discretion.

…I kinda have a deeper understanding of the Rodney King Riots of ’92, now. At the time, I thought it was over the top (some surely was, on individual levels). What I didn’t realize is that the video of the beating was such a lottery ticket (I saw it on French TV, at the time).

Now, I realize it was but a mere taste of the Ocean.

This stuff has been going on for millennia. Yes, thousands of years.

Now, you get to see it every day, and there are dozens of examples almost every day. I could post a dozen new atrocities everyday, captures by average folks who are there on the scene doing their part. Keep your phonecam handy out there, folks

Or don’t worry, be happy, hens. You’ve still got your 2 fowl-mobiles in the garage, 2.5 chicks in the rafters, and life is good. You have “protectors,” and who ends up as soup vs. a molting life of bliss turns on statistics and your ability to look just like every other hen…to foxes.

All you have to concern yourself with is that they go after anyone but you.