One cool thing about having my style of blog that I get to have so many nuts as commenters. They’re distributed amongst the geeks, nerds, ne’er-do-wells, muckrakers, slackers…and plain ol’ assholes, like me. My comment sections are truly representative of the misfits of society, which is why they’re a perfect fit for Free the Animal.

From time to time, the geekery reaches such insane levels that it has to have its own post. Here’s “Duck Dodgers.” Asked him why that, and I guess it’s some Buck Rogers deal. Told you my commenters are weird.

He’s been digging up stuff about Tigernuts, also known as Chufa. It’s a big deal in Valencia, Spain where they make Horchata from it. Ok, here’s Duck.

A new paper from Oxford University, published earlier this month, hypothesizes that between 1.2 – 2.3 million years ago, early human ancestors “only needed to spend some 37% – 42% of its daily feeding time (conservative estimate) on C4 sources to meet 80% of its daily requirements of calories, and all its requirements for protein.”

The main “C4” source was believed to be a tiny starchy tuber that is safe to consume raw, has twice as much starch as a potato and a fat profile that is similar to olive oil. The tuber (Cyperus esculentus) is a wild weed found in Africa, and is commonly called: tiger nut, chufa sedge, nut grass, yellow nutsedge, tigernut sedge, or earth almond. However, this is no nut—it’s a very starchy tuber with a nutrient density that rivals animal meat and a caloric ratio that mimics human breast milk.

According to the author of the paper, Dr. Gabriele A. Macho:

I believe that the theory—that “Nutcracker Man” lived on large amounts of tiger nuts—helps settle the debate about what our early human ancestor ate. On the basis of recent isotope results, these hominins appear to have survived on a diet of C4 foods, which suggests grasses and sedges. Yet these are not high quality foods. What this research tells us is that hominins were selective about the part of the grass that they ate, choosing the grass bulbs at the base of the grass blade as the mainstay of their diet.

Tiger nut tubers have a low glycemic index and its starch grains have Resistant Starch properties that is similar to that of maize, which is ideal for a tuber that is safe to consume raw for energy. If the RS content of tiger nuts were higher, it would be more difficult to extract energy from the tuber. But with twice the starch of a potato, it would appear that paleo man consumed a healthy portion of Resistant Starch while eating tiger nuts.

The wild and weedy tiger nut tuber of Africa was among the first crops to be cultivated by man, at least since the 4th millennium BC in Egypt, and later for centuries in Southern Europe

Zohary and Hopf consider this tuber “ranks among the oldest cultivated plants in Ancient Egypt.” Although noting, “Chufa was no doubt an important food element in ancient Egypt during dynastic times, its cultivation in ancient times seems to have remained (totally or almost totally) an Egyptian specialty.” Its dry tubers have been found in tombs from predynastic times about 6000 years ago. In those times, C. esculentus tubers were consumed either boiled in beer, roasted or as sweets made of ground tubers with honey. The tubers were also used medicinally, taken orally, as an ointment, or as an enema, and used in fumigants to sweeten the smell of homes or clothing.

And here’s where the entire ancestral health community can re-discover an ancient prebiotic beverage called “Horchata de Chufa” that is eerily similar to Tim Steele’s “potato starch in water” recipe.

From a study on the properties and applications of tiger nuts:

“Horchata de chufa” is a sweetened water extract of tiger nut tubers (C. esculentus ), which is very popular in Spain…”Horchata” is a nonalcoholic beverage of milky appearance derived from the tubers of the tiger nut plant mixed with sugar and water…The “horchata” production requires a soaking process of the tiger nuts of about 8h, the grinding of the nuts, pressing of the mass, and mixing with sugar (between 100 and 120 g/L)…Natural “horchata” has a pH in the range of 6.3 to 6.8 and is a rich starch beverage. Consequently, it must not be heated above 72C as this would cause the starch to gel and would alter the organoleptic characteristics of the product. “Horchata de chufa” is of high nutritional quality and therefore has great potential in the food market, limited only by its very short shelf-life. The fat is rich in oleic acid (75% of total fat) and linoleic acid (9% to 10% of total fat), and arginine is the major amino acid, followed by glutamic acid and aspartic acid. With the exception of histidine, the essential amino acids in natural “horchata de chufa” are higher than the amount in the model protein proposed for adults by the FAO/OMS.

But, wait. It gets even better:

Tiger nut milk or “horchata” can be drunk by diabetics for its content in low-glycemic carbohydrates (mainly starch) and due to its arginine which liberates hormones that produce insulin. Tiger nut milk is also a suitable drink for celiac patients, who are not able to tolerate gluten and also for the lactose-intolerant who stay away from cow milk and many dairy foods. It could also be recommended for those who have problems with digestion, flatulence and diarrhea because it provides some digestive enzymes like catalase, lipase, and amylase.

Yes, a prebiotic starchy beverage that helps cure flatulence, promotes SCFA production in the colon, and is safe for virtually everyone.

So, Just how old is this starchy prebiotic beverage? According to Wikipedia:

In southern Europe tiger nut has been cultivated for several centuries. It seems to have been introduced in Europe during the Middle Ages by the Arabs after their expansion across the north of Africa. There are written records from the 13th century, which mention the consumption of a drink made from tiger nut in some Mediterranean areas, mainly the Valencia Region (southeast of Spain). This beverage could be considered an ancestor of the modern “horchata”.

Not only did paleo man gorge on these starchy tubers. And not only did he consume healthy portions of Resistant Starch. But, Tim “Tatertot” Steele’s own potato starch mixed in water concoction (Horchata de Potato?) is reminiscent of an ancestral prebiotic raw starchy beverage that has been enjoyed for a very, very long time.

As for nutrition, this is one nutrient-dense little tuber. Check out how it stacks up against red meat: 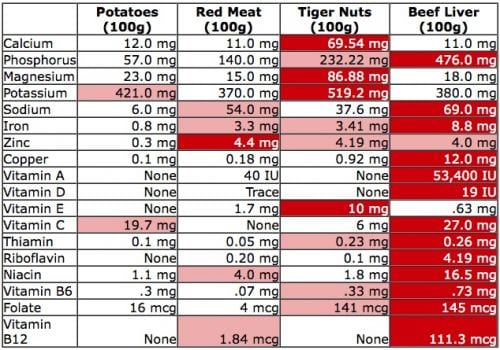 Of course, one cannot eat liver every day, so it would seem that tiger nuts would have been an ideal staple for daily nutrients in the Paleolithic diet.

That could explain the human tendancy for sweets. Tiger nuts probably would have tasted like candy to paleo man.

How about fat? Tiger nuts have plenty and a fatty acid profile that is nearly identical to olive oil:

Note the similarity to human breast milk. Even Paleolithic toddlers could have thrived on pre-chewed tiger nuts.

Health benefits are impressive as well.

C. esculentus had been reported to be a “health” food, since its consumption can help prevent heart disease and thrombosis and is said to activate blood circulation. It was also found to assist in reducing the risk of colon cancer. This tuber is rich in energy content (starch, fat, sugar, and protein), minerals (mainly phosphorus and potassium), and vitamins E and C thus making this tuber also suitable for diabetics and for those intent on loosing weight.

Yep. Tiger nut tubers are safe for diabetics, have been shown to reduce colon cancer, are a good source of prebiotics, have a low glycemic index, and has even been shown to help with insulin resistance and metabolic disorders.

The tubers are gluten free, have no traces of nut allergens (despite their name) and are a healthy addition to virtually anyone’s diet.

For those who want to get an idea of what these tiny tubers looked like, and what they were like to grow, here is a good resource.

Addendum: Another similar C4 source could have been Cyperus rotundus also commonly called: coco-grass, Java grass, nut grass, purple nut sedge, red nut sedge, and Khmer kravanh chruk. However, in contrast to the sweet tigernut sedge, Cyperus rotundus was quite bitter and is better known for its medicinal qualities.

So, where do you get Tigernuts. I’m glad you asked. Right here, and if you order via this Amazon link I get a bit or two and it costs you nothing more: TIGER NUTS. There are different sizes, peeled and unpeeled, so once you hit the link, feel free to shop.

And don’t be surprised if you get a phone call from the CEO (“Chief Nut”) within a short time of placing your order. I did, and so have others as this has been bouncing around in comments. I have two 12oz bags on the way, the peeled and the unpeeled.

Let us know what you think. I’m expecting good things.

Update: OK, so my two packages arrived just a bit ago, a few hours after posting this. I got both the peeled and the unpeeled, 12oz each.

I’m blown away. I’d sooner call this candy than a nut or a tuber—or fruit, I suppose. They are so damn sweet. I like the unpeeled the best. They’ve got more chew. From some of the stuff I had read I had expected them to be hard, like a half popped kernel of popcorn. Nope, just chewy with a texture.

Pretty amazing. It blows my mind how this is not a huge agricultural crop.