Remember Michelle from a few days back, the one who  presented at the hospital with a BG of 680, diagnosed diabetic (type 2) ketoacidosis? By way of review:

I started upping my carbs two months into my personal n=1 PS experiment that started in November and now eat between 100-200 grams of carbs (tho I’ve had days where I ate up to 600) and my blood glucose per my meter is great. I ate a mound of Richard’s garlic fried rice with a steak and green beans tonight, and my BG before: 95, to one hour after: 110. Two hours, down to 90. It seems like the more carbs I eat the lower my reading goes.

A little bit more about her:

Michelle Shelton of Coastal Oregon, where the sun never shines and the mold is deep and perpetual. Maybe I’ll get a stalker or something.

Really, put whatever you want. I just hope they can see the difference. There really is, trust me. I feel REALLY different, in a great way.

She has a blog: Crop Circles in the Carpet.

A couple of days ago I put up Charles Richardson’s face recomposition photos, and principally because I had just begun noticing the same thing in myself. I knew what I was looking at immediately. I’ve been having face pics sent to me by readers since 2008. I know fake and contrived. This was not.

But, of course, it brought out all the hand wringers, the generally entitled; those who believe, for whatever reason, that I or Charles owe them something. You’d have thought one photo they didn’t like because of lighting differences was enough to undercut 3 decades of research and thousands of studies.

I put this up late last evening so many of you may not have seen it, but you want to make sure you do: Resistant starch and energy balance: impact on weight loss and maintenance. It’s a review of all the literature—animal and human—where diet and weight loss were being looked at. The punch line, if you can believe it, is that RS, while giving a host of other benefits, is not a weight loss tool. Why? Because it increases lean mass! Get it? IOW, technically true, but misses the point. The gold standard is body recomposition, fat loss combined with lean gain, the scale is just a number.

Michelle posted in the comments.

Holy cow. I think I might have a fairly good picture set as well. I took a pic on Jan 26 of myself, and just went and looked at some other camera phone pics and found one I took on Nov. 5, a few days after I started PS. My face was really swollen in the Nov 5 pic, and I only realized it now looking at the Jan 26 pic. I did not lose weight, I gained it but I actually look thinner. How would I go about showing my pics? I don’t care who knows who I am; I am officially nobody in this world 🙂

Well, owing the reaction to Charle’s non-professional-studio-photogapher-quality lighting and color matching, Michelle tried to make sure there might be something for everyone to judge. So here they are, three sets. 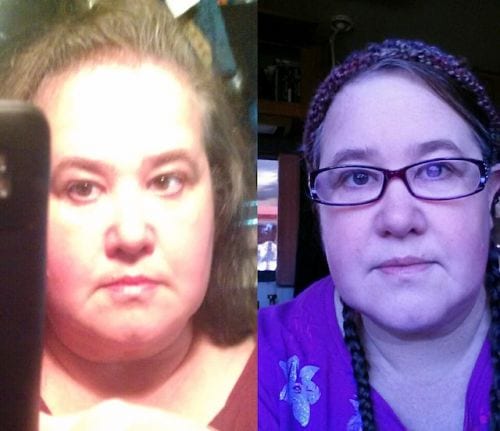 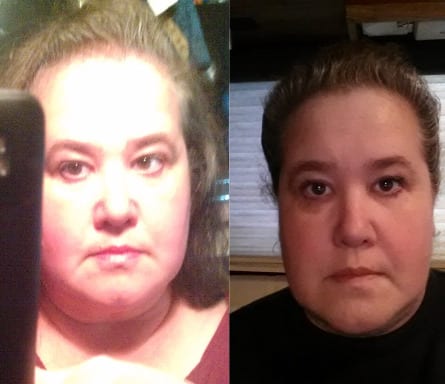 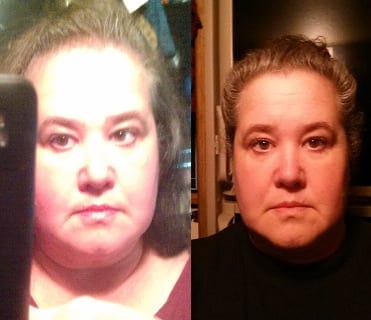 About the photos, she adds:

How about this? I don’t think it looks as dramatic as the other photo but that’s what I get for drinking three beers last night, lol.

I am sorry I look so grim but I just read the comments about Charles’ pic and I don;t think anything will satisfy that crew.

I am going to take one more pic in a few to see if I can get the light to match and I will send that if it looks different. I think the pic I took just now shows that my face has narrowed quite a bit, but maybe it is just me.

In terms of the ‘grim’ look, just tell people it’s your Kathy Bates in Misery impersonation. 🙂

Michelle, if they don’t know what they’re seeing, then I think you know what you can conclude about that, especially given a 10 pound weight gain, which, coming full circle would be predicted by the research I cited. In addition to lowered inflammation which I’m sure is a contributing factor, the only way to pull that off with 10 pounds gained is a body recomposition. Lean is denser than fat, so you lost some fat, gained some lean, for an overall net gain and better appearance.