Micro-Social Medical Insurance and Helping Out One of Our Own

Woman, a PhD biologist, raises over $21,000 in a few days for her husband’s uncovered brain cancer care. Interested? Then read on.

I got an email yesterday.

This is interesting (but sad). Monica, who is a PhD in biology…is doing some amazing Internet research to find out about her husband’s cancer to help to help him… 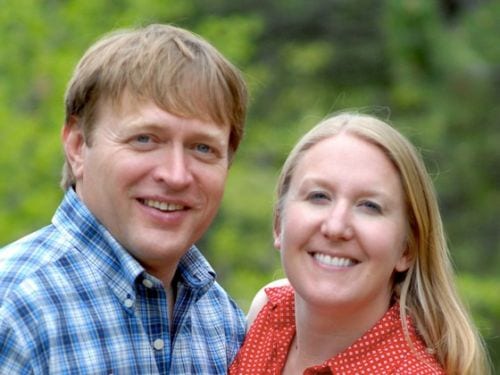 When I clicked the link he included and saw the pic, I said to myself, “I know that Monica-sweetheart;” and it’s for a long time, now (back to 2007). Rest assured; she’s been duly—though lovingly—scolded for not coming to me to ask how I might help in her time of need.

Sports fans: she has contributed no less than 250 times to the Commentsphere on this very blog that enriches—or just plain fixes—the posts I write. Most notably, this PhD biologist—who specializes in mycology (mold, basically)—smelled a moldy rat, just like I did, in all that media-hype a while back over various McDonald’s products that don’t spoil.

In a series of YouTube videos, she demonstrated that all you need is what’s floating in the air around you, and moisture, then anything goes moldy. She told me in an email: “you can grow mold on polycarbonate, if the conditions are right.” Do you really have to ask why, in all of those breathless media reports of people hauling out desiccated McDonald’s meals, that they don’t consult with an actual mold scientist? She was amused as she did those videos I watched.

Monica ruined the whole damn story. I bring that up only to demonstrate that she has a skeptical mind and is worth a hearing out.

While Monica is skeptical, she’s also of open mind in a veritable balancing act between conventional medical practice and conspiracy theory holistic scientism. On the one hand, you’ve got a food, drug, medical and State establishment that’s top-down command-and-control for the chief purpose of protecting and enhancing the food, drug, medical and State establishment that throws a prosecutorial bone to teh peopolzez incrementally—such that they’re foolishly assured it’s their interests that are the top priority, and the moonezez and sooper-duper pow3rz don’t matter.

On the other hand, you’ve got whackjobs galore, from every insane corner.

But, has anything been left on the table by either side…either dismissed by the former as unprofitable, or by the latter as unDogly, or unnaturalz?

I think she’s fully competent to try to sort that out, and she has the biggest motivation to do so that anyone can experience in a lifetime beyond saving their own life: trying to save the life of a loved one; a one that’s a piece of you.

I’ve kept you in suspense long enough. Here’s Robb & Monica’s story: A Road Less Traveled – Robb’s Journey to Wellness. I’m not going to excerpt. Either you read the story or you don’t, and this was just another of Richard’s blog posts for you. That’s fine, and I know Monica would say the same. Your choice.

It’s a story of a brain cancer considered incurable in America, 2 months to live—‘we’ll use some stuff to extend you a few months, keep you comfortable’…opioids are off the table though; we have a drug war, and the religious right’s vote is essential. Y’know, the “intention to treat” collectivist catechism (eggs. omelets. break a few. expendables. good of society at the expense of its unlucky individuals…that sort of thing).

Only thing is, there are some long-term survivors of this particular cancer (glioblastoma multiform—GBM) highly correlated with those who do their own research…though not in numbers that would interest a patent filer—the very first thing that gets done in order to enjoy a State-force-backed monopoly on revenues.

I turn your attention to such survival results backed only by such spurious, non randomized correlations—of the sort that will never pass muster with the National Institute of Health. Because of what Monica aims to do in light of her own personal research into what might be viable sans bias—as time is short, resources precious and limited—she’s estimating it will cost about $50,000. Insurance covers none of it—though I’m sure standard pain killers—no opioids though—will be covered for 2 months to whenever.

Thanks, Ocommie! …I mean, since it’s one for all and all for one, right?

…While I would hate it for Monica’s love to stand as an example for what could or might be while not around to enjoy it: this is the future. It is, unless humanity isn’t even worth saving, and someone ought just hit the reset button and try again.

We are social animals. As much as it pained Monica to ask for money from others, she had that potential scorn to weigh against the love of her husband. Add to that, most everyone is conditioned in the collectivist way, which I’ll state without euphemism: just let the government steal it. They know how, and from whom to steal, as stock in trade; or, as mere “Statecraft,” so called. Maybe you’ll get lucky in all the complexity.

The codes for stealing just right amass volumes. Whole billion-dollar industries of tax attorneys and tax accountants—and now, software companies—are built around stealing by a precise code that gets more complex every year, such that “professionalism” is necessarily baked in the cake. It even comes replete with clever penalties for technically stealing wrong, or being stolen from—such as to make stealing and being stolen from so complex as to not even imagine it’s not “just…right.” And no extra charge, so long as you don’t fuck it up. The penalties are usually “minor,” though. It’s like a parking or traffic ticket, when you weren’t hurting anyone.

So first, I’ll ask you: How can that possibly be, on the veritable eve of balloons falling in a stadium over what a wonderful success Ocommiecare is? Do you doubt that balloons will eventually fall in a stadium over it, in spite of the fact that an administration with billions of stolen or just printed dollars at its disposal can’t even create a functioning website for just Americans that the international Amazon.com wouldn’t just laf at? And this, from a nation that quelled Nouveau Industrial Adventures in the 1940s worldwide?

Well, I digress, and Monica doesn’t want stolen money anyway. She needs some money freely given though, from friends, family and the extended who care. In return, she vows to make everything she has found out public, and for wide publication. And so, you give because you just care, or because it’s important to me and I asked (I’ll be hitting the PayPal too). Or, if that doesn’t do it for you, what if she learns something?

Remember what her skills and abilities are, combined with her motivation. We all want medicine to advance, but would you rather give it to someone who’s going to spend 90% of it on advertising for their State-monoly-patented formula that won approval by your masters, or have 100% of it go to midnight-oil Googling and researching by a PhD biologist with all the skin she has to give in the game? Would you rather it go to 2-martini lunches with knowing winks, nods and huckster handshakes, or to someone for whom it’s literally a matter of life & death; and, uh, she knows what she’s doing?

I know, you have no choice but to “give” to the former, while having complete choice to ignore the latter. It’s tantamount to double taxation. But I’m of a mind that the only way to tame this beast is to become micro-socialists. In whatever way you connect with someone, wherever, it’s that that is your value, the value that you wish to promote. Family. Friends. Friends and family of friends and family. Commenters on a blog you read regularly.

Or from wherever your heart gets nicked.

…Imagine a world where we could all purchase catastrophic insurance plans for cheap. Depending on your personal circumstances, could be 2, 4, 6, 8, 10,000 dollars or more you have to pay out-of-pocket in any given 12 months, before insurance kicked in a dime; but then it pays 100% to the death. Think about it. Simple. Ought to go on one form that only fills half of an 8×11. Suppose lots of people do it, it’s competitive cheap, insurance companies make billions, and we shut our envious faces and clap about it.

And perhaps in that world, insurance companies would be far more open to anything that might work: crowdsourcing, alternative therapies, plausibility…things that just work without a full understanding as to why. Maybe, they’d even lobby to make it such that Monica and Robb wouldn’t have to cross the border from The Land of the Free to one of those Dog Forsaken countries just to obtain an experimental therapy they’ve deemed worth their risk, given the urgency of a crisis that means everything to them, but nothing to a hierarchy of power and influence.

Monica will monitor comments and I’m sure, will be willing to look into any ideas she hasn’t already looked into, should you suggest them. Understand, she is on a life-saving mission that the American Land of the Free medical establishment has rendered hopeless per statistics, and profit and loss statements. It’s open only for to-be-journaled studies by players with millions, or drug companies vying for a patent-monopoly, backed by hundreds of millions. So, dozens of players on one hand, a handful on the other.

Just few real players makes it nice and tidy in any centralization scheme.