Read both published articles. Both have many merits if you maintain The Big Picture and just step off Your High Horse for a few minutes. This is what education is all about.

…But first, as an aside, gratuitous name dropping (my version of a message from sponsors). I exchanged an email or too with Peter Attia last week and told him, “tell Gary I’m not doing ‘XYZ thing,’ anymore;” that thing being what Gary scolded my ass over when he called me over right after I took this pic on the campus of Harvard at AHS12. Peter knowingly lafed back. 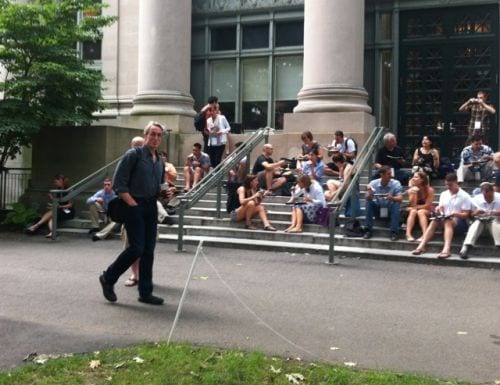 Some longer time readers might guess. Water. Bridge. Under.

I happened to hit the sac early last night, about 10:30, slept through with a single wakeup for a relief. And then, a few hours later at 5:15, I awoke to do what I often like…to just lay in peace for a while and think about what sort of blog I might love to write that day (conception, implementation, publish in hours…totally unlike book writing). But: blank. I’m so far gone into the book that’s scary approaching 400 pages with scary hundreds of refs (thanks Tim and Grace—our new science editor…a mention also for Gabriella Kadar, DDS as well, helping on a chapter about microflora other than the gut) that I find it difficult and curiously futile, even counter-productive, to put a lot into the blog. I’ll resolve & compromise. No serious worries after 6am.

Gary wrote in The New York Times (yea, again!): Why Nutrition Is So Confusing. Money quote, but just read the whole damn thing, or I’ll get pissed. It’s an uncharacteristically short piece, for Gary.

Meanwhile, the research literature on obesity has also ballooned. In 1960, fewer than 1,100 articles were published on obesity or diabetes in the indexed medical literature. Last year it was more than 44,000. In total, over 600,000 articles have been published purporting to convey some meaningful information on these conditions.

Dr. David Katz weighed in, and no matter your love of Gary, if you read all of Gary’s read David’s, too: Diet, Weight, and Health: Confused Only If You Want To Be! Here’s my assessment of the money quote, trying to be as fair as possible, given my own bias:

For now, let’s note the following. The advice to cut fat was intended to direct us to the naturally low-fat foods that existed at the time, namely vegetables, fruits, beans, lentils, whole grains, and lean meats. Does anyone doubt that if America ran mostly on such foods (rather than, as Madison Avenue seemingly now contends, donuts and coffee) our health would be much better? I do not. […]

I would argue we are not, and were not confused – we are, and were conflicted. We were, and are, active participants in a massive collusion at the level of our culture. We wanted to have our low-fat cake and eat it, too. In other words: we probably really knew all along that “low fat” advice really meant eat more mixed greens, but we WANTED it to mean: keep eating pastrami, and dilute the calories with low-fat cookies. And so we did. And here we are.

Gary admits to his bias in his piece (refined grains and sugar), and I’ll go out on a limb and say that that for Katz, probably processed food in general, implicitly.

I’ve been watching Gary forever and to me, his frustration is palpable. Yet, he is a conspicuously Big & Tall, thoughtful, and kind man. He’s pro. He thinks hard and long before he writes, quite unlike me. I have a daily, self imposed deadline. No excuse, no material comparison—and I’m not even sure “material” is the correct modifier.

David Katz; I don’t know much about, read a handful of articles here and there. Here’s what I like about his piece:

This part of it rather puts Gary to task, in my view, because both the low carb and low fat bullshit will be history, dead and buried, and you can mark my words on that. Everyone, long time ago ought to have dismissed it out of hand. “What, you want me to eliminate roughly a third of food and make up the difference with the other two in some curious way?”

That’s what everyone ought to have realized and verbalized. Times. Ago. Long.

Here’s what I find suspect, or gratuitously self-serving, about Katz’s piece though.

I used to used to use the term “Grant Whore” a lot. Because, Gary scolded me on the campus of Harvard over the c-word (I think), it’s always on my mind as I write (…’what would Gary’s mom think’…yes, he invoked his mom in that scolding). It was good and gracious that Gary took the time to do that for me. He didn’t have to. Took me a few months but I took it to heart, eventually, mostly—with only the rarest relapse. 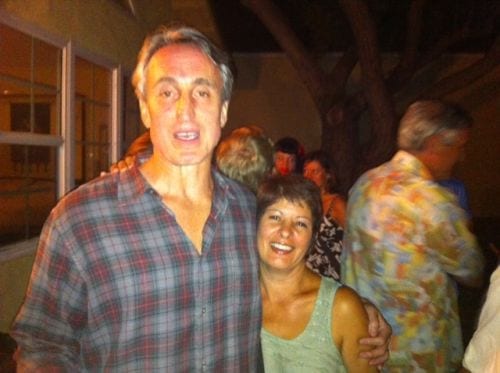 Gary Taubes and My Wife Bea

I’ll have more to say, but to wrap it up for this nearly daily installment of FTA, I have read the full texts of hundreds of studies of the sort Dr. Katz’s livelihood depends upon, for about 6-7 years, now. Funny thing about them. Initially, they’re written in Greek. Keep reading them, and you lean Greek; Or, at least, enough to get by so you can order up a meal and get your utilities paid.

Gary mentioned in his piece that 600,000 published studies have been done.

Anyone care to bet me that there’s even a single lone one in 600k that says anything like.

I’ll bet I Grok Gary better than you.