There are many who just hate it when I tout this sort of thing and they mock me for doing it. So, that’s why I’m posting it. I love hate. …Perhaps more than I love love.

Here’s what you’ve gone and did. 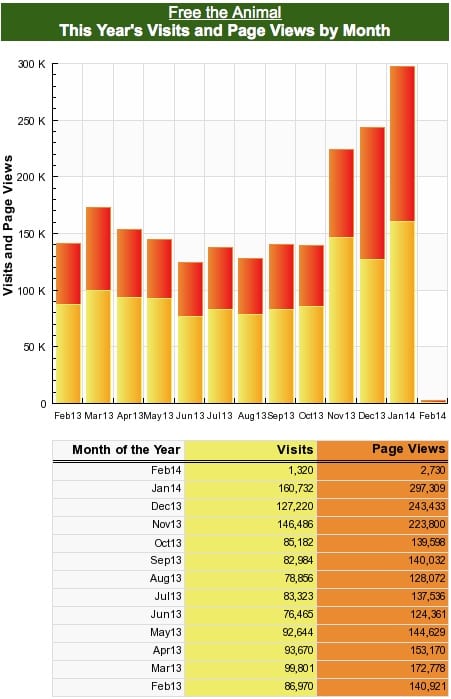 Unfortunately, owing to a freak WordPress fart Thursday afternoon that took until Friday morning to resolve (Thanks Alec and Karol of Foliovision, in Bratislava), there’s about 5,000 visits and 10,000 page views not accounted for, so call it 165,000 visits and 307,000 page views. Absolute unique visits were about 85,000. That means: 85,000 unique individuals read stuff here in January, most probably on resistant starch. You might note that if one Googles ‘resistant starch,’ that tag link is the top entry, even above Wikipedia. Hey, if I can best my old USENET and email friend Jimbo Wales on something in Google, it’s a good day.

Prior to the surge that began in November, the previous record was about 120,000 visits in Jan of 2010, which was a surge from Dec 31, 2009 links from boingboing & FARK, where my monthly average was 40,000 visits. Took down the server and Alec, mentioned above, left a New Year’s Eve Party to get me back up and running.

In other news, my Alexa Ranking is back to better than ever. Back in 2011, it was at about 90,000 (out of 650 million websites in the world). Then—perhaps because of a change in algorithm—all the paleo sites (including Sisson, Wolf, et al) lost about half their ranking almost overnight. So, Sisson went from 3K to 6K, Wolf 30K to 60k, etc. I went to about 160K and it declined to about 180K at its worst. Happy to report it is now back to its best ever, about 83K.

Thanks in particular to:

Alright. The times they are a chaingin’ and obviously, predictions of my demise have been greatly exaggerated. Don’t some of you just hate that? I’ll bet you do, and make no mistake: I’m rubbing your faces in it and lafing.