Sunday Starchy Breakfast: Beans, Potatoes, Eggs and a Side of Insulin Sensitivity

When It’s not a morning smoothie of prebiotics and probiotics (see here for the recipe), this is now closer to the breakfasts Bea and I eat around here. It’s taken a while to get used to eating this way rather than eggs, meat, maybe a piece of fruit. In spite of blogging now for a while about how I don’t think very low carb diets are optimal long term, it has been really difficult to get out of the practice on average.

Beans with eggs are the bomb for breakfast, as well as other starches with meals. As such, both the wife and I have gone from fasting blood glucose numbers of 100-120 down to the 80s for her (80 this morning) and 90s for me (96 yesterday, didn’t check today). 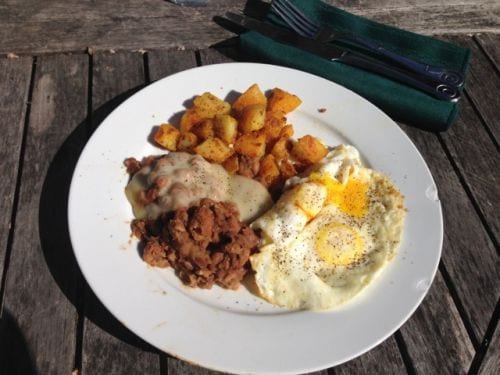 Some cooked and cooled pinto beans from the fridge, refried with a little butter, half slice of swiss melted on top. The potatoes were leftover from baked potatoes last night (yep, we had potatoes last night, too—along with grilled pork steaks, haricot verts, and hollandaise sauce…all courtesy of our friends).

The potatoes were chilled in the fridge overnight, then I peeled them, chopped them into cubes and fried them in Red Palm Oil. If you’ve never used red palm oil, you don’t know what you’re missing. I use it often for frying potatoes and doing oven fries. Has a great flavor and is excellent as a condiment in terms of a dipping sauce or a salad dressing. Goes great on scrambled eggs. And, it’s truly red. Those are russets, not yellows.

So anyway, that was my breakfast and Bea had just a little less starch, with one egg. Nothing else, we both drank water. At the 1hr point, I measured 149 and at the 2hr point, 129, and at 3 hours: 95. When I first got a meter and began paying attention, I’d sometimes see 160s. Probably, if you have physiologic insulin resistance brought on by chronic LC, as both Bea and I had, then you’re going to have 10-20 points more on your prostpranidials, maybe more. I once hit a 194, and now haven’t seen anything over 150 in a while.

Bea didn’t test at 1 hr but at 2 hours she was 105. Interestingly, she tested 130 yesterday at 2 hours after eating half of a 4-egg omelet with cheese, some hash browns and a biscuit at a restaurant. Today’s meal was a LOT more carbs, but they weren’t grain based, not cooked in crap oils, and there’s resistant starch and fiber.

Sometimes I wonder if VLC is a self fulfilling prophesy with folks in terms of BG. What I did, having an idea of what I was measuring, was to put away the meter and then start trying to get in starches almost every meal and then a couple of weeks later, picked it up and did some tests and found I had greatly improved across the board. Had I been like so many I see in comments, I would have never gotten that far, unwilling to go through the process, getting freaked out by “hi” readings that were actually caused by the self imposed insulin resistance I’d given myself—not from eating too many carbs, but by eating far too few.

So imagine this. Person goes LC, loses weight, gets on forums, everybody is talking about BG meters and how bad carbs are. It’s like: “I can’t eat any carbs other than non-starchy vegetables. I had an indulgence the other day of a few slices of pizza and my BG shot up to 160!” Person becomes concerned with all these anecdotes, goes gets a meter, confirms the exact same thing. Prophesy fulfilled. Welcome to the broken club.

And they’re stuck, because everyone will tell them “see, you can’t eat carbs. They’ll make you diabetic!” And never is it considered that insulin sensitivity has been shot from chronic dietary starch and glucose starvation, and what people are seeing is not type 2 diabetes but ironically, a condition they’ve brought on themselves where the actual cure is in the very thing they believe to be the cause!

Frankly, I’d drop the BG meter for a month, drop the scale too, and get a daily average of 150-200g of carbs—not counting fiber—from rice, beans, potatoes, fruit, maybe even a little raw honey. Prepare those foods so as to maximize Resistant Starch, and consider supplementing as well. Then, after a month, see where your numbers are.