Does Wheat Cause Coronary Heart Disease?

This post is contributed to Free the Animal by French IT Engineer, Alexandre Cesaro

Coronary heart disease (CHD) is the leading cause of deaths worldwide – killing 7 millions people every year. In the following text, we will see that wheat consumption is probably a risk factor for CHD.

Why? Because observational studies consistently find that whole grain consumption is associated with a decreased risk of CHD. Do these results contradict wheat consumption causing CHD?

Are Whole Grains Protective Against CHD?

According to this study:

Whole grain intake consistently has been associated with improved cardiovascular disease outcomes, but also with healthy lifestyles, in large observational studies. Intervention studies that assess the effects of whole grains on biomarkers for CHD have mixed results.

Indeed many studies show that whole grain consumption is associated with a decreased risk of CHD. But these studies are observational and can only show correlation but not causation.

In fact there is an health-conscious population bias in these studies: for example people consuming the most whole grains also exercise more and smoke less: 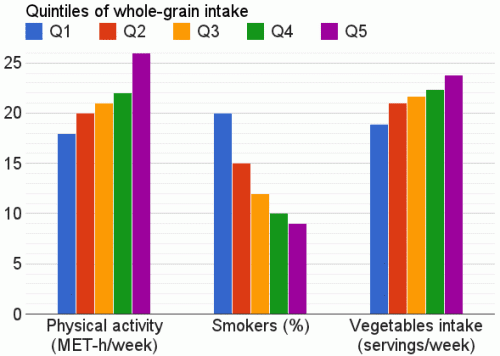 Data from Majken K Jensen et al., Intakes of whole grains, bran, and germ and the risk of coronary heart disease in men, 2004.

Of course researchers adjust the data for these risk factors. But it is very difficult, maybe impossible, to adjust for all risk factors. For example the two previously cited studies did not adjust for important risk factors like socioeconomic status or social support.

So according to these randomized controlled studies whole grains are neutral toward CHD risks. How then can we say that wheat causes CHD?

Are All Grains Created Equal?

Many randomized controlled studies compared wheat with other grains. These trials are usually quite short. So instead of looking at the number of heart attacks, short-term studies focus on risk predictors of CHD like weight gain or markers of inflammation. Apolipoprotein B (ApoB) level is another risk factor. It represents the number of LDL particles – often called “bad cholesterol”. It is now considered to be a better predictor than LDL-C – the amount of cholesterol contained in LDL particles. The lower the level of ApoB the lower is the risk of CHD.

Here are some results of these studies:

These studies show that some grains like oat improve the risk factors of CHD compared to wheat. In addition, these studies often show an absolute improvement of the CHD risk profile in groups eating oat and an absolute deterioration in groups eating wheat. Although we cannot say for sure, it would suggest that oat is protective against CHD – which is confirmed by other studies – while wheat increase the risk of CHD.

That could help explain why people eating more whole grains are healthier in observational studies since it looks like that they eat more grains like rice and oat and less typically wheat-made food like white bread, pasta and doughnuts: 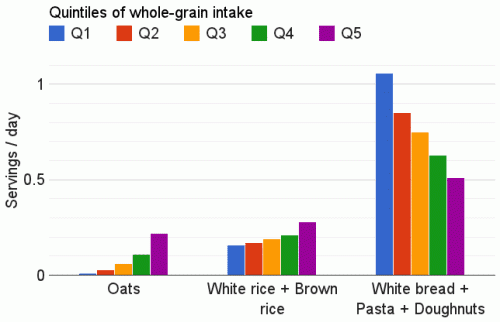 Data from Andersson A. et al., Intakes of whole grains, bran, and germ and the risk of coronary heart disease in men, 2007

Now let’s have a look at studies linking wheat and CHD. 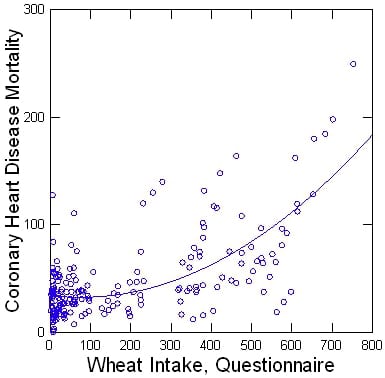 But this is just a single unadjusted correlation and does not prove much. However author Denise Minger thoroughly analysed the data of this study and found that the association held strongly after multivariate analysis with any other variable available like latitude, BMI, smoking habits, fish consumption, etc.

Since it is an observational study it cannot prove anything but it is yet more evidence suggesting that wheat consumption causes CHD. Let’s now have a look at randomized controlled trials.

In addition to the previous randomized controlled trials comparing wheat with other grains there are two additional studies suggesting that wheat consumption causes CHD.

The first one is a study involving rabbits. While studies involving animals are not always relevant to humans – especially studies with herbivore animals like rabbit – the results of this study are quite interesting.

The researchers fed rabbits an atherogenesis diet (i.e. promoting formation of fatty masses in arterial walls) with a supplement of cottonseed oil, hydrogenated cottonseed oil, wheat germ or sucrose. And as they concluded:

Severity of atherosclerosis after 5 months was greatest on the wheat germ-supplemented diet, whereas there were no differences among the other three groups.

The second study is the Diet And Reinfarction Trial (DART). In this 2-year randomized controlled trial, people who already had recovered from a heart attack were split into groups receiving various advice. The main result of this study was that the group advised to eat fatty fish had a reduction in mortality from CHD.

One other piece of advice – the fibre advice – was:

Seeing this advice we can guess that most of cereal fibres intake by this group was from wheat although we cannot be sure.

This advice resulted on a 22% death increase: 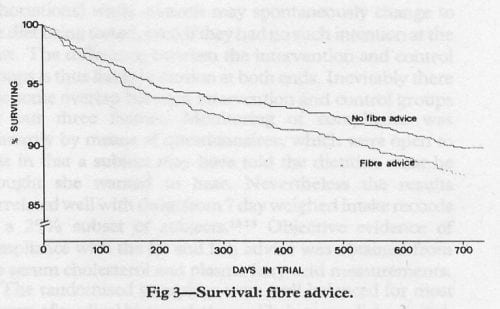 However this result bordered on statistical significance: the 95% confidence interval being 0.99–1.65.

Since the probability that the fibre advice resulted in a protective or neutral effect was a little too high, this result has been quite overlooked. Had the study lasted a little longer, it would have raised way more suspicion toward whole grains.

A decade later, in a follow-up study researchers sent self-completion questionnaires to the survivors. This study is less interesting since it had many limitations:

There are a number of limitations to the dietary data collected in this survey. The dietary advice stopped after 2 y and all the surviving men received a letter encouraging them to eat more fatty fish and it is possible that this resulted in immediate dietary changes. The dietary data presented here were collected from at least 85% of survivors some years after the end of the 2 y of dietary advice when around half of the original participants had died. Diet was assessed with a limited number of questions that focused on fish and fibre intake. Questionnaire data were not collected on other aspects of current diet and objective biological measures of fish intake were not obtained. It is thus possible that we were unable to detect important differences in diet.

However, in this study the researchers reanalyzed the original data from the DART study and adjusted for pre-existing conditions and medication use. This time they found the fibre advice to be statistically significant: as we can see in the table 4 they found a hazard ratio of 1.35 (95% CI 1.02, 1.80) for the 2-year period of the randomized controlled trial.

These results are quite telling: according to these researchers, a 2 year randomized controlled trial showed that advising people recovering from a heart attack to eat at least six slices of wholemeal bread per day resulted in a statistically significant 35% percent chance increase of CHD compared to people not receiving this advice.

Many studies found that vitamin D deficiency is associated with CHD.

As this study concludes:

A lower vitamin D status was possibly associated with higher risk of cardiovascular disease. As a whole, trials showed no statistically significant effect of vitamin D supplementation on cardiometabolic outcomes.

Of course this is not the only explanation. For example the DART study shows that fish consumption prevents CHD and fish is a food rich in vitamin D.

Not the Perfect Culprit

To be clear, if it seems likely that wheat consumption is a risk factor of CHD it is not the only one nor the primary one. There are many other factors like smoking, hypertension, lack of exercise or stress. Even among dietary factors wheat is probably not the main one. For example the DART study shows that the protective effect of fish intake is stronger than the adverse effect of wheat.

In addition, deleterious wheat effects might not affect everybody. One study showed that the ApoB level variation following wheat and oat bran intake was different depending on the genotype of the individuals. In another study whole-wheat intake worsened the lipid profile only in people having a specific genotype compared to refined wheat.

How the wheat is cooked may have a role too. Studies show that sourdough bread improves mineral bioavailability (such as magnesium, iron, and zinc) compared to yeast bread or uncooked whole-wheat. Also content in proteins with potential adverse consequences like gluten or wheat germ agglutinin differs depending of the food type.

There is strong evidences that wheat consumption is a risk factor for CHD. People at risk of CHD should avoid wheat as should those trying to lose weight. In all cases, stopping wheat consumption for a month for example to see how one feels without wheat is always a good idea since there is currently no available method to diagnose non-celiac wheat sensitivities and that even for celiac disease the average delay in diagnostic is 11 years in the US.

More studies looking at the links between wheat and CHD are urgently needed since CHD is the leading cause of deaths while wheat is the second most widely consumed food and whole-wheat is often advised to lower risk of CHD. Studies considering grains as a whole are bound to give inconsistent results since different grains seem to have opposite effects in the case of CHD. So as much as possible future studies should treat grains separately and consider things like type of wheat products and genetic variability.

Hello, I’m Alexandre Cesaro, a French IT engineer. So even though I have a great interest in nutrition, I have not done any medical studies nor do I own any health degree. So I could be wrong on many points of this article. I could also have cherry-picked studies, missed contradictory studies, etc.

That is why I created this. I would be glad to receive contributions and comments from anyone to improve this article by adding other relevant studies, removing poor studies I may have included, fixing grammatical errors (English is not my mother tongue) or even by proving everything here is wrong.