How Eating Heaps of Safe Starches Cured My “Diabetes”

I’m almost reluctant to post this because I get a perverse pleasure out of seeing myself diagnosed as an “obese diabetic,” in caps, on the Internet. Both are lies, of course. Eventually, all will be revealed but for now, let’s dispense with the “diabetes” claim.

As background, I was occasionally getting high morning fasting BG reading going back to 2008, though my fasting BG tests performed by my provider have never been higher than the 90s, right up to 2011, the last one done. A1c also has been between 4.5 and 5.0, also going as far back as they go, right up to 2011. My strips went out of date probably around that time, never got them replaced.

I got a new meter and some test strips some months back and became a bit alarmed. Fasting BG was always above 100, usually above 110, and every now & then in the 120’s. One and two hour postprandials were often high as well—depending on the kind and size of the meal, of course. The highest I ever measured (though I can’t recall the meal) was 194 on May 8, 2013, just about the time I began to ingest Potato Starch and Plantain Flour. But, just like with a lot of very low carbers, I was seeing some improvement from all the resistant starch supplementation in terms of improved BG, but not nearly as much as I’d hoped for. Call it maybe a 20 pt improvement on average post meal, maybe 10 on average fasting.

At the same time, the stuff Tim was posting in comments about his BG history sounded even worse than what I was experiencing, at its worst, yet he was posting outstanding BG results, with meter pics. Hmm. The final clue came with this post: Resistant Starch Ingestion Has No Effect on Ketosis But Blood Glucose Blunting Effects are Highest in A Normal Diet.

So, I need more carbs, specifically starches in the form of legumes, rice, and potatoes, ideally cooked and cooled, which ups the levels of resistant starch. But I was just so damn used to eating pretty low carb on average. I just wasn’t used to eating these foods daily. So, what happens? When I did eat them I’d get alarming BG readings. I liken it to a couch potato who knows he should exercise by, say, climbing a lot of stairs every day. But instead, he still takes the elevator most of the time. Every now and then, he forces himself to take the stairs and of course, gets a heart rate of 220.

This then reenforces his reluctance to take the stairs. This is what happens to many very low carbers. They have physiological insulin resistance in order to ensure glucose is available for vital functions like the brain. So, what happens when they eat a starchy meal any normal person with a well-exercised metabolism handles with no problem? They have an abnormally high response, reenforcing their belief that they can’t handle starch and that if they eat it, they’ll become diabetic. Similarly for diabetics. Why not simply eat a normal amount of starch and be your own pancreas?

How and why insulin has become so ridiculously demonized, I have no idea. The poor stepchild of all hormones, I guess.

Alright, so a little over a month ago I did three things at the same time:

I began testing again a few days back (did cheat a time or three and tested during that month), and here’s what I got: Sunday Starchy Breakfast: Beans, Potatoes, Eggs and a Side of Insulin Sensitivity. In addition, fasting was now usually in the 90s and when over 100, just slightly. This was so encouraging that I began to eat more and more starch, more and more often; doubling, sometimes tripling the amount.

So let’s take a look at a few of the meals and readings. 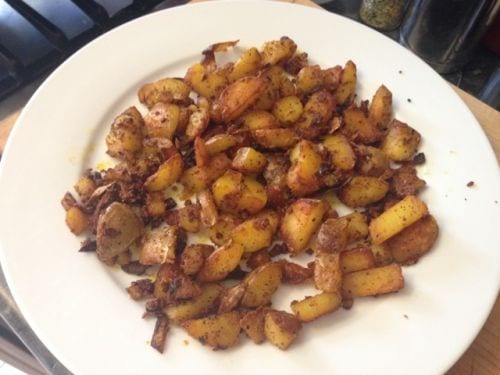 Those were leftovers from the corned beef & cabbage, cooled overnight, diced and wok fried in my favorite Juka’s 100% Organic Red Palm Oil from Africa. 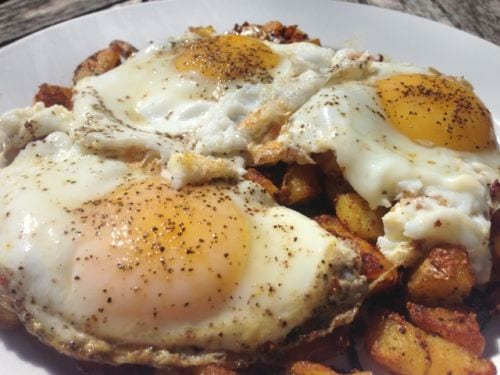 With Three Sunnys on Top 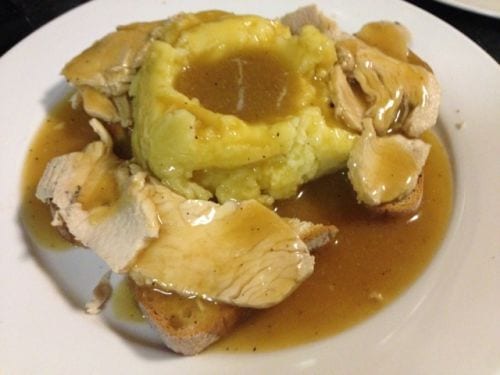 Ha, the turkey was some TJ’s roasted I had bought, along with Swiss cheese and the fixin’s, in order to make classic turkey & Swiss sandwiches. Utterly tasteless, so I soaked the turkey in chicken stock overnight, then strained it, added more stock, reduced it and thickened with potato starch. Of course, no RS value. The Yukons have sane amounts of butter and half & half. That was actually Bea’s plate, as mine was less photogenic, having even more. I actually didn’t take a reading here (just checked my meter to make sure, since it saves a history).

That’s the first time under 90 that I recall in years and years.

Unfortunately, I didn’t get a picture of this morning’s breakfast, but it was two full cups of refried beans (in leaf lard) with a slice of Swiss melted on top, 2 eggs o/e in grassfed butter, and two thick slices of beefsteak tomato with lot’s of sea salt and finely ground black pepper. The carb count is 75 whopping grams!

So, if you’ll pardon me, I think I have this puppy figured out, and you zealots are right: IT’S THE CARBS!!!!!!!!! Yep, I wasn’t getting enough of them, particularly in the form of cooked & cooled (reheated if you want) safe starches.

One final note is that I also have not taken any supplemental resistant starch (potato starch, plantain flour, or banana flour) in about 3 days. After that hot turkey sandwich, I fasted for 39 hours.

Be careful out there. Be skeptical of low-carb and ketogenic diet zealots. In time, I’ll speak to the “obesity.” You can probably guess, though.