The Great Paleo and Primal Books I Like Roundup

I simply don’t have time to do substantial book reviews, anymore. Just impossible. On the other hand, there are a number of books that come out—amongst the many I receive—that bear mention and recommendation. So, I have decided to periodically mention those that meet my standards as well as point to other substantial reviews by others when I can.

Before I get started, I really have to give a word of thanks to all those hitting the Amazon link when they go shopping. It’s been phenomenal, very much appreciated, and as such, this blog has officially entered the realm of “small business,” rather than merely a hobby. Accordingly, I’m going to have to be more careful about how I work, just like in any business I’m involved in. Contrary to erroneous claims, this blog has never made a dime over hosting and developer costs—and especially when factoring in the few speaking deals at my own expense.

You’ll also notice to the right that I’ve added links to various other Amazon sites around the world (CA, UK, DE, FR, ES, IT). We’ll see if that’s worth the space. I’ve done away with all the affiliate stuff for info products. Not worth the space they take, especially on my conscience. In short, Amazon works for me because people are just buying what they want to buy, from a company they trust. It’s not “buy this eBook bundle for $49, a $5 million dollar value!!!” Sorry if that ruffles any feathers, but the whole thing is just silly on a number of levels and I hate it. And yes, I participated in one with my own eBook in it. It made $1,600 via my own promotions, which I split with my publisher 50/50. I declined to participate or promote it when it came around this year, with my best wishes for their success. Not my bag. Tried it. Hated it.

Here’s an honest eBook Bundle pitch that’ll go over like a lead balloon: “Hey, of these 30 titles, there’s probably 3, 4, maybe more you might be seriously interested in. At $49, you’ll save some money.”

…I’m also testing something out here. If all goes as it’s supposed to, there’s code associated with the book image and text links that looks at your IP address and should take you to your appropriate worldwide Amazon site and product page, if available. While I’m sure not all of these books are available on all those sites, what I’m most interested in is if you get to the site you expect to be on when you click the image. Feedback in comments will be most appreciated. And thanks again.

MY TOP PICKS OF NEW ARRIVALS

Death by Food Pyramid: How Shoddy Science, Sketchy Politics and Shady Special Interests Have Ruined Our Health. Naturally, Denise Minger’s book has to be the top of the top, if you remember this and this. I recall when she meekly emailed me that early July, 2010, asking if I might help her promote her takedown of Campbell’s The China Study. I clicked over to her post, and I’m like, No. Way! Rest is history. Eventually, she became famous, and now, she’s made a book. It’s so very cool, and just what you’d expect from Miss Sassy Pants. For a thorough review, Dr. Mike Eades is the go-to on this one.

Your Personal paleo Code: The 3-Step Plan to Lose Weight, Reverse Disease, and Stay Fit and Healthy for Life. Chris Kresser has been around for a long time, now, is well respected, and very careful. He’s so successful helping actual patients in a clinical setting that he tells me his practice has been closed to new clients for the last two years and the waiting list is 300. He’s even hiring to help him help more people. So, when you see criticism of his credentials or his book, just keep that in mind. Since I’m not seeing tons of advertising, I’m thinking there’s a lot of mouth wording going on. He even thinks legumes are fine if they work for you personally. See Dr. Jeffrey Gerber’s review here.

The Wahls Protocol: How I Beat Progressive MS Using paleo Principles and Functional Medicine. Dr. Terry Wahls blasted onto the scene in 2011 with her TEDx presentation (you’ll note that your authorities have now flagged the video as outside of “curatorial” guidelines; whatever, you have your own brain). That got her invited to speak at the Ancestral Health Symposium 2011 at Harvard, and guess who Richard Nikoley got to speak opposite of, in the next room. A few months back, I was pleased to interview Dr. Wahls for this blog and what’s perhaps unique about it is that I asked her permission to discuss her partner lifestyle choice, and her son Zach Wahls who went viral with his speech before the Iowa State Legislature. Here’s a more substantive book review on some of the specifics. I also have a post by Dr. Wahls that’ll be up in a week or two.

Sexy by Nature: The Whole Foods Solution to Radiant Health, Life-Long Sex Appeal, and Soaring Confidence. Stephani Ruper emailed me in around 2010, I think. Paraphrasing: “Richard, I read your blog, am trying to start one of my own, getting nowhere. Can you help?” I looked at it and liked the sassy but philosophical bent right away. So I linked her up a few times. For a while, she was trying to out-f-bomb me, which was…touching. In the end, she dumped it, moved, and took up further studies. I thought she was gone. Nope. She came back with a ferocious vengeance aimed at women in particular and, in spite of the cool chicks admonishing her to denounce me before she would be allowed to play in their sandbox, she never has. In fact, she went one further and did a post for me. Womyn: hear me on this. You should just read the TOC, you’ll be hooked. Section 4: “Libido: Be ravenous,” Pg. 266. Section 5: “Self Love,” Pg. 284. You get the idea. Cornucopia of things women care about specifically in the context of a Paleoish diet. I got a very wonderful personal letter from her in addition to the publisher stock.

The South Asian Health Solution: A culturally tailored guide to lose fat, increase energy and avoid disease. This is really something. Just out today, published by Sisson. This is so very essential. Suffice to say, we have lots of dear Indian friends. In Marla & Zahid’s family, my wife had 3 of their 4 boys in her 5th grade elementary school class. We attend all of their parties and they, ours. At the last one just a couple of months ago I asked Mita, a mutual friend, once I’d seen her: “Where’s Sribash?” “He’s in India.” “Get him on the phone!” And so I got to have my usual conversation with him, as I always look forward to at such gatherings. I see so many Indians rather unhealthy looking and feeling. But given the age of the culture, I shy away from talking about it with them too much. I’m hoping Dr. Ronesh Sinha can do some real good here, for people I care so deeply about.

paleo Comfort Foods: Homestyle Cooking for a Gluten-Free Kitchen. The thing about Julie and Charles Mayfield is that they already did a solid book and decided for the 2nd one, to go with a different publisher. I’ll leave it at that. I like their work, and I like that they wish to get paid what they’re worth. I’ll leave it at that. The book is in beautiful color and delectable. I like the very first sentence of Chapter 1: “The interesting thing here to us is that if you poll ten people who profess to follow a paleo lifestyle, chances are you’ll get ten different answers as to what the definition of paleo is.” Now, that might bother bloggers with a dozen readers, but I embrace it. What have I always said? “Equator to arctic, sea level to 16,000 feet.” Imagine if you could interview those migrating folks 20,000+ years ago. You might get an earful about the stupid dietary practices of others, elsewhere. paleo is a template.

Beyond Bacon: paleo Recipes that Respect the Whole Hog. This is the most beautiful book of the entire bunch. Hardcover, so well designed. A collector’s piece, really. When I first laid my hands on it, and browsed, it was immediately reminiscent of one of the true classics: The River Cottage Meat Book, by Hugh Fearnley-Whittingstall. I’m so happy for Stacy and Matthew. When I did the 2-part interview with them here and here, about not only their personal journey but those of their children, I had no idea they had designs on contributing themselves to the wilderness. But because the changes they saw in their children on real food were so profound, their first entry was for the kids: Eat Like a Dinosaur: Recipe & Guidebook for Gluten-free Kids. Now, they’ve outdone themselves.

The Ancestral Table: Traditional Recipes for a paleo Lifestyle. Did Russ Crandall come out of nowhere? I’d never heard of him. He has a blog, The Domestic Man. When he emailed me and asked I take a look, there was a singular message he wanted to get across to me and it’s why I saved his book for last.

So, this is not going to be a one paragraph entry. To my knowledge, this is the very fist cookbook making any reference to paleo, that doesn’t genuflect, kowtow, and get on its knees to pay homage to the ignorance of low-carb paleo, as though there’s nothing else. Beginning in Chapter 4, Starches, here are the recipes over the next 30 pages.

Accordingly, from here out, last mention I ever give to a Paleoish cookbook that doesn’t have recipes for common starches.

By the way? Fittingly, the forward to the cookbook is by Paul Jaminet, PhD; or, by one ground breaker, for another. Paul, of course, is the safe starch pioneer in our Ancestral/Paleo circles, making it harder by the day for strict low carb enthusiasts to breathe. He blogs at Perfect Health Diet, and he and Shou-Ching, PhD as well, are co-authors of Perfect Health Diet: Regain Health and Lose Weight by Eating the Way You Were Meant to Eat.

“We have no demands to present to you, no terms to bargain about, no compromise to reach. You have nothing to offer us. We do not need you.” — John Galt (Atlas Srugged, by Ayn Rand) 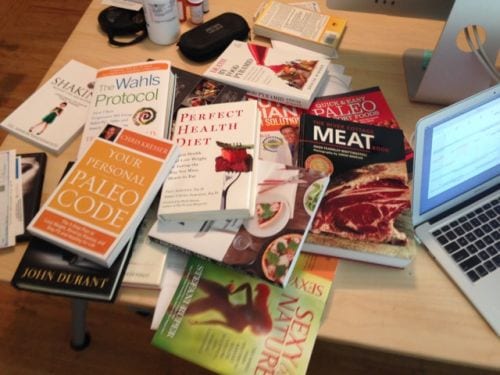 What a Lovely Mess

Update: Well, it’s been pointed out to me that I have in fact heard of Russ Crandall. He actually did a very good post for me just about 2 years ago. Check it out. Good read, and you’ll understand why he broke new ground here. My apologies to Russ for not remembering.