Quite a week, but haven’t put up a post in a few days, wanting to keep my last on Probiotics as the genetic link behind obesity at the top.

It’s been fun. Lots of comments, lots and lots of relinking and sharing going on. It kinda makes a little sense, doesn’t it? I always find it amusing that people always seem to have the need to pick a side and in one ways or another ways, find teh ways and means to demonize those taking a side designed to be diametrically opposed. I’m guilty too; but when at my best, I always ask myself the question: in what ways are they both right? Unless you take the position that half the people on any issue are abject morons and the other half, brilliant enlightened geniuses, then I’m thinking integration and synthesis is the better approach—that is, if you’re really looking for resolution…and some are not: follow the money.

To recap, it’s a simple—and I would contend—rather obvious idea where on the one hand, people claim obesity is genetic and for the other crowd, behavioral. It’s both, and the key to both is your gut biome with more genes by a factor of 100+, everybody is a snowflake, and the dugs do a whole lot of stuff via the brain-gut connection, not to mention hormonal regulation. ….OK, lets dump some stuff.

~ Tom Naughton is among the most well respected guys in LC and paleo, and for a good reason. He has a functioning brain. If you’ve never watched the Fat Head documentary, you’re missing out and you don’t get the italicized reference. Tom got interested in resistant starch. He’s tried it. He was also just on Jimmy Moore’s 100th episode of his Low-Carb Conversations with Friends. Tom spoke exclusively about resistant starch the whole 10 minute segment, beginning at 1 hour and 27 minutes into the program. Go give a listen, hear what Tom has to say, what Jimmy thinks, and what Jimmy might be trying after his book project is done. (Easiest way to be able to advance to the spot is download the Mp3 and open it your own player.)

~ Are the Bacteria in Our Intestines Involved in Mechanisms Underlying Health and Lifespan?

How can we get butyrate into our diet? Although butter contains small amounts of butyrate, a butter-rich diet has been shown to be obesogenic (Hariri et al. 2010). Fortunately, there is another way we can increase levels of butyrate, and that’s by stimulating our intestinal bacteria to produce it! The most abundant butyrate-producing gut bacterial species are Faecalibacterium prausnitzii, Eubacterium rectale, Eubacterium hallii and Anaerostipes hadrus (Tap et al. 2009, Walker et al. 2011).

Uh: “stimulating our intestinal bacteria to produce it” means resistant starch ingestion, among other soluble fibers, as well as ensuring you have the producers.

We tested the hypothesis that an altered community of gut microbes is associated with risk of colorectal cancer (CRC) in a study of 47 CRC case subjects and 94 control subjects. […] All statistical tests were two-sided. From 794217 16S rRNA gene sequences, we found that CRC case subjects had decreased overall microbial community diversity (P = .02). In taxonomy-based analyses, lower relative abundance of Clostridia (68.6% vs 77.8%) and increased carriage of Fusobacterium (multivariable odds ratio [OR] = 4.11; 95% confidence interval [CI] = 1.62 to 10.47) and Porphyromonas (OR = 5.17; 95% CI = 1.75 to 15.25) were found in case subjects compared with control subjects. Because of the potentially modifiable nature of the gut bacteria, our findings may have implications for CRC prevention. [emphasis added]

Here’s a livescience article about it: Colon Cancer Linked to Low Diversity of Gut Bacteria.

But he also cautioned that much more research needs to be done before promoting changes in gut bacteria as a prevention strategy for the disease.

Shut the fuck up, Volker Mai, you stupid fool; and shove your full employment scheme right up your ass via enema. Let’s see what that does to your colonic gut flora, you miserable fucking pig who would rather see people die all while you get your grant applications in. Grant Whore.

Dr. Jose Carlos Souto, MD from Brazil, is interested in resistant starch. He’s written a part 1 blog post about it. It’s in Portuguese, but here’s a paragraph from Google Translate:

Richard Nikoley is author of a (controversial) blog called freetheanimal.com. There should be 50 posts on resistant starch there, and an extensive literature review (see here and here). There is no way to be more complete than that. So let these unique for those who wish to go deep links, and I will try to simplify the issue in the following paragraphs.

Ha. I always love it when I’m acknowledged for being controversial. How boing would life be otherwise?

~ The United States has More People in Jail than High School Teachers and Engineers.

Yep, “Land of the Free” is the biggest joke on earth. 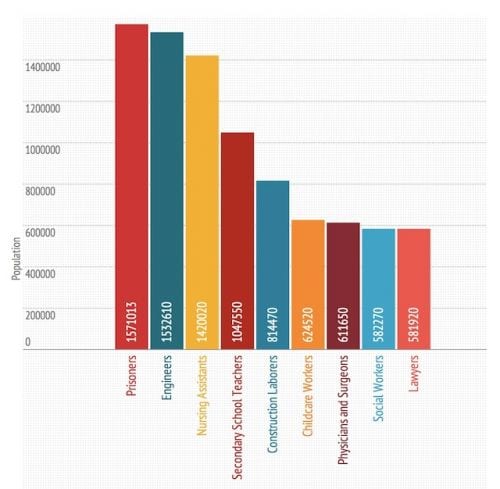 Land of the Free

In other news, at 716 per 100,000 people in prison, the “Land of the Free” imprisons more of its population than any other country on earth. Yea, flag waving, cop-asshole licking Republicans, tell me all about the quality of statistics and reporting. I’m waiting.

This situation is 100% on the doorstep of Republicans. Yes, Democrats do it too, such as young stoner Obama. But he’s was trying to win a second term, and now trying to ensure he’s succeeded by another party Democrat. That requires being political in ways that worthless fuck Republicans created.

Say what you will. I’d rather be a fully socialist state than have so many lives and families destroyed by fucking Republicans.

~ Watching the Oscars? I am. I liked a decent number of films this year: American Hustle, Dallas Buyer’s Club, Wolf of Wall Street, Gravity….among others. I really want to see Matthew McConaughey get something out of that DBC performance, reminiscent of Tom Hanks in the wonderful Philadelphia.

Anyway, still waiting to see Ricky Gervais host it. Here’s his Golden Globes hosting performance clips over three years to to get you warmed up. I like Ellen a lot. We’ll see what she has up her sleeve.

Alright. Wrapped for this time. Be careful out there.