Now That the Self Flagellation Over Dumb Memorials is Over, May I Have Your Attention?

Does anyone actually think for themselves, anymore, in the “Land of the Free?” Or… 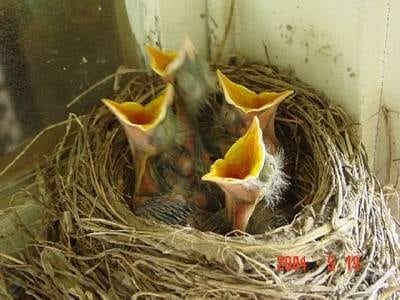 That’s how I largely view America, now, especially including stupid-shit-flag-waving, nationalist displays like Memorial Day. That capital—earned in WWI and WWII—against no-shit geopolitical crises, was spent a long time ago and people ignorant of history are just pretending like they know something when all they’re doing is (see above photo).

I’ll get to how I took in a long weekend in a bit; but first, let me just toss some random out there. First, I quickly contrived this post, virtue of my brother Stacy. He works for an oil drilling machinery company out of Houston and spends about 300 days per year on the road, worldwide, away from his family. He commented on an article about the broke and indentured IRS looking to tax frequent traveler miles—kinda like being so hard up for pennies, they go after cafe waitresses for tips. In The Great Land of the Free.

At $.025 per mile it would have meant more than $5,000 in extra taxes for me last year. While earning those miles I was earning a paycheck, which I paid an absurd amount of taxes on.

Sometimes I really feel like burning my passport and moving to a country that is actually free. Or even a country that isn’t, but doesn’t claim to be and doesn’t try to brainwash the sheeple that they live in the “Land of the Free.”

I’m not often inspired by my family—which I hate that it’s so, but is what is—but this was so up my personal alley. It prompted a reply.

Congrats my brother. You have seen what I saw in the 80s. Freer countries. I didn’t just pull my schtick out of my ass. I saw actually free countries, where people live lives in peace, free from the state.

So, waddya think? Money grab from a dying, pathetic republic?

I want to see tens of millions of Americans in soup lines. I do. I admired my grandparents, who grew up through the Great Depression. By comparison…never mind. There isn’t one. I see baseless entitlement everywhere. Like my brother, I want to leave. I want to film myself burning my passport. I want to die not an American, to salvage some of my pride. And go hubris early!

There’s this. It was a righteous rant comment by Bret on a post where I went off on worthless Republicans and Conservatives, worse than commies since 2000.

Conservatives, and in particular Republicans and their voters, are the single greatest threat to our nation’s current and future well-being, in just about every measurable way.

While Democrats and their ilk are honest in their desire to swallow up nearly all of America’s freedom and economic livelihood with endless government and thereby repeat the patently stupid mistakes of the Soviets, Republicans go out and preach free markets and limited government, while in practice delivering crony capitalism and equally (to the Democrats’) big government. And oh, by the way, they also display an impressive penchant for invading countries and replacing their governments (calling these enterprises “wars,” contrary to what the military would tell you), and staying for 10 years despite constant, overwhelming failure. Hell of a party.

Eight years of the likes of George W. Bush and his contemporary Republican congresses give dick heads like Bill Maher and Michael Moore the opportunity to brainwash more people into hating capitalism. “You see?? These are the consequences of capitalism!” The damaging consequences (what symptoms are legitimate damage, that is) did not happen due to capitalism, of course, but due to the corruption, corporatism, and other aforementioned big government douchebaggery. But that is not the message that many citizens take away from the conversation. The less than basically economically erudite among us (which I often feel is, sadly, most of us) end up concluding that, yes, capitalism does produce income inequality, concentrated economic power in the hands of a few, and so on. ‘Let’s leave that back in the 20th century where it belongs and embrace socialism!’

The only Republican presidential candidate with a shred of integrity for the last 25 years, the great Dr. Ron Paul, was cheated out of his opportunity to win the nomination once the party leaders saw that he stood a credible chance. Filthy, stinking, rotten, corrupt, Democrat-in-disguise PIECES…OF…SHIT.

And yet almost all self-identified conservatives I ever talk to defend their beloved Republicans vehemently (and hate Obama on a deep, intense personal level), the way John McDougall defends veganism in spite of all the evidence and loathes those rotten lying carb watchers.

The current batch of Republicans can roast in hell, save for Justin Amash and Rand Paul. I would rather tolerate an unstoppable 50-year streak of Democrats than see another non-libertarian Republican-controlled Congress or White House.

And you might want to change the last comment in your blog post from “2014″ to “2002.” That’s when Bush’s idiocy really started to bludgeon America (and the world) upside the head.

While I think Ron Paul would have done better to keep with honest work delivering babies, I get it.

Think of it this way: the greatest weapon of communism and lefty socialism these many decades has been the far worse Republicans and conservatives. They are the true whores, top to bottom and wall to wall. They are whoring pragmatists fighting principleists. It makes sense, since all Republican principles are bound up in Mother Goose Sky God fantasies and Founding Mother Gooses who owned slaves. Republicans and conservatives are fucktards. Leave them. They’re the ones ushering in commieism in their lust for power and desire to make sure your life is as paternally dominated and miserable as theirs. Most loathsome people on earth. Never vote for them. Only laf at them. If you’re going to vote, vote hard commie, get it over with. Reality always wins. Soup lines are your eventual salvation, not Republicans or conservatives. Go commie. They’re better, pragmatically.

…I left my gig as a Navy officer in 1992. The Wall came down, and I saw the writing on the wall. It became all about budgets and justifying an existence I had not studied for. I knew everything about every Soviet weapons system that could kill ships at sea that existed, and knew how best to counter-measure with our own systems. There were dozens of them, launched from sea and air. The Soviets had my deep respect in warrior terms. 14th Century dirt scratching savages, who at best can manage and IED or suicide bombing? Never. They are best ignored and lafed at, in my opinion, and you just take your chances. As is stands, about 3,000 got killed in 9/11 and we’ve since killed better than 2 million, many innocents, many daddies and mommies—and kids and children and infants. Shameful. And yet, America is the quintessential flag waving, proud republic. 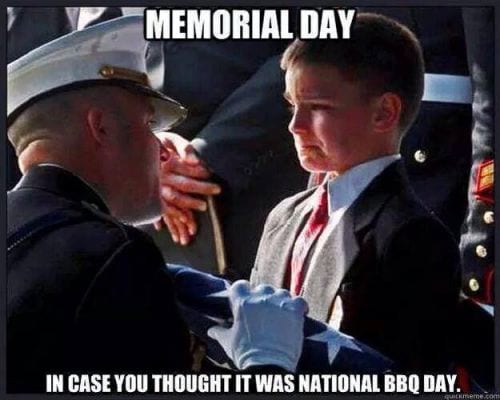 You know what? I hope that in a decade’s time or so, he does not succumb to your brainwashing and instead, points a high middle finger at you in righteous hatred. He wanted his dad, or his mom, and probably doesn’t give a shit about how coiffed the American flag is that’s handed to him. Hopefully, he understands that Republicans love Mother Goose Fairy Tales, and will kill people all over the world and sustain thousands of casualties at home—depriving kids of fathers and mothers—so that they can live in comfort that their fantasy is stronger that the fantasy of others.

And then do a BBQ and/or, go camping.

Nothing to memorialize. So, you go right on ahead and comfort the devastated 4-6 year old son or daughter—or whatever age (ought it matter?). Tell them what a hero their daddy or mommy was on this one single fucking day of the year where you pat yourselves on the back for being all fucking thoughtful. Fuck you and your transparency. Go fuck yourselves, America. 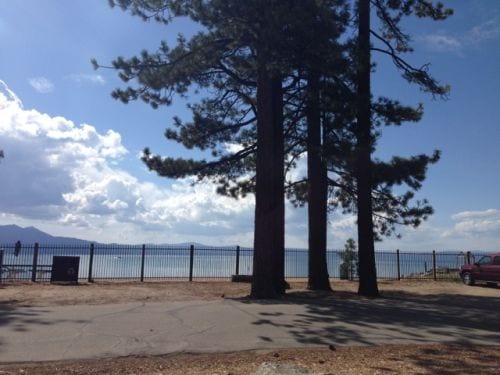 View of Lake Tahoe From Our Room 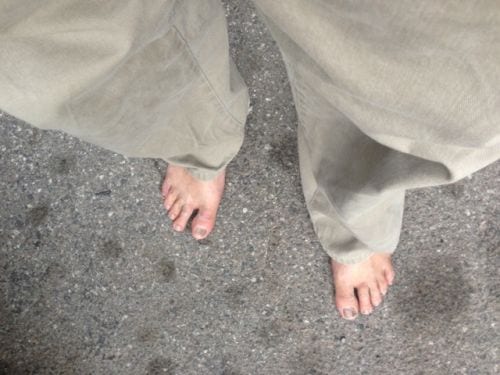 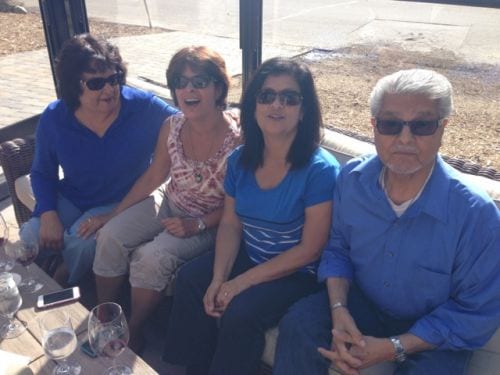 That’s Sam Fabela with his three girls (3 sons absent). Anita, Beatrice, and Susan. My wife didn’t get the blue-shirt memo. Sam is 85 years old, and a Type II diabetic for over 45 years, now. He’s eaten beans, tortillas, and potatoes nearly every day of his life and still does. He’s a retired air traffic controller. So, maybe controlling diabetes is not so much about carbs, but more about being smart and careful, as he has always been in the nearly 20 years I’ve known him.

Went out an had the same meal as I had the night before. 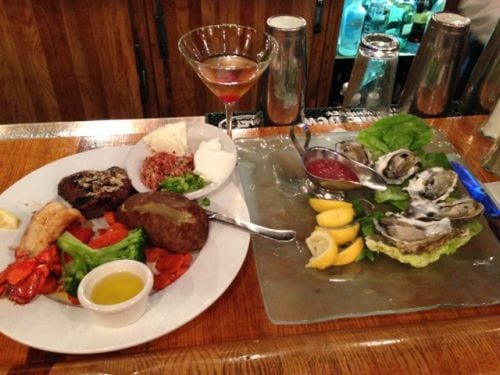 Steak, Lobster, Baked Potato, Carrots, Broccoli, and Oysters on the Half Shell with a Mignonette. Chased with a Maker’s Mark Manhattan, Perfect Style, and Stirred, of course.

I saved two oysters for J. Stanton, who met up with me as I was finishing. 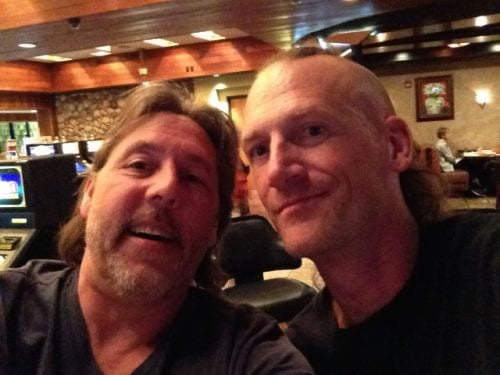 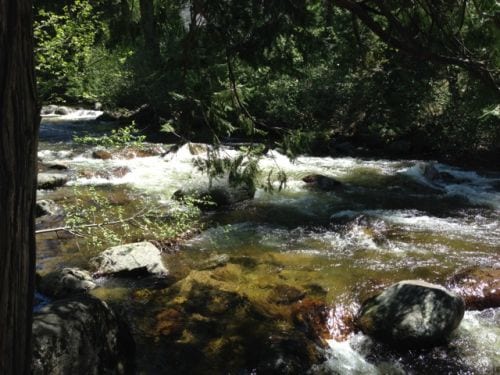 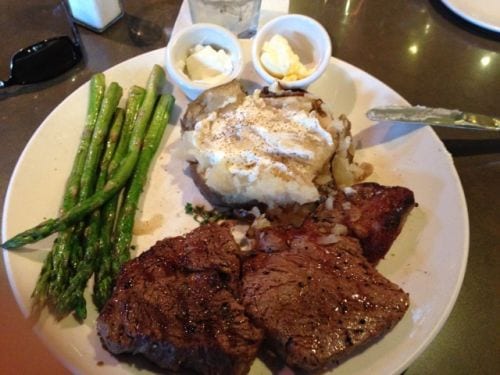 We returned home on Sunday rather than Monday, and since I’d eaten steak, lobster and oysters Friday and Saturday, I had to find a way to wean myself on Sunday. Notice how I take it easy on the butter and sour cream? You can do that. Trust me. Discover the taste and texture of a baked potato as a baked potato.

In all, not one single time did any of us do anything but enjoy a weekend. Nobody, so far as I could tell, was self flagellating over how a war lord scammed young men to die for him, and over lafable 14th Century Dirt Scratching Savages from lands where females haven’t enjoyed orgasms in over 2,000 years.

Nor did I hear anyone celebrate the plight of kids, where powers do all they can to try to make them proud for not having a mom or dad—when all they really want is a mommy, daddy, a family. Chin up, kids. We have ‘Mericuns ’round these here parts who appreciate their service, and we grill steaks once per year and say a bunch of stupid shit to make it seem worth it.

I wish I could like you celebrating Americans. But I don’t. I’m disgusted by your shameless displays. And I hate you because you will never show the shame you have earned.