Some years back, everyone following the goings on in the U.S. Low Carb community was made aware of the goings on in Sweden, surrounding the institutional trials and tribulations of Dr. Annika Dahlqvist, reminiscent of what Dr. Robert Atkins encountered in the early 1970s here. Since being vindicated, a rather substantial LC Community has burgeoned in Sweden. One of my readers and commenters is Swedish low carb blogger Per Wikholm, and I asked him to fill us in on what’s now going on in terms of that community’s awakening to the power of resistant starch.

When I first began blogging on the subject of resistant starch this January, I did suspect that the s-word wouldn’t be well received. My first post was about Steve Cooksey and his N=1 experiment with RS. Steve is a type 2 diabetic on a low carb, high fat paleo diet that includes butter and some high fat diary products. In Sweden, Steve’s diet would without any doubt be labeled as a LCHF diet rather than paleo.

That first blog post didn’t receive much attention, but a constructive discussion in a LCHF FB-group for diabetics did start. With my second post on RS in march—mainly based on Mark Sisson’s definitive guide to resistant starch—the RS issue was stirring up just like a tablespoon of raw potato starch in a glass of water. Good results on bloodsugar from diabetics who tested RS were accumulating.

But the gut microbiota really hit the fan on the 16th of April. I was just about to press the publish button for my very long, third blog post, when I got a message from Margareta Lundström, one of the founding mothers of the Swedish LCHF-movement, that she had just come out of the closet on her blog, describing her N=1 experiment with raw potato starch. The results were amazing. Her fasting bloodsugar that had been borderline prediabetic had dropped significantly. So I had to rewrite the introduction to my blogpost called “The LCHF guide to resistant starch.” For all those of you that like the classic Monty Python Dirty Hungarian Phrase Book Sketch, here it is translated by Google into English.

(Notably ”LCHF” is randomly, sometimes translated to ‘carb’ by Google so in this translation, Tom Naugton is portraid as one of America’s best-known advocates for carbs. Maybe Google in cooperation with the NSA, is clairvoiant enough to predict Tom’s upcoming postings on safe starches.)

Anyway, this time it really took off. The Diet Doctor Andreas Eenfeldt wrote about it in his Swedish blog the very same day and later also on his English blog.

Dr. Annika Dahlqvist, who was the first to introduce the concept of LCHF in Sweden, wrote about it on her blog in Swedish and is now testing RS. Since then, multiple popular blogs and forums on FB has have had really long treads were RS is discussed. Most of what I write in my LCHF guide to RS is no news for the U.S. LC and paleo audience; but I added a table to illustrate not only the total amount of resistatant starch, but also the accompanying amounts of starches that do elevate blood sugar. Admittedly, this table is a combo of data from different sources, so in a sense it is comparing apples to pears—or rather different brands of rye crisp bread.

The take home message of this table is that if you are diabetic or prediabetic, stick to raw potato starch…or maybe occasionally raw potatoes thinly sliced or grated (in moderation, there are some nasty antinutrients present in uncooked, raw potatoes). If you are more carb tolerant, fry some grated potatoes with butter, olive- or coconut oil in an small frying pan and flip it. Don´t overcook. The potato should still be be mainly raw inside. You can eat it as is or use it as a pizza crust adding tomato, cheese and whatever topping you like to it. If you put it in the fridge overnight, a fraction of the starch will retrograde and become resistant. Here’s the table: 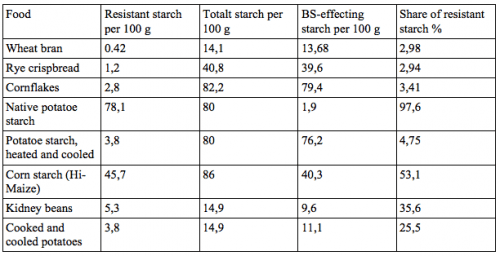 Thanks to Per for the reportage. It will be interesting to see how things go. One thing that strikes me, is that it appears there are actually LC docs in clinical practice taking a hard look over there in Sweden. Perhaps they can all leapfrog the LC docs in the U.S., who have 3-4 decades more entrenchment into the idea that they know all the answers already and there’s nothing to see here.

We’ll just see about that. …In the meantime I have this strange urge to head over to the IKEA caf for some meatballs & sauce, lingonberry jam, and mashed potatoes.