This image went up on Facebook yesterday for fun. I’ve published it here and there, before (including a slide in my AHS12 presentation at Harvard Law—got audible lafs). But there’s lots of newish readers, owing to resistant starch, who haven’t looked into my dark past (which is 10 years and 4,000 posts, all for the searching). 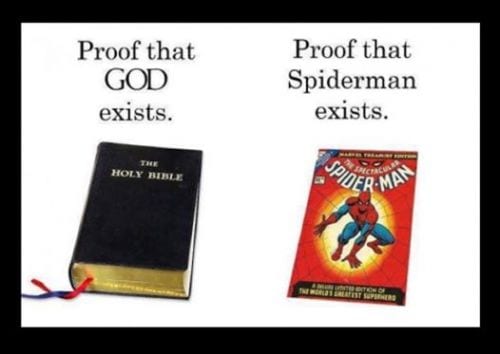 All the proof you need

By the time Leroy Wiley thought he was going to be smart, there were 7 laf comments and 24 laf Likes.

Someone just spit whatever they were sipping, onto their screen right now. Wipe it off. I’ll wait….

But really? Have average humans on the Internet—for more than a decade, now—not gotten beyond this form of lafable and utter ignorance? This is the sort of rancid shit that passed in the 1970’s, before cell phones and reality TV, when Jimmy Swaggart was “reality TV,” but not ultimately in the way he schemed.

It gets way worse than that in the comment section—never any better—in spite of various approaches I took: from ridicule to insult, to actual explanation of basic logic in a 1+1=2 kinda way (using examples and analogs). To. No. Avail. Apparently, it’s insufficient to say “I don’t believe in doG.” Rather, one must state an affirmative belief in a negative proposition: “I believe there is no doG.” Otherwise, it’s some kinda gotcha! (I understand the implicit illogical and disingenuous form of the question, which I also explained in the comments.)

You see, all these constructs are ‘just what I believe too,’ so as to discount, or equivocate, per se. Everything is just a belief, so what’s your beef? My belief in whatever is just as good as your belief in whatever. Whatever. …He kept asking for proof from me that doG doesn’t exist. Get it?

Is it just time to take up what the New Atheists began, and just ridicule mercilessly, relentlessly? I used to be big on it, people hate it; the whole deal they started seems to have died out, perhaps because those guys got notoriety, while average folks got scorn?

I see religious belief as not the bigger problem. People—readers—assume I do, or that I have some resentful chip on my shoulder (this makes it easy for them to reconcile me) but I don’t.

I see it as just a symptom of being a fucktard. Fucktards are dangerous. They are allowed—NO! admonished—to vote to control your life. I was a religious fucktard until about 28. Big huge fucktard from 11-19, then after divinity school,  just awful at being a good fucktard all of the time for the next 10 years (girls…pussy: the worst sin of all, ’cause fun)—until I lifted a middle finger (figuratively, but literal gesture) to the heavens in 1990. Never looked back.

I Love This Form of Ridicule, of The Fucktard Ridiculous:

Let me cover the ridicule (it’s tantamount to a parable; also, the dames will love Brad Roberts’ baritone voice, I predict):

Brilliant, but the most brilliant is the ridicule over how people pray to the equivalent of Mother Goose, expecting anything but a fairy tale—many already published, in new works and 2,000 year-old-ancient texts. I’m betting the newer works have more pertinent moral lessons. Four out of five fucktards prefer Mother Goose.

This is, of course, why churches with their leaders prevail. They are so skilled at relating a kid who wakes up with blue hair and gets made fun of, to any problem you might ever have. And sadly, it’s true.

As an aside, I knew the Florida AG who took her down in 2002. Met him several times at conferences around the country. I always told him he did a disservice—that people who want to voluntarily pay someone to tell them what they already know, deserve to be taken.