So I redesigned the blog, substantially.

Yep. you see ads. They are served up randomly by Google and a couple of others I’m testing out. I like them, and I’ll tell you why.

It’s that second point that’s most for me. Everybody else does affiliate shit and I won’t do any. That’s where they have a code for “paleo Brownies” or some such other “Paleo” junk food (or Low Carb Crap). They get a lot more for a sale than I get for an impression or a pay-4-click, but I’m not trying to demographic you. In fact, most ads served up are responsive to your cookies (har har); i.e., places you’ve been to and expressed some interest in. The ads you see are different from the ones others see.

I don’t give a shit whether the sweet treats you eat are “paleo” or not. This kinda dealing I will simply not abide. I’d rather see random shit served up by Google and others. I laf at my own ads.

I have long wanted to change the old banner that served me so well for so long.

Justin Owings was a long time reader from way back prior to 2008 or so when I went to this banner. Similar dumping of religion and politics background. He’s a smart man, now husband and father and last I heard, was sill in the employ of Teh Google. He designed it. About a year or so ago I asked him about another round but he doesn’t need to get $300 for a banner, anymore. Good. I’d have paid $500, but I knew better than to ask.

Among other things, he started and runs Birthday Shoes. Here’s me. And my friend Davis Straub hang gliding in Vibrams.

At times, I obsessed about doing a new banner. Once, I went to A.B. Dada, a cool cat who started and runs 7BuckTees—100% Politically Incorrect T-Shirts. He has designers and was willing to do a freebee for cross promotion. But, I was so muddled that my attempts at putting literally everything into a single banner was so silly, he stopped responding to my emails. Good.

I forgot about it all until a few weeks ago, when I realized that there’s simply no way to convey my thinking over the juxtaposition between wild human animals and caged zoo humans in a single banner. So I got to cropping pics.

Right now, there are exactly 39 banner images with many more to follow. It’s very digital. The image that serves up with each visit or reload either expresses part of my idea of a wild, natural, healthy human existence…or it expresses a caged, zoo’d, trained, made up, mak-ed-up, fake, phony, learned, over-fed, grain-fed, junk-fed, sugar-fed, drugged, dominated, subservient voting human suffering from Stockholm Syndrome—an Earth epidemic.

I never say which is which. That’s part of the fun.

Some are catching on. I initially got confusion. Then, signs that some were getting it. My favorite critique so far was this one:

Enjoy your site, but.. does this look like a blog you are proud of ..really? 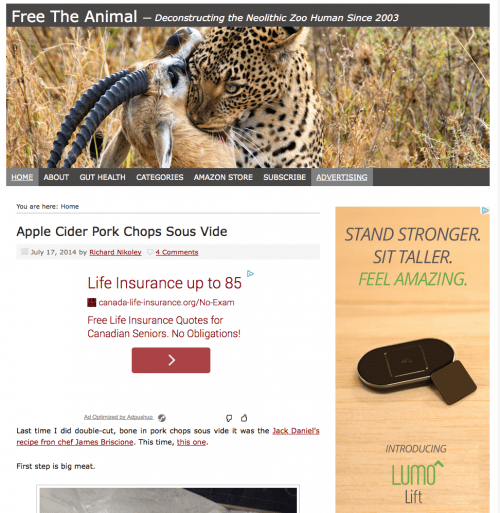 The Banner, or the Ads?

I wondered if it was the banner. The ads, I’ve explained and if anyone wishes to pay me $2,000 monthly, I’ll take them all off. Month-to-month contract.

Absolutely! That biting the throat is one of my 2-3 favorites in the roughly dozen rotating banner images I have.

Thanks for getting outraged, it’s great validation for me. Like I always say, I’m not happy unless you’re not happy. :)

Onward. Eventually, I’ll have hundreds of images juxtaposing a wild human existence with a tamed, learned, submissive one.

And everybody gets to choose which they envy the most. 1,000 words per visit.