Juxtaposition: Dallas & Melissa Hartwig vs. Nora Gedgaudas
Hit & Run: When Will We See The End Of Kings? 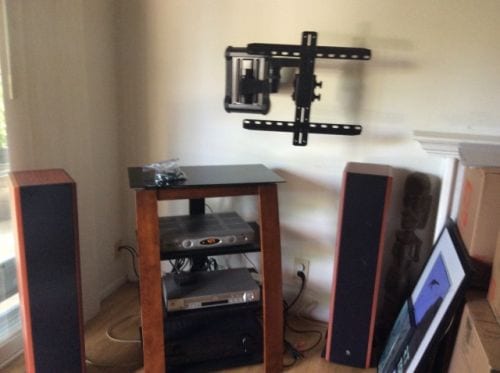 A Sony 42″ flat screen LCD HD TV used to be strapped right up there on that articulating arm. We’re moving soon, and as such, have been selling stuff via garage sale and craigslist like crazy. No, the Denon Amp and Boston Labs speakers are not for sale. Ever. I love them, and I loath all surroundsound bullshit. I like my music delivered like a concert. In front of me.

…The other day, I figured it was time to re-up for a computer after nearly 3 years—when I went to a top-of-line MacBook Air as a my sole machine. $2,100. It still drives the 27″ Apple Cinema Display I’m staring at now.

Twice the speed, twice the RAM and other stuff, and it cost me $1,500, including tax. There’s $600 less for twice as good right there. Moreover, according to the local Craigslist market, my old one can fetch about $600, still.

…My brother just had photovoltaics installed on his 3,000 sq. ft., 4-BR, 3-bath house. They’re a fraction of what they cost 20 years ago, economically viable, and you can even get them installed with zero out-of-pocket—the savings in electricity makes the payment. His June electric bill was $4.50. The A/C runs all day.

I note that in this same 3-4 years, US inflation has been a total of about 8.5%, but of course, that’s compounded annually. 10% is a decent ballpark then, so the MacBook might cost $1,350, instead. Another $150 off but instead, it goes toward monetizing U.S. National Debt.

…Speaking of which, I note that the National Debt has increased about $3 TRILLION in the same 3-year period of time. Public debt is an awesome barometer in noting just how much fucktard parents and fucktard grandparents are liars. They dote on and on about the kids; but they want their “retirement,” and by doG, those kids, grandkids, great grandkids…great, great, great, great, great, great grandkids are going to pay for it all, with interest, while they wave their flags, read every single AARP press release that ever came out, and sport “I voted” stickers. Pathetic.

Tom Brokaw was wrong. It’s not “The “Greatest Generation.” It is—literally—the most entitled feeling generation in the history of planet Earth. I’ll take the previous one, that endured the Great Depression, anytime.