Life Drain? Money Drain? Or Both?

I ought to have learned this lesson from my The-Great-Depression surviving maternal grandparents; or, from my WWII surviving paternal grandparents, who managed to immigrate penniless to the former “Land of the Free” with 6 kids; to Ellis Island, in 1952. Greyhound Bus cross country to their sponsored settlement in Reno, Nevada. Five of them still live, including my dad. He was 14 when he got to America.

If not them, then I ought to have learned this crucial lesson from my maternal great grandmother, who had my grandmother at the age of 15 in 1919—after she ran away from home. Later, she had a son who went off to a great war in the Pacific as a navy enlisted man. I have the ironwood busts he acquired in Indonesia, to the left in the photo, to show for it. The busts to the right—slightly less weighty but still dense & heavy—as well as the centerpiece—I got myself in Penang, Malaysia, in 1988. 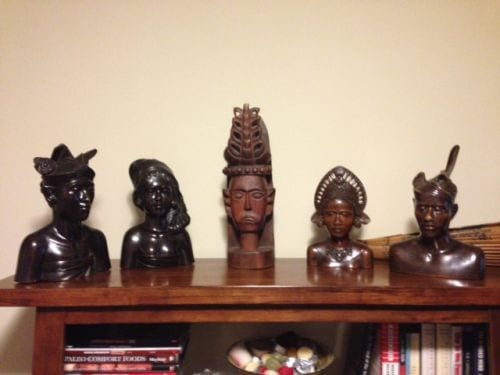 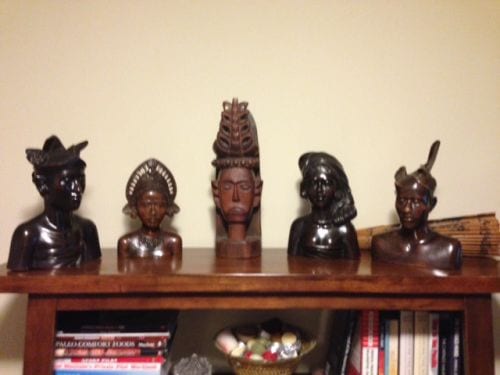 Grandnana raised two kids as a single mom during the Depression. Maxine (she had too many last names in her life for me to assign a specific one), my great grandmother, lived until I was 28 and was of sound mind until I was about 25. In my earliest youth, she was literally my favorite person in the world, and I think my mom had the wisdom to want it that way. Every trip from Reno, over Donner Pass, to see Grandnana at the San Joaquin River Club rural development south of Tracy, CA, was like a trip to a theme park (It was far greater in the 1960s than it is now: it’s a dump now).

It was a great big deal to me.

The hardships she faced in her life and overcame… Wow. That would include a head-on collision in the mid-60s, when she was 65, on the 2-lane road up to Tracy at night, in her big Dodge sedan. Nobody wearing seat belts. She lived, though she spent 6 months in a body cast in a convalescent home but years later, in her 70s, took an international, month-long trip to The Holly Land—now the Middle East Conflicted Region, in perpetuity. The six people in the VW—including an infant and a dog—all perished. They crossed the line, not her.

On my mother’s side, they always tended to know real assets from fluff. Go through the garages, and they’re filled with forged and machined tools—of personal capital value. They bought used cars, usually. Paid cash, usually. They had very little debt. The failure of State, i.e., the Depression (pawned off on “Capitalism”), motivated this. Unfortunately, they later all fell victim to the regurgitate scam: Fucking Franklin fucking Delano fucking Roosevelt. Successful scam, though. Still going strong. Snake oil that has the magical power to steal from other people to finance your values is strong medicine.

My grandfather owned a number of undeveloped properties and a few rental houses he and his brothers built. He owned all of them outright and he’d come to California in the 30s or 40s as a poor Idaho Mormon from Malad, ID, the oldest of about 13 kids. Over the decades, he financed all of his siblings to come out to California. Paid for their weddings too. He was no magnate of capitalism. He was an artist. A deer hunting, bird hunting, fly tying, fisherman artist. But his artistic, hand painted signs in and outside of all the Reno casinos in the 50s, 60s, and 70s, are what all the cheep plexiglass you see now, replace.

…I grew up at 4040 W. 4th St. in Reno, NV, now 4040 Goodsell Ln. You can Google Earth or map it. Check the satellite view. What’s notable now is that though the long greenbelt to the north, along the Truckee River that was our playground looks the same, the general housing landscape has changed from solidly rural to quasi-suburban. That house to the right of 4040 was where the classic river house my artist grandfather, Clarence Goodsell, built, stood for decades…now replaced by a Billionaire’s monstrosity encompassing even the large lot that stood between our two places and where, as a kid going to nana’s place in the dark, I had to run faster than the assuredly evil monsters behind me.

Monsters are evil and they want to eat your fresh flesh. That’s the point. Even they understand glycogen depletion.

…The last two weeks I’ve been doing exactly what I told you I’d do. Friday, about noon, I left the cabin, drove to San Jose, got stuck in debilitating, life-draining traffic at 2PM in San Jose.

Understand me. If it was not for you and the doggies, I would never ever set foot in the South Bay, ever again. Ever. Eventually, I would take pride in never coming to this shit hole.

To me, the entire thing is 99% vampire, and I feel my blood being drained by the minute. There is simply no language created yet that would allow me to express my depth of loathing for the whole fiasco without just tossing off a few fucktard-esque epithets.

All I ever care to do is have a visit now and then to a dense, urban environment: San Francisco, New York, Hong Kong, Paris. Yea, that’s it. My 4 favorite (left a ton off the list I have been to). There are a few I’d still like to see. Buenos Ares. Sao Paulo. London. Berlin. Kuala Lumpur. Santiago. Miami. Milan. Havana?

Otherwise, it’s rural and ruraler, for me.

Do you know what a pleasure it is to walk into the hardware store in Placerville, California, walk on 2×6 planks worn from over a hundred years of foot traffic, get any piece of obscure partage you might need—even if they only sell 2 units per year—vs. going to Home Depot, Lowes, or OSH (now owned by Lowes) and having only available what they sell a lot of?

So what I sit here, wondering—having done most everything, including starting a company from a bedroom and doing millions per year with dozens of employees—is what I really wanted to do. What did that 20 years of life earn me? What did it cost me? I don’t know. Would I give up the experience? Maybe no, but only because I knew no alternative (confounding variables). What if, for instance, I had set off, again? I don’t know. I’m attempting to give hindsight, as a clue to foresight.

I’m not writing this post for voters over 30. You’re already lost, have to make your own way. I write this post for high shoolers and 20 somethings.

You do not have to do what everyone admonishes. You should go with your heart. Hopefully, I touched it, if just a bit. You have the essentials. That’s all I ever want to give. Beyond that, you think for yourself and you’re on your own.