Not going to make a big deal about this because frankly, I’ve been considering dumping all Facebook for a while.

And so, I just did that. I just deleted (“deactivated” is the best you can do) my personal profile with its 30 friends (I modeled an HG society for friends. They were actually friends. I knew every single one in person) and 1100 followers who can see and comment on my public posts. I dumped the FTA Page with its 5,000 “Likes” and the Page I recently created—The Daily Fucktard—where I posted my most outrageous stuff for the 200 or so folks who like it straight up, that way.

I rant a lot on all of them, but had endeavored to engage in social segregation…such that folks who followed my personal profile got most of everything, the folks on the FTA Page got only the generally paleo related stuff (if a rant, a paleo rant) and those on TDF got me at my very worst because that’s what they want.

But Facebook, apparently, has a single set of “community standards” encompassing 1.2 billion people. It’s the India of the Internet and just as dysfunctional, socially.

…If you must know, it wasn’t about any of the cop rants I do…State…religion…anything like that I’ve ragged on hundreds of times in as many posts.

Nope, I made fun of some email I got about some “Gynecological Awareness Week.”

I found it odd that there needs to be a week for men to be “aware” of pussy. They took down the post and suspended me from doing anything but look at my three outlets for 24 hours. In other words, others could post, like, comment, whatever, and I could do none of that on my “own” outlets. So, guess who owns them?

…You can find me at this blog, and in its comments. Incidentally, I don’t do much on Twitarded anymore, either.

I own the data here (I use none of those blogging services—I pay for a vanilla server), and the community standards are my own for the small community I tend to have a handle on.

If you are disappointed, think of the bright side. I will now spend zero effort on Facebook. Moreover, think on yourself. What might you gain if you were to dump Facebook and what, by comparison, would you lose? The answer is different for everyone, and that’s the point.

In the end, Facebook costs me way more than I ever got from it, and that includes even several thousand dollars in ads over the years I’ve paid them. Time and attention are my most valuable assets. I’ve just eliminated enormous overhead.

…And so, if you want doggie pics from me, you’ll just have to check here when I decide to put them up. Here’s my two, Scout and Nuke, plus my mom & dad’s Kobe, the Shitsu; and my brother’s, Drae, a lab/pit mix who’s the world’s biggest sweetheart. 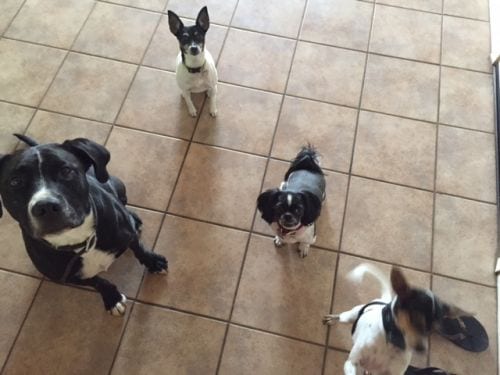