I arrived back to San Jose yesterday afternoon, after a week away giving Beatrice time off from attending to two very spoiled and ornery rat terriers (she spoiled them; see how charitable I am IRL?).

Checked email when I got back and a blog reader, Brian, had a link for me: Rice and Bean Resistant Starch Salad; a post at Food Renegade by  Shannon Stonger (wouldn’t it be cool if she was ‘Shannon Stronger’ or, ‘Shannon Stoner’?).

I looked around. Bea had a pot of pinto beans in the fridge, and the rice cooker was on the countertop, with a full load from the night before. Hmmm, beans & rice dish? I’m in. After a quick surveillance of what else there was on hand, I set off to the market.

All I needed was two large heirloom tomatoes (I got a big red and a big yellow) a big [h]ass avocado, and a block of cheddar cheese. It calls for Mexican oregano, but I had Greek, which is the closest. Substitute a little lime juice for some of the vinegar and you’ll approximate that lemon verbena thingy (I googled it on my iPhone 6, in the store).

The recipe doesn’t specify, but you want to drain the beans of their liquid. Ought be obvious, but you never know. Some people do beans more like soup, so you want to start off the same.

My only thing I’d do different next time is to go with less onion. Recipe calls for a medium, the two I had were large and I picked the smallest one. Bit more chunky raw onion than I’d have preferred. Beatrice, on the other hand, loved it more than I. Definitely go with doubling the cayenne if you at all like a little kick. Even still, it’s a small kick. 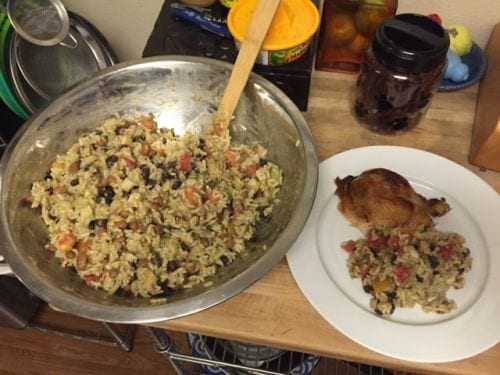 So, there you have a week’s worth of starchy, side-dish substrate for your proteins for lunch and dinner, for two people; and it’s as cheap as sewer water. 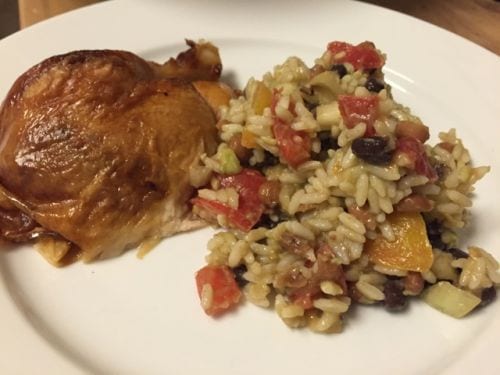 …I really loved the idea of a whole avocado for the dressing substrate (as opposed to mayonnaise, which I hate to make). Word of caution: if you go with the 2 tsp salt as I did, the dressing will be very salty. Remember, it’s to dress a lot of stuff. You’ll not need to add any more salt.

Potential future variations: Olives? How about fresh cilantro, either as garnish or in the dish itself?