I’ve heard smatterings of anecdotes over the years about folks coming down with rashes while generally LC dieting (Paleo / Primal / Plain Jane LC). Tough to pin it on anything certain until someone experiments extensively and then does the PubMed crawl. So, posting this simply to get word out, in case anyone has had this condition and was unaware that it’s pretty well associated with ketosis, chronic fasting, etc.

Via BJJ Caveman. See his post for a substantial comment thread as well as the links to all the studies he cites, below. From a quick scan of his 170 comments, there’s a surprising number of people afflicted. Guess what the common association is.

Prurigo Pigmentosa – The Ketosis Rash Nobody Warned Me About 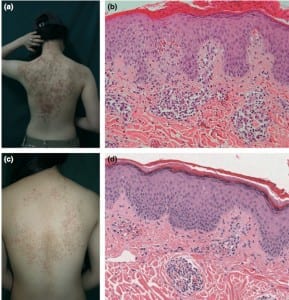 This has been a Public Service Announcement from Free the Animal.