What Childhood Image Does the Word “Beans” Conjure?

For my wife, of Mexican descent, it’s solidly pinto beans. We make them a lot around here. Had them for breakfast with an o/e egg and bowl of fruit both Saturday and Sunday.

But when I was a kid, I knew nothing of pinto beans. Chili was chili. There was baked beans, but like chili, not very often.

Nope, for me, “BEANS” meant we were having navy beans with ham in it. I didn’t much care for it as a kid. When mom said “BEANS,” it was always a disappointment. Not sure why. Perhaps it was just the least favorite; or more likely, that a single dish was the meal in itself. …And hell, even breakfast had eggs, bacon, toast, and jam.

Yesterday, I made it for the first time. As you might imagine, these days and ages afford perhaps more of the ham than 4 growing boys got on a single plate in the early 70s.

The “recipe” is ridiculously simple:

Here’s how I did it.

I didn’t soak the beans (sometimes I do; I do both). Rinsed and into the crockpot with the shank, ham steak, onion, quart of Kitchen Basics UnSalted Chicken Stock, and water to cover the shank. Took about 5 hours on high for the shank meat to melt off the bone, then I let it sit there on high for another hour, uncovered, so some of the liquid would reduce off, thicken a bit, and concentrate flavor.

I needed to add zero salt. I say again, never add salt to a dish where liquid will reduce, until you’re done. Sometimes, it might not need any—most commonly with cured or smoked pork in the mix. 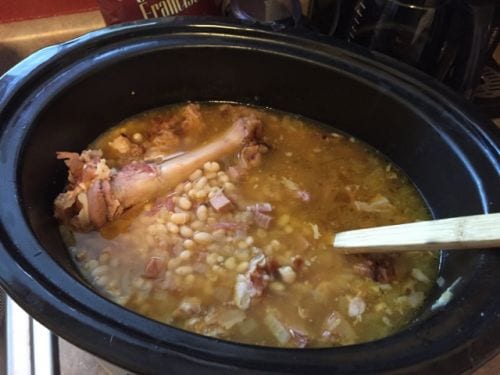 The way to get “bone broth.” Put a bone in your damn dish! 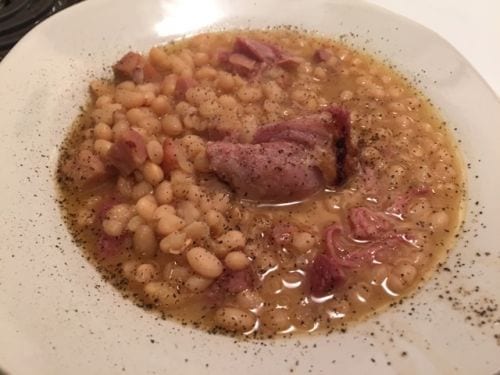 No salt or fat added, but I do like finely ground pepper.

If there’s any recipe or dish I post you might be inclined to try, do this one, exactly as outlined. Sit down when you eat because your knees might buckle from flavor intensity and pure mouth-feel satisfaction.

Someone recently asked me in comments what I think in terms of weight loss. We’ve been doing rice, beans and potatoes as staples around here recently. I have leftovers for days on that one above. Of all three, I think beans hold the best promise in terms of satiation leading to eating less, while getting very decent nutrition. I had that bowl at 7m last night and it’s 9am next morning. I am only just beginning to feel the first tinges of hunger, and it’ll be another bowl of that, reheated.