Just another mishmash of links and commentary

1. Am I imagining things, or did Dr. Mike Eades just dismiss by implication, a few dozen arctic and Inuit researchers going back over 100 years as “lack[ing] an understanding of basic biochemistry?”

After all, it’s quite clear, if one actually reads the post, that it’s almost entirely a review of all the research literature going way back, including the research of August Krogh, winner of the 1920 Nobel Prize in Physiology or Medicine for his discovery of the capillary motor regulating mechanism—nothing to do with biochemistry. Duck didn’t assert anything. He merely quoted the literature, demonstrating that it was all reaching the same conclusion: that it either directly or by implication contradicts Stefansson’s Friendly Arctic Fairy Tales and thus, contradicts Eades as well.

Lessons From the Vegans: What the Paleo Movement Can Learn From the Success of Plant-Based Diets

The paleo diet has a growing reputation for assisting in weight loss, managing or treating chronic disease, and boosting quality of life for those who follow its tenets. Yet low-fat, plant-based diets — which are also gaining popularity in the mainstream — appear to produce similar successes using a vastly different approach. How can such a dissimilar diet have health effects that mirror those of paleo? This presentation examines the reasons behind the success of plant-based diets, and discusses what the paleo movement can learn from them. In doing so, we’ll gain a new perspective on the strengths and weaknesses of the paleo philosophy and question some common paleo “truths” that may not be as solid as we currently believe.

Had I not directly seen for myself and in my comments what the potato hack can do, I’d probably be highly skeptical of Denise’s presentation. But I have, so I’m not.

3. What kids around the world eat for breakfast.

I had to find an excuse to post a pic of this adorable kid-face. 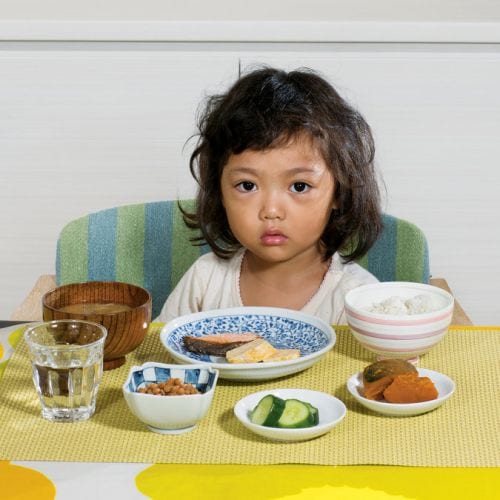 Natto is her favorite food

The first time Saki ate the fermented soybean dish called natto, she was 7 months old. She promptly vomited. Her mother, Asaka, thinks that perhaps this was because of the smell, which is vaguely suggestive of canned cat food. But in time, the gooey beans became Saki’s favorite food and a constant part of her traditional Japanese breakfasts. Also on the menu are white rice, miso soup, kabocha squash simmered in soy sauce and sweet sake (kabocha no nimono), pickled cucumber (Saki’s least favorite dish), rolled egg omelet (tamagoyaki) and grilled salmon.

Check out the rest. Most of it puts most of what typical American kids eat to shame.

4. “This Video Of Second Graders Being Treated To A $220 Seven-Course Tasting Menu Is Utterly Delightful” (Digg)

Well, I find it depressing and sad, though their behavior is generally exemplary.

As part of their Food issue, the New York Times Magazine sent six second graders from Brooklyn’s PS 295 to dinner at Daniel, one of New York’s fanciest restaurants. Each kid was served a seven-course tasting menu that goes for $220 a person.

Now, imagine all the kids featured in #3 in the same setting.

5. Is eating behavior manipulated by the gastrointestinal microbiota?

Microbes in the gastrointestinal tract are under selective pressure to manipulate host eating behavior to increase their fitness, sometimes at the expense of host fitness. Microbes may do this through two potential strategies: (i) generating cravings for foods that they specialize on or foods that suppress their competitors, or (ii) inducing dysphoria until we eat foods that enhance their fitness. We review several potential mechanisms for microbial control over eating behavior including microbial influence on reward and satiety pathways, production of toxins that alter mood, changes to receptors including taste receptors, and hijacking of the vagus nerve, the neural axis between the gut and the brain. We also review the evidence for alternative explanations for cravings and unhealthy eating behavior. Because microbiota are easily manipulatable by prebiotics, probiotics, antibiotics, fecal transplants, and dietary changes, altering our microbiota offers a tractable approach to otherwise intractable problems of obesity and unhealthy eating.

That about says it all and has everything to do with my approach to all of this. Now, when I see all this ‘metabolic, hormonal pathway’ masturbatory stuff out there that doesn’t contemplate the astounding complexity of the gut, I just laf. It’s like watching a bunch of people strut around showing off their candles, while LED floodlights are now available. Here’s what the paper covers.

Modern biology suggests that our bodies are composed of a diversity of organisms competing for nutritional resources. Evolutionary conflict between the host and microbiota may lead to cravings and cognitive conflict with regard to food choice. Exerting self-control over eating choices may be partly a matter of suppressing microbial signals that originate in the gut. Acquired tastes may be due to the acquisition of microbes that benefit from those foods. Our review suggests that one way to change eating behavior is by intervening in our microbiota.

It is encouraging that the microbiota can be changed by many interventions, hence facilitating translation to the clinic and public health efforts. Microbiota community structure changes drastically within 24 hours of changing diet [14, 115] or administration of antibiotics [116]. Fecal transplants have shown efficacy in treating a variety of diseases [117]. The best approaches to managing our microbiota are still open questions. Many studies of the effects of gut microbes on health have focused on identifying individual taxa that are responsible for human diseases, an approach that has been largely unsuccessful in generating predictive hypotheses. Studies have identified conflicting different groups of microbes associated with various diseases, including obesity [118, 119]. In other domains, it has proven useful to shift the level of analysis from properties of the individual to properties of the population, e.g. diversity [120]. Until we have a better understanding of the contributions and interactions between individual microbial taxa, it may be more effective to focus interventions on increasing microbial diversity in the gut.

Competition between genomes is likely to produce a variety of conflicts, and we propose that one important area, impacting human health, is in host eating behavior and nutrient acquisition. Genetic conflict between host and microbiota – selecting for microbes that manipulate host eating behavior – adds a new dimension to current viewpoints, e.g. host-microbiota mutualism [11], that can explain mechanisms involved in obesity and related diseases.

[emphasis added – keep it in mind when reading some of the stuff I’m seeing now that I consider far too clinically focussed for most people, far too deconstructed and reduced. Shotgun is going to be best for most people most of the time.]

…Of course, I’m sure all the microbiome researchers ‘lack an understanding of basic biochemistry.’ …

Update to #1: Here’s a follow up comment from Eades in response to the same person pointing out:

The article quotes over 20 different studies on the Inuit—spanning a century—including from a Nobel prize winning scientist August Krogh.

You don’t seriously expect anyone to believe that all of those scientists don’t understand “basic biochemistry” do you?

Well, I guess he does expect everyone to believe it. Eades:

They didn’t understand about glycogen degrading back then. If you want to believe the Inuit weren’t on low-carb diets, be my guest.

I’m disappointed that Eades is still stuck on the minimal glycogen the Inuit consumed, rather than the fact that every study on the Inuit shows they were too high protein to be in ketosis. Nevertheless, he seems completely uninformed about what researchers knew about glycogen, at the time. I’m beginning to wonder if Dr. Eades is even bothering to read any of the scientific literature on the subject. Yesterday, Eades wrote:

mreades wrote: They didn’t understand about glycogen degrading back then. If you want to believe the Inuit weren’t on low-carb diets, be my guest.

Well, first of all, nobody said the Inuit weren’t low carb. The scientific literature states over and over again that they ate very high quantities of protein and weren’t ketogenic. Second of all, it’s patently false that researchers were unaware of glycogen’s rapid degradation at the time. In fact, its rapid degradation observed in 1865 was how Bernard discovered glycogen in the first place.

From: Claude Bernard and The Discovery of Glycogen Discovery of Glycogen At this time Bernard’s estimations of the sugar content of extract of liver tissue were made in duplicate by titration with copper reagent of Barreswil, a modified Fehling’s solution. He relates (Bernard, 1865, pp. 2291-295) how one day he was pressed for time and was unable to make his duplicate determinations simultaneously. He made one estimation immediately after the death of an animal and postponed the other until the following day. The second estimation gave a value very much higher than the first, and the difference was so great that Bernard investigated the reason for this discrepancy. Hitherto he had not ascribed significance to the length of time which elapsed between the death of an animal and the determination of the sugar content of the liver tissue. He now found that time was of great importance. Immediately after the death of an animal the liver was found to contain very little sugar, but within only a few minutes the amount of sugar had substantially increased, and at the end of two hours a large quantity had usually made its appearance.

So, from day one, glycogen was known to degrade rapidly. But, Eades has so much confirmation bias running through his blood, he refuses to recognize that glycogen in marine mammals was observed to degrade differently.

From: Observations On The Glycogen Content of Certain Invertebrates and Fishes Until recently very little information existed concerning the presence of glycogen in the fishes. That some at least is present in the tissues of marine fish had been shown by Cl. Bernard, Pavy, Brucke, and others. It was stated by Bernard that this glycogen is unusually resistant to the influence of post-mortem changes, and that it does not readily disappear during hunger. During asphyxia, however, the glycogen rapidly disappears.

Even in 1970, researchers found high levels of glycogen in some species of fish after 7 days on ice, at 0ºC.

From: Postmortem Glycolytic and Other Biochemical Changes in White Muscle of White Sucker (Catostomus commersoni) and Northern Pike (Esox lucius) at 0ºC “…Glycogen content of pike was found to remain relatively high even after 7 days of storage in ice. This is in contrast to the findings with several other species, including white sucker, where the muscle glycogen is practically completely degraded in 3–4 days.”

Eades is wrong on just about everything he stated in his “confirmation bias” post, but doesn’t have the decency to read anything that might enlighten his biases. What a joke.

Well, I guess I can be thankful I wasn’t imagining things. I’d expected to get hand-waving over that—HE WAS ONLY TALKING ABOUT “DUCKS DODGES!” So, thanks for clearing that up, Mike.