I’ll admit to breathing a sigh of relief back in October of 2007, when Peter at Hyperlipid posted about “Physiological insulin resistance.” Curiously, looking at the post again, I note that he didn’t capitalize the second two words—as though it’s not a proper name for a specific condition.

Back in mid summer 2007 there was this thread on the Bernstein forum. Mark, posting as iwilsmar, asked about his gradual yet progressively rising fasting blood glucose (FBG) level over a 10 year period of paleolithic LC eating. Always eating less than 30g carbohydrate per day. Initially on LC his blood glucose was 83mg/dl but it has crept up, year by year, until now his FBG is up to 115mg/dl. Post prandial values are normal.

He wanted to know if he was developing diabetes. […]

Whew! Now I had something to tell my dad and others who’d been faithfully doing LC and became horrified, then scared, at fasting blood glucose measurements (which is primarily how the health community screens people for diabetes). I really didn’t concern myself with it again—for all these last almost 7 years. OK, so long as post-prandial is fine (caveat: AFTER AN LC MEAL!), nothing to worry about; and combined with good HbA1c, and the fact that so far as we know, this condition will reverse in normal people after a few days of carbage, then just relax.

…That was until earlier this year when one of my collaborators, “Duck Dodgers,” clued me into something. What if there are no populations on earth that we know of where you can observe the long-term effects of “physiological insulin resistance?” I mean, Kitavan vs. Inuit was always a kind of implicit A-OK. ‘Ok, so the Kitavans do fine on an 80% carb paleo diet. But they’ve never eaten SAD. Moreover, the Inuit are healthy too. And they’re always in a state of deep ketosis, ‘keto adapted,’ other buzzwords, etc. They eat almost no carbs, etc., etc.’

…Uh, then you would expect them to feature “physiological” insulin resistance—just like the thousands of LCers in various forums, my blog comments, and in my dad—right?

…Uh, but you don’t observe it. They don’t even feature elevated ketones.

To Reiterate, Just In Case You Missed It: No Elevated Ketone Levels in the Inuit

Since this post the other day and subsequent exchanging of some emails and comments here & there with those I’d generally consider advocates of very low carb dieting—to include those advocating near perpetual states of ketosis—I’ve been met with surprise bordering on disbelief that indeed no, the Inuit are no more a “ketogenic society” than anyone else across the planet Earth.

And if not, then there is literally not a shred of any basis that chronic ketosis is a healthy state to be in (and so sorry, but I’m just guessing it’s not “nutritional,” either).

First, this confirms to us what Peter was saying back in 2007 when everyone was ignorant of this research and alarmed at their physiological insulin resistance (PIR). All of that is our physiologic response; not evidence, per se, that extended ketosis or sufficient LC dieting to induce PIR is a very bad thing. In other words, it all makes perfect sense. There is no surprise. I believe this is what Peter was saying originally, and his ‘failure’ to capitalize two words in a title signals to me that this was where his mind was at: ‘Don’t really know for sure if it’s good or bad; but makes perfect sense as a normal physiological response to input stimuli.’ Correct, Peter?

But why? How come the Inuit—the Gold Standard of We Can Do This!—were not in perpetual ketosis and could take a bolus dose of glucose and display Physiological insulin sensitivity?

Here’s two clues as to why.

…Turns out they actually ate a lot more carbs than anyone ever thought. Mostly, by eating kills raw, fresh, or frozen, preserving muscle and liver glycogen—as well as nose-to-tail, with lots of bits that gut bugs feed on, just like plant fibers (‘animal fiber’). Moreover, they partake of a very unique niche, where the demands of diving sea mammals means that they store lots of carbohydrate in what’s supposedly just fat. Perhaps that’s why they call it blubber, not fat?

What Did Indigenous People Inhabiting the Coldest Places on Earth Really Eat?

From: Lawrie’s Meat Science by R. A. Lawrie, David Ledward, p 92, (23 Jan 2014) A much delayed onset of rigor mortis has been observed in the muscle of the whale (Marsh, 1952b). The ATP level and the pH may remain at their high in vivo values for as much as 24h at 37ºC. No adequate explanation of this phenomenon has yet been given; but the low basal metabolic rate of whale muscle (Benedict, 1958), in combination with the high content of oxymyoglobin in vivo (cf 4.3.1), may permit aerobic metabolism to continue slowly for some time after the death of the animal, whereby ATP levels can be maintained sufficiently to delay the union of actin and myosin in rigor mortis.

One Thousand Nails in the Coffin of Arctic Explorer Vilhjálmur Stefansson, and His Spawn

It turns out that marine mammals that spend a good deal of their time diving to great depths have significant glycogen stores. Sperm whales make routine dives to 400 meters for 40 minutes and can reach a maximum depth of 2000 meters (6,560 feet, or 1.25 miles). Narwhals make some of the deepest dives recorded for a marine mammal, diving to at least 800 meters (2,600 feet) 18 and 25 times per day every day for 6 months, with many dives reaching 1,500 meters (4,900 feet). Narwhals have been recorded diving to as deep as 1,800 meters (5,900 ft, over one mile). In addition to making remarkably deep dives, narwhals also spend more than 3 hours per day below 800 meters—this is an incredible amount of time at a depth where the pressure can exceed 2200 PSI (150 atmospheres).

[Editor’s note: most of your grilled Paleo land food lives its entire life at about 1 atmosphere.]

During their deep dives these marine mammals run out of oxygen and switch to their unique glycogen-based energy stores. They store large quantities of glycogen in very odd places, but it typically gets concentrated in the skin and organs. Researchers have discovered significant “glycogen pools” in the narwhal’s arterial thoracic retia. Ringed seals have “large quantities of glycogen” in a gelatinous material near their sinuses. A sperm whale’s blubber ranges from 8—30% carbohydrates, mostly believed to be glycogen. The hearts and brains of weddel seals have concentrations of glycogen that are two to three times that of land mammals. Furthermore; in marine mammals, these organs tend to be larger in proportion to the total body weight than in land-based mammals.

In 1973, George and Ronald wrote about the harp seal, “All the fiber types contained considerable amounts of glycogen…it is postulated that the seal muscle is basically geared for anaerobic use of carbohydrate as an adaptation for the animal’s diving habit.”

Let’s continue with the delicious iconoclasm, shall we?

Why? Because, unlike the Inuit in 3 studies over 44 years, they could not pass a glucose tolerance test on the diet they were eating, when tested at the very end of it. Why? Because, as I said, it was very far from an Inuit diet; thus non sequitur; and literally, NOBODY has made this connection but for Duck, to me, to promote to the unwashed.

From that link, here’s Stefansson’s glucose tolerance at the conclusion of his Belleview experiment. (Anderson’s was worse.) 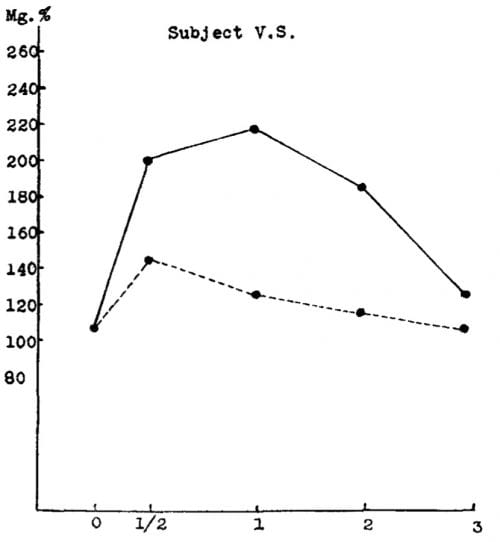 Need I remind you of how the Inuit test subjects faired in three separate studies separated by 44 years after not just a year, but a lifetime of eating their traditional diet? Occam’s Razor: were Stefansson and Anderson just way different than Inuit physiologically, after a year in a metabolic ward, or did they simply not eat a real Inuit Diet? 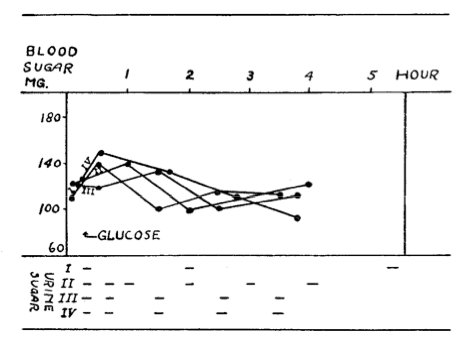 Oh, yea, I know: Inuit are “Keto adapted,” according to Dr. Michael Eades. Way to “explain” away a Black Hole, Mike. …Of course, the New York Times obituary for Stefansson didn’t call anything into question, so that’s evidence of absence.

…Alright, let’s wrap up this pagan, heretical infidelity in clashing icons. This post was motivated by a comment a few days ago.

“I have an approach to life. I resist insulin. Running on the edge of ketosis, with a major preponderance of long chain saturated fatty acids as metabolic substrate, I expect to be insulin resistant. I am. It is pure physiology.”

I like to have uncoupled mitochondria running with a relatively low delta psi, high oxygen consumption and low free radical leakage. On isolated occasions, a few times a week, my parsnip chips will spike my blood glucose and delta psi for an hour or so and generate a few extra superoxide/H2O2 molecules above basal levels. I hope that’s enough for generating a decent number of healthy mitochondria. I don’t know if I am correct.

Do you know what made me love Peter from day one in 2007? His sidebar. It reads differently now; but back then, it said he was a veterinary doc. Said he was practicing a high fat Optimal Diet a-la the Polish guy, which whom I’m not going to take the time to Google, to get the spelling right. Starts with a Kw. Very, very most notable: he had up there words to the effect that he doesn’t know if he’s right, but he keeps checking PubMed.

I read everything he posted and I told people routinely: “don’t go to an MD, go to a veterinarian. They’re species agnostic. They understand all about mammalian, even reptilian physiology, and dismiss doG and his meaningless distinctions.”

Later, Peter helped me greatly extend the life of our beloved rat terrier Rotor (about 3 years) when he developed EPI. I even got an email or two from Peter after the initial barrage: “how’s Rotor?” Beatrice thinks Peter is a doG.

…I wonder if Peter would enjoy so many folks out there saying “well, it’s physiological,” as though to say it’s necessarily ok, or even correct and right. I’m not getting that from the originator himself.

I think Peter never meant to convey the idea that because something makes perfect logical sense in terms of what we know about the physiology of organisms (remember, he’s species agnostic), that’ it’s right, wrong, or indifferent. It just is, and:

You’re still on your own. PubMed.

So, how about: Low Carbohydrate Diet Induced Insulin Resistance? And now, onus is on all y’all to demonstrate how that’s the optimal place to be for life, given that even the Inuit don’t demonstrate it.