What If You Ruin A Vegan Potato Salad With Chicken Stock?

Nope, I’m talking about yesterday’s post: What If You Modified Dr. McDougall’s Program To “Starch-Based Paleo?” I was prepared to duck for cover; but as it turns out, the comments are not that at all. Rather, I see a combination of folks who’ve already adopted something similar, along with folks asking some of the same questions that plague me.

For instance: is added fat in any way paleo or Primal? No, it’s not. Rendering and isolating fats is solidly a neolithic/agriculture/pastoralist thing. Can we be honest with ourselves? Is a huge part of the backlash over Paleo over the last half decade well deserved—with its images of bacon in pounds, and swimming pools of added fat? On the other hand, I’m no big vegan fanboy. Just ask DurianRider: Live Debate: The Animal (That’s Me) vs. Durianrider (Raw Fruit Vegan Harley Johnstone).

Over the ensuing years, it has nagged at me that I think they’re just both very wrong, but for different reasons. The vegans are just wrong because they’re fucktarded about basic anthropology and simply dismiss mountains of science that we’ve been omnivores for a very fucking long time—and gorillas get more animal product than vegan humans (via insects). It was the Tiger Nuts, however, that made me realize that Paleo, as currently peddled, is just as fucktardedly wrong. Different reasons.

And so, I’m at the point where I desire to see if there’s a possible synthesis between the two. Real Food veganism has profound elements of paleo, and they rightly put paleo in short pants over some things (like added fats). And bacon is just not paleo in any stretch of the imagination, nor are virtually any of the snacks and treats from the flashy money whores out there. Nor are any of the similarly fucktarded “paleo” websites devoted to baking shit.

So, in some respects, the Real Food vegans are more paleo than faux Paleo. But, just as for the low carbers, no animal is as fucktardedly baked into the cake as is the fuclktardism of no-or-low carbs.

Pissed off, yet? If not, then here. Let me help some more. 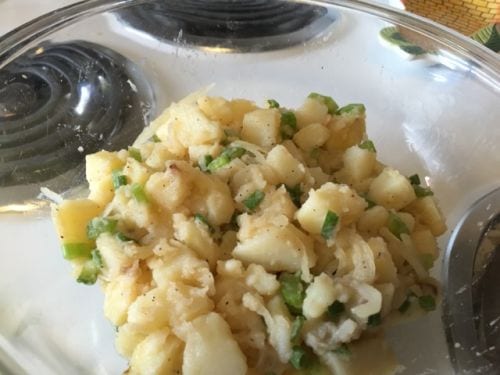 THREE TABLESPOONS TO PISS OFF VEGANS!

…After yesterday’s post, I got into in-for-a-penny-in-for-a-pound mode. I’m curious. I actually have never done anything but a relatively high meat/fat diet. It was more “balanced” when I was growing up—vegetables and starches were always part of every meal. Meat was always treasured but as I retro-spect, so were so many of the veggie or starch preparations. I have my mom’s cookbook and it’s loaded with vegetable preparations across the board.

So I’m just going to do an experiment where fruits and starches make up the foundation, augmented with all that leafy shit, plus an egg every now and then, and meat/seafood measured in ounces.

What happens? I don’t know. What I do know is that I’m not afraid of the result in any slight manner. I embrace the ‘what it is, is.’ Do you? What really stops you from taking any action out of your comfort zone? Is it fear on various levels, or is it something rational?

Here’s the vegan foundation of that dish:

What I did was:

So, see how adding chicken stock ruined it for vegans? Fucktarded? Of course.

See how it’s potatoes, ruining it for physiologically insulin resistant VLCers and diabetics, convinced that their pancreas and metabolism must remain a couch potato in fear of a spike—analogous to a rapid heart beat when climbing stairs after a year of playing Call of Duty? Fucktarded? Of course.

Later, I’m going to piss off vegans and LC/Paleos even more. I have a half dozen chicken thighs in the fridge. I’m going to broil them, no added fat. Then, I’m going to eat exactly one of them (2-3 oz of actual meat, I guess) with about a half plate of that potato salad.

So, it pisses off the vegans twice, and the Paleos, twice or more:

OK, I didn’t even start writing this post until I tasted the dish. Never had a fat free potato salad before. I hope there’s enough left for Beatrice and the chicken thighs…. Now I’m thinking about a million ways I can fuck with this recipe.