First, here’s the background for review, if you’re just getting wind of all this.

Those last three are posts over the previous three days in succession. Note the comment threads. Nearly uniform acceptance as a plausible idea.

But let’s refine it a little more. In #2, above, the primary focus was an introduction using Denise Minger’s AHS14 presentation on what we might learn from vegans. Moreover, the emphasis was on VLFHC vegan diets that reverse T2 diabetes (yes, reverse; since diabetes is a dysfunction of carbohydrate metabolism; and since this is high carb, it’s reversal; VLCHF diets merely control). So in terms of these reversing diets being 10-15% fat from whole foods with no added fat, I’m looking to them as experimental for those curious who wish, diabetics, and the metabolically superfucked. Plus, I allowed for small bits of all whole animal products.

#3 was a fun post with lots of calls out to fucktardedness on both extremes.

#4 demonstrates we’ve probably been right all along about resistant starch, but this in a food and not supplemental context. It includes a chart, so neener.

…Let’s talk about old Art De Vany, the granddad. So yesterday, I’m sitting around a lot in contemplative lafing: at myself. So sad his blogging archives from back ’round 2007 and 8 aren’t around. He was the original “paleo Food Pic” guy. Let me tell you what I recall in fundamental terms:

And so, I wonder. Was Art more properly described as a moderate carb (plenty of fruit, beer and dark chocolate sometimes), moderate fat (almost all from the whole foods he ate), and moderate to high protein (although, many of his plates of protein were leftovers from a bigger plate of protein)?

Folks have brought up Cordain in comments in some of those posts above, but Art seems like a better guiding light to me. Both are generally anti-starch, but Art wasn’t afraid of fat, nor was he a lean protein guy. And, apart from the low fat experiment above, I’d like to see a place where we’re not afraid of fat in any foods, but that’s where we keep it. We don’t refine and isolate it, then augment all of our meals with added fat from an elsewhere.

So, here’s some off the top of head thoughts on how this might work.

Here’s a few theory-to-practice applications from the last few days. 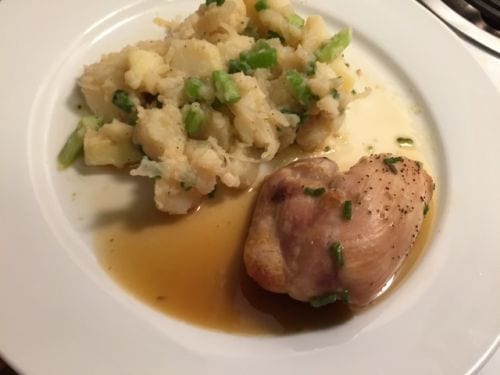 I blogged the potato salad here. It’s no-added-fat vegan, but rendered poisonous because there’s a few tablespoons of chicken stock in the recipe.

That would be a skin-on, bone-in chicken thigh, but I was pressed for time and it’s all I could source. The reduction (for 2 servings) is three soup ladles of my recent chicken-apple soup broth, reduced to about 6 tablespoons. A pinch of tarragon (less is more with tarragon) and some black pepper. The soup had been seasoned, so no salt (I was reducing), and I didn’t salt the thigh either, for that same reason. 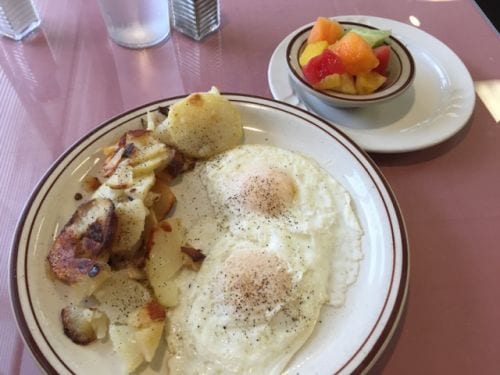 Gunther fries my eggs in butter (always perfect o/e), as well as finishes the German potatoes in butter, too. The potatoes are previously boiled, taken from the fridge to finish (remind you of something?). But as you see, no pools of fat on the plate. Used to be, he’d serve with fresh butter and I’d create those pools. No paleo Bacon! Fruit in place of the toast or English muffin dripping with butter. Gunther’s fruit salad is prepared the day before and marinades in the fridge overnight…in orange juice. Fucking best fruit salad you’ll ever have. 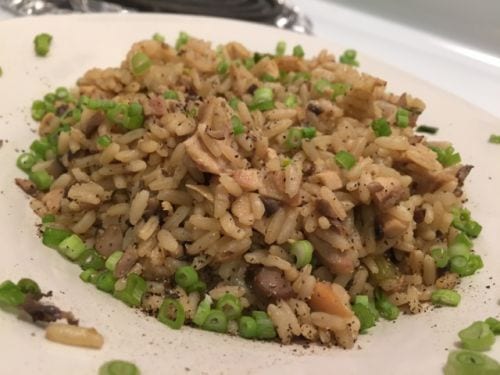 This was crazy good. Made it last night in the rice cooker. Remember, small fats for cooking, no added fat. So, I first toasted 2 cloves of garlic in a tiny bit of butter, then added about 6 chopped crimini shrooms  and 1/3 chopped yellow onion to sweat and bring out the flavor (1tsp salt). Added about 1TBS chicken stock to help. Into the rice cooker, along with a chopped stalk of fresh celery, 2 broiled chicken thighs left over from the dish above (none of the fat rendered from broiling, just like grilling), 1 cup of parboiled rice, and 2 cups of the aforementioned chicken stock.

When done, I opened the cooker to let moisture escape. Don’t want soupy for this dish. Then, I added chopped green onions and stirred them in. Let it sit for a few minutes. Then I served with a fresh green onion garnish, plus liberal finely ground black pepper.

So, 2 chicken thighs and their included fat, but no added fat, and it rendered dinner for Bea and I, and it’s lunch for both of us today as well (cooled overnight and reheated).

I will continue to experiment with all of this. Go and do likewise.