Cooking, Cooling, and Reheating Starches For Even More Digestive Resistance

One of the more common questions we’ve had since the very beginning of the Resistant Starch Explosion is: if cooling your cooked starches (e.g., potatoes, rice, beans, pasta) increases the resistant starch (retrograded RS3), will reheating it destroy it?

It was Tim Steele who came up with the info that not only does it not destroy the RS3, successive cooling and reheating actually increases it—though the the first cycle is by far the biggest bang.

Well, so now we have some testing on real people, using pasta: Is reheated pasta less fattening?

The volunteers were randomised to eating either hot, cold or reheated pasta on different days.

On one day they got to eat the pasta, freshly cooked, nice and hot with a plain but delicious sauce of tomatoes and garlic.

On another day they had to eat it cold, with the same sauce, but after it had been chilled overnight.

And on a third day they got to eat the pasta with sauce after it had been chilled and then reheated.

So what did happen?

Well we were fairly confident the cold pasta would be more resistant than the stuff that had been freshly cooked and we were right.

Just as expected, eating cold pasta led to a smaller spike in blood glucose and insulin than eating freshly boiled pasta had.

But then we found something that we really didn’t expect – cooking, cooling and then reheating the pasta had an even more dramatic effect. Or, to be precise, an even smaller effect on blood glucose.

In fact, it reduced the rise in blood glucose by 50%.

So there you have it. Short & simple, too.

It makes me wonder if this is why I didn’t get fat eating all that pasta at the mom & pop Sicilian place down the street from my flat when I lived in France. I’d walk down 2-3 times per week and if it wasn’t a wood fired pizza, it was a bowl of pasta. But I recall one evening asking their son, Salvatore (who’s limonadier he gave me when I left is still used to open wine around here, 22 years later), how they do their pasta so quickly, in single batches.

They precook it and put it in the fridge. Then they reheat in salty, boiling water, portion by portion. Go figure.

And here’s a chart I clipped. 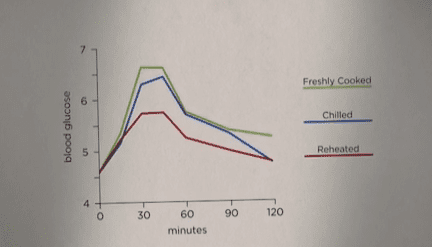 Update 2: This appears to work for freezing and toasting bread, too.

The impact of freezing and toasting on the glycaemic response of white bread.

CONCLUSIONS: All three procedures investigated, freezing and defrosting, toasting from fresh, and toasting following freezing and defrosting, favourably altered the glucose response of the breads. This is the first study known to the authors to show reductions in glycaemic response as a result of changes in storage conditions and the preparation of white bread before consumption. In addition, the study highlights a need to define and maintain storage conditions of white bread if used as a reference food in the determination of the glycaemic index of foods.