Well, Given a Gaudy Shirt, We Sure as Must Need to Put a Woman on Mars, Now

Anyway, some geek scientist that helped happen an unwomaned lander land on a rapidly spinning comet in space, traveling at a bazillion MPH wore a shirt that a only a true geek, autistic savant, or Aspergers would wear in public. Or, perhaps an asshole like me, whilst sporting a grin and a middle finger.

Via Amy Alkon: David Burge with the nutshell on the furor:

@Iowahawkblog
“Man Forced to Apologize for Sexist Shirt After Successfully Landing Spacecraft on Comet” has to be the ultimate headline for our age.

JB frames it exactly right for my taste.

I love what Janet and others do in the men are men space, it’s just not my quotidian bag. I’ve never been with A Stupid as man-woman deal (avoid plagues); and as an employer, I easily filtered out such Stupid from every person hired (I discriminate). Easy to filter. Just give ’em rope. My mom—and grandmother, and great grandmother, in their living days—lafs at the impotence of feminists and their childlike entitlement angle. …My great grandmother dumped a number of men, raised two kids by herself during the Great Depression—had her first kid of two at 15. She was 58 when I was born, died when I was 29.

Sorry children-femmes: my great grandmother taught me what a real woman of adult determination was like. She never pouted about men. Actually, I don’t think she ever worried much about them, untoward like. She adored her great grandkids, though. I know, firsthand. When I was a boy, a trip to see grandnanna was just the dessert of life, then.

But with feminism, it’s those High-School Bitch films all over again.

This blue comet upon which we dwell is now simply swimming in meaningless feelings. Everybody has feelings. Feelings have become as ubiquitous and as faux ”important” as the latest narcissist Facebook update you saw of someone’s check-in, or what they happen to “think” about something.

I don’t give a fuck about anyone’s feelings. Not truly. Not when its unimportant; and the world I live in now is most focussed on the unimportant and facile.

Why should you? Care, I mean. If someone has some legit beef about something, U did them wrong in some way; …or, perhaps they care about you enough to let you know that they think you’re just wrong, but with actual adult-like reasons? We don’t do that on this comet, anymore. We’re all rushing to be narcissist, solipsist children as fast as possible—and there’s many apps for that…

In short—and it’s getting embarrassing to post about this anymore—dealing with feminism is simply an exercise in dealing with children. And, as you know, it’s always, and always: for the children. THE CHILD…REN! Yea, 100% of feminists bought that pathetic wife of a public presidential philanderer line, and: It Takes a Village.

Feminists are a CAFO OF USELESS BULLSHIT FEELING.

…I liked this JB riff the best:

A woman made the shirt for him. There’s your first clue, Einstein. That shirt does not offend or demean 50% of the world’s population. It offends joyless, petulant, irrational, victim worshipping feminists cunts like you!

Yeah, yeah, cunt is a bit harsh, but do you know why I like using those words, especially to describe feminists? It’s a way of iterating, forcefully, that their precious feelz matter not one fucking bit to me. Women’s feelings do not matter more than men’s feelings, women do not have the right to walk through life in a state of perpetual comfort, never offended by anything at any time anywhere. It is not wrong to offend women and most women know this already!

It’s feminist bitches who seem to think the world owes them permanent obsequious and obedience. Remember this pathetic attention whore? Tweeting out her butthurt over a Dongle joke that wasn’t even addressed to her?

As I said, this stuff is just not particularly in my wheelhouse (see the meter at the top). I’ve had my run ins, but they fade away. I never cared a runny shit for their feelings. JB can probably get away with using THE C-WORD, since she’s a woman. Oh, wait. She loves and celebrates men, and derides feminists. Nevermind.

…The thing Janet is deriding, though, is the idea that things like a geek wearing a “sexist” shirt (rather than in simple bad taste, like your great grandmother taught you) is what’s keeping women from pursuing STEM carriers.

They hear comments about “bitches” while out at a bar with fellow science students, and they decide to change majors. 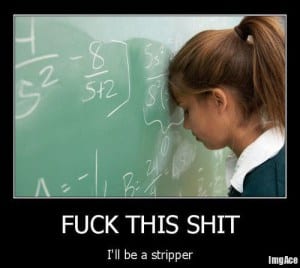 From my perspective on this comet for nearly 54 years, women make it go round one way; and men, another. Neither orbits nor rotations are pristine. It’s evolutionary and animal. It ought be free.

Clearly, feminism is no longer about demanding that women be treated as equals, but as eggshells.