How many Paleo Gurus have switched out an engine in a car? Or, did their own tuneups, even filing points in the distributor cap and re-gaping spark plugs?

How many know fuckall about how to remodel a house, do plumbing, electrical, basic carpentry, and wall finishing? I once added $350K of value to a house with a $125K investment, doing much of the stuff myself—managing sub-contractors like a penny pincher for the rest?

…I was disappointed that I didn’t get to be a Navy jet pilot when I wanted, instead tending to ships. But it worked out, and I love flying hang gliders. Was right in my realm. Turns out that the hands-on work required to get a steam plant operating continuously, 24/7 for ocean crossings, is real work.

Free agency is only wonderful for millionaire sports stars. 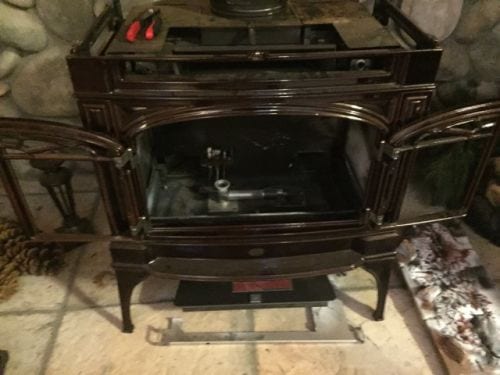 That’s my disassembled gas fireplace at The Cabin. Turns out the thermocouple is bad (pilot light won’t stay lit). Moreover, the piezoelectric starter has never worked and so I’m going to sort that too, today.

I have a Williams wall furnace as well, as backup. It has a bad thermostat (that was an easy troubleshoot once I got into the online manual). But I want to replace it with a WiFi thermostat. No, not Nest. My brother has one. It’s $150 overpriced. Honeywell has a model for $100. Problem is, even though this is a newer wall furnace with a fan and uses power to light rather than a pilot, it has only a red and white to the thermostat, like a microelectronic system (the gas fireplace), where the thermocouple supplies enough micro voltage—via heat and metallurgy—for the thermostat to operate.

I’ve had digital thermostats for years and all ran on batteries. But WiFi will drain those real quick, so it needs continuous power from the grid, via the transformer in the furnace. So, I have to route the C or G wire. I’ll probably run it out the back of the cabin, and then back in.

My point is that this is your environment. You can use division of labor all you like. I do too. The dishwasher would not drain out. I have a general understanding of how dishwashers work (a water pump is critical) but didn’t want to spend the time. $80 for an old appliance guy who knew exactly where to look first. We had to take the thing out, bail water, turn it over. It was a piece of glass stuck in the water-pump impeller. No parts required.

Women have had a general dispensation for a long time against having to know this stuff or figure it out. Rightly so. They tend to the kids and the general living arrangements, while men hunt…even for appliance parts and online manuals so that they can understand how to rectify fucked up shit. If women want to do this, I have no prob with that. I’m happy to sit back and watch another episode of Game of Thrones.

Lots of men still do. Lots. Look at Home Depot and Lowes. They know a kind of admiration from their women no $500/hr lawyer—or PhD researcher, or guru—will ever know.