Life Gets In The Way Sometimes

Sometimes I just need a break from blogging, engaging much in comments, or keeping up with other related stuff—like emails.

So here’s just a quick review, encouraging you—if that’s what it is—to get away from the screen and keyboards and do some living.

First, I was up at my rental cabin all of last week. Beyond some appliance issues that needed addressing, there was “deep cleaning” that needed doing. While I have a cleaning crew to take care of the place between the 40-50 sets of guests per year, it’s mostly about linens and towels, surfaces, bathrooms, kitchen, and floors. So, I spent about 16 hours over 3 days doing “the hard stuff” by myself. Because of the back issues, I had to pace myself moving around furniture, climbing up and down ladders, bending down a million times. Appears to have been therapeutic. It’s nice to be sore from exercise rather than aching from chronic pain.

Headed out Saturday with everything intact. It was 45F outside and rainy. Spent the night in San Jose and we headed south Sunday (yesterday morning). Doggies too. 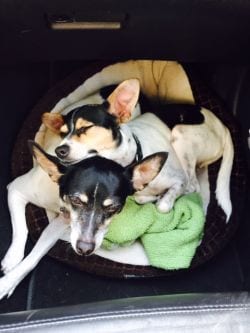 Drove through LA on about the most beautiful day I’ve ever seen there. Clear blue sky, 81 deg F. Guys were biking out on the 405 lightly dressed.

Got to Vista, CA in time to feed the dogs and head east about an hour to a Harrah’s Casino Resort on an Indian reservation, to watch both the 49ers against—ironically—the Redskins, and the Seahawks vs. the Cardinals. Both won, so both still tied for 2nd in the NFC West. San Francisco hosts Seattle at Levi Stadium on Thanksgiving day. Such football excitement. Well, now that they’re not all sporting pink anymore—in solidarity against the very most important disease in the history of the whole wide worldz.

…Tomorrow, we head down to Rosarito Beach, Mexico, for a couple of days; expecting clear skies and high 70s. I have trunks packed.

Back up here to Vista on Thursday in time for the game, and dinner. Then, it’s off to Las Vegas on Friday for a couple of days of systemic sin and debauchery. I don’t gamble, but it is kinda instructive to observe the Zoo Humans from time-to-time. We’ll head back to San Jose from there. And that’s the extent to which I’m able to peer into my future.

…In terms of the blog, my chief interest currently is Peter’s post about the gene mutation in the 80% of Inuit that keeps them from producing adequate ketones. The assumption is that this means their traditional diet is protective. However, research uncovered by Tim makes that not quite so clear. It’s possible it’s much ado about nothing much. We’ll see; but at any rate, since writing an extensive post on the subject last Thursday, then sitting on it until I understand more (with life getting in the way of that), I’m just not seeing how a population’s mutant gene means that a high fat, low protein, very low carb diet (“nutritional” ketosis) is everyone’s hunky dory and Duck’s and my series of posts constitutes a bunch of wanking in public.

What is clear, though, is that significant people didn’t read that series (they just KNOW it’s wrong, see), since they misrepresent what was actually written in it, and the research cited, at every single turn.

At any rate, the comment thread over there, at 76 and counting, is a pretty good read (Duck and Tim are there), so check it out.

Until next time, then. There’s a small little promotion, where you’ll be able to snag my book, or any of about 15 others a-la-carte, for 99 cents each, beginning tomorrow, for 24 hours. I’ll have a blurb up on the details tonight.