This popped up in my Twitter feed last evening, by Angelo Coppola. 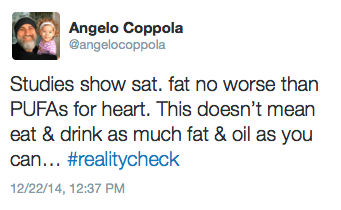 Then, I see “That Dead Paleo Guy” do a wisdom add deal on it, beginning right here.

The behaviour we are seeing with people drinking fat shows who is mostly to blame for the diet advice of the last 30 years. We have railed against and blamed the dietary guidelines for “force feeding” us carbs and starving us of fat…

When you look at the recent literature that suggests SFA (in the context of real food) is not the bogieman we thought, no where in that literature does this translate into drink large amounts of SFA. That is the doing of opportunists and the ignorant and gullible looking to lock onto the next quick fix. Who shall we blame in the future if that comes back to bite?

In NZ, the DG’s for fat have been one-third of total energy intake. This is nothing like the 97-99% fat-free rubbish. paleo “dietary guidelines” – eat real food, consisting of unprocessed plants and animals….translated by most popular sites – have your coconut sugar/maple syrup brownies, chocolate chip quinoa cookies…but just be careful with your date, coconut sugar, and carrot cake – because carrots have a high GI and lots of carbs.

Amen. Here’s what he said in his signoff post from That paleo Guy.

And when it comes to where Payleo™ is currently sitting, it is a case of “it isn’t me, it is you.”*

*The current paleofication of everything from chocolate fudge sundaes to celebrity chefs drives me completely mental.

Yep. But more than that for me is what I see as plain old gluttony. The meme is: if it’s “paleo Approved,” eat as much of it as you like; no, in fact, show off by pigging out and most especially, with fat. Or, don’t touch that potato or those legumes. They’ll make you fat, give you diabetes and kill you. Here, buy these glutenfreealmondflourlowcarbpaleo BROWNIES instead!

For me, just eating more mindfully that way and especially, cutting out most added fat other than dribbles here & there has made a tremendous difference. More on that later.

So, Jamie Scott has a new blog, Re|Evolutionary.

“Paleo” then was a nice simple heuristic – a shorthand if you like – for expediting the understanding of why that sugar-coated cereal with all its ticks, stars, and promises, is something you should perhaps best avoid. Or why the fat in eggs and avocados won’t likely kill you. Or why InstaTwitFace doesn’t count as socialisation. Or why 400km on a bicycle per week, bent into the shape of a question mark, and fueled by syrups, is probably not healthy movement – especially if you are already pulling 40 hours per week at work positioned and fueled in much the same position.

Couched in these terms, many people had that ‘ah ha’ moment where the cogs suddenly clicked into place and they were able to exact some very big lifestyle changes, on many fronts, and make them stick in the long term. I know this as both one of those people whose clogs clicked, and as someone who has catalysed the similar clunking of cogs in my role as a nutritionist and exercise professional.

I’d encourage you to read that whole first post. Hopefully, you won’t expect of yourself that you have to agree with every single thing in order to reap value from it. At a minimum it should make you think.

I always thought paleo was rather bulletproof in terms of corruption and by virtue of its evolutionary foundation, had built-in self correction.

I think Jamie has persuaded me that I was wrong about that.