Why You Should Focus On Gaining Understanding, Not Knowledge; Honesty, Not Truth
Potato Soup Recipe; Cycling High Protein and High Carb

This began as a comment reply to PZO, but got long and involved enough that I had a what the hell? moment, and plopped it up here as a full post, for fun and profit.

Geez, Evan. What do you think happened in medieval Europe? In ancient China? In modern Somalia? In our own western frontier before “the law” would come in? Plenty of well armed people, plenty of violent crime.

I know that the comparisons aren’t exact overlays, there were no firearms in feudal Europe or China, but the historic principle remains the same: Those bent towards power and control will use violence, will take away power and control from everyone they possibly can.

I will also offer up the recent spate of accidental discharges by approved and trained conceal carry idiots that there is at least one other, never discussed, downside to your desire.

As with so many issues, people get a meme in their heads and it never changes (e.g., “If you don’t love America, why don’t you move to Somalia?”). But hell, even a BBC documentary series had to admit that Solamlia is doing pretty well without a central government—and I say arguably better than with one.

Since 26 January 1991, most of Somalia has had neither, yet the economy has not only been resilient, some sectors have shown remarkable growth.

Or how about this comparison, same BBC source? 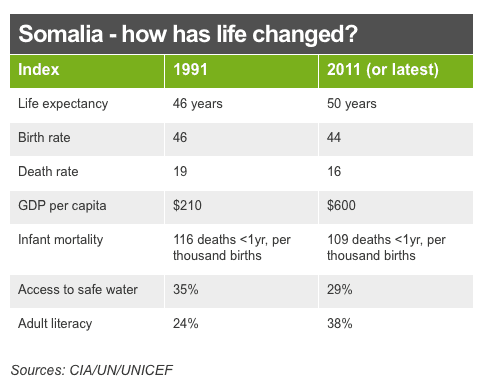 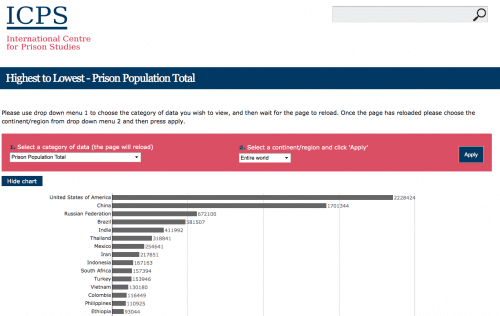 It reminds me of something I recall reading in Solzhenitsyn once, paraphrasing:

“Where there are laws you will find crime.”

…And it’s not so far fetched as concluding that firemen are the cause of fires—since they’re always found at the scene (…or that cholesterol causes heart disease because you always find it in atherosclerotic lesions).

“I will also offer up the recent spate of accidental discharges by approved and trained conceal carry idiots that there is at least one other, never discussed, downside to your desire.”

I’m sure it’s far more prevalent than the recent spate of accidental automobile crashes by approved (licensed) and trained driving idiots. Actually, more people still die in automobiles, but just barely. For obvious reasons (safety engineering) automobile deaths have been declining for decades. Gun deaths have been flat as a total number, meaning that population adjusted, they’re decreasing too…doubly good considering gun ownership rates have increased substantially, owing to liberal gun laws since 1995ish. I looked for a graph with all firearm deaths adjusted for both population AND gun ownership (both having increased substantially), but didn’t find. If someone else can, please pop it in comments.

There are more firearms in the hands of ordinary citizens than ever (and far more than in ancient times), combined with less violent crime, ever.

PZO’s assertion would require the opposite in order to form a reasonable hypothesis. Moreover, as John Lott’s studies have demonstrated, states that have concealed carry, “shall issue” laws (burden of proof shifts to the State), there is no more crime. He and others have claimed that it’s less crime, but the important thing is that it can’t be claimed there’s more (more or less guns, more or less crime). Again, it would be necessary to show a statistically significant increase in violent crime for such an assertion to rise to the level of hypothesis worth giving a shit about, rather than one deserving of dismissal out of hand.

Here’s the current state of concealed carry in the US. 42 of 50 states are now either unrestricted carry (Alaska, Arizona, Arkansas, Vermont and Wyoming) or shall issue, where a permit for concealed carry can neither be delayed or denied unless the State can show cause (criminal convictions, domestic violence, etc.). 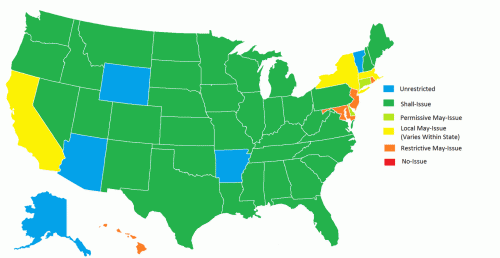 Before the mid-90s, most States had laws making it very difficult to get a concealed carry permit. You had to demonstrate a “legitimate” need according to the State’s definition of legitimate. Between 1973 and 1995, per capita violent crime in the US bounced between about 40 and 51 per 1,000. Since 1995, the rate has consistently decreased to now LESS THAN 4 per 1,000 (2013, FBI data: 387 violent crimes per 100,000)! Violent crime less than a 10th of 1995, in the face of the most liberal gun laws nationwide since the early 1900s, and more guns in the hands of more people than ever.

So what of PZO’s assertion now? Legitimate hypothesis? And now, consider that graph above, and the continuing decrease in violent crime since 2009 to a level under 5 per 1,000, and compare that to estimates of total private ownership of guns in the US. It was about 200 million guns in 1999 compared with a violent crime rate of about 30/1,000, to about 300 million today (estimates range from 300-330 million—I took the BATF figure) compared to a violent crime rate of under 5/1,000.

And yet, enormous swaths of the population remain as gullible of the facts and their interpretation, as do these Gallupers in 2011 (probably even worse now, in the face of violent crime dropping by another 50% since).

Now, let me predict exactly what’s going to happen, if it hasn’t already. Stand by for headlines showing that VIOLENT CRIME INCREASED! And, should we get a year were it falls to 1-2 per 1K, but then next year is 2-4 per 1K: VIOLENT CRIME DOUBLES!

There will always be some violent crime somewhere, but we’re enjoying the lowest rates ever in history, in the face of average citizens having more financial means and freedom to own and now, carry their weapons, than ever.

Now, let’s have some more lafs at the expense of ignorance.

Disarming the Myths Promoted By the Gun Control Lobby (Forbes)

A widely-known study conducted by Gary Kleck and Marc Gertz in the 1990s found that there were somewhere between 830,000 and 2.45 million U.S. defensive gun uses annually. A National Crime Victimization Study (NCVS) which asked victims if they had used a gun in self-defense found that about 108,000 each year had done so. A big problem with the NCVS line of survey reasoning, however, is that it only includes those uses where a citizen kills a criminal, not when one is only wounded, is held by the intended victim until police arrive, or when brandishing a gun caused a criminal to flee.

For these reasons, the Cato researchers investigated published news reports which much more often reveal how Americans use guns in self-defense. The data set is derived from a collection of nearly 5,000 randomly selected incidents published between October 2003 and November 2011. Still, the authors also recognize limitations with this approach, since many defensive incidents are never reported by victims, or when they are, never get published. In fact, the overwhelming majority of the successful self-defense outcomes are those where the defendants’ guns are presented but never fired.

Most of the actual self-defense shootings in the Cato study didn’t involve concealed carry licenses, but more typically had to do with responses to residential invasions. Of these, 488 involved home burglaries. In addition, there were 1,227 incidents where intruders were induced to flee the scene by armed inhabitants, circumstances that might otherwise have resulted in injurious assaults including rapes and murders.

Yes, I know: “news” media outlets are not going out of their way to report or highlight these events. A blurb on local news is about all I ever see.

From the same article, a really good laf, comparing citizens with police.

Then there is the argument that more private gun ownership will lead to more accidents because the average citizen isn’t sufficiently trained to use a weapon defensively. While gun accidents do occur, the Cato study indicates that they are the most overstated risks. There were 535 accidental firearms deaths in 2006 within a population of almost 300 million people. Although every lost life is tragic, the proportion is not particularly startling.

On the other hand, Newsweek has reported that law-abiding American citizens using guns in self-defense during 2003 shot and killed two and one-half times as many criminals as police did, and with fewer than one-fifth as many incidents as police where an innocent person mistakenly identified as a criminal (2% versus 11%).

When seconds count the cops are only minutes away.

This one is not a lafing matter at all. Those poor Great Britains.

The same Forbes article addresses that, too.

Finally, on the subject of public safety, just how well have gun bans worked in other countries? Take the number of home break-ins while residents are present as an indication [“hot break-ins”]. In Canada and Britain, both with tough gun-control laws, nearly half of all burglaries occur when residents are present. But in the U.S. where many households are armed, only about 13% happen when someone is home.

Stop being Fucktards about guns. Go out to an indoor or outdoor range and get some education and training such that you can get over your childish, irrational fear. Otherwise, have the true courage of your convictions.

Update: It occurred to me after posting this that one valid objection to my post might be: could the lower violent crime rate be positively associated with our highest-in-the world prison population (absolute and per capita)? Always good to argue against yourself, sometimes, if clarity and understanding is the aim. Well, I didn’t search exhaustively, but this HuffPo article breaks things down. Of the US prison population, about 50% are over drug offenses (16% in 1970), and 10% immigration. While there’s undoubtedly some crossover with violence, I doubt it could be significant, since no DA is going to prosecute a dope charge when he has murder, aggravated assault or robbery at gunpoint to prosecute.

So, near as I can tell, about 60% of the US prison population is in there for non-violent “offenses.” Just another day in “The Land of the Free.”

Update 2: It occurs to me that at a number of guns in the US estimated at 300-330 million, that’s a gun for every man, woman, child and infant. Tell me when that sort of statistic has ever been true in the history of mankind. And we have the lowest violent crime we’ve ever known of. Kinda tears it: gun control people of every conceivable stripe are every conceivable color of Fucktarded. I wasn’t going to do this, but, my arsenal: 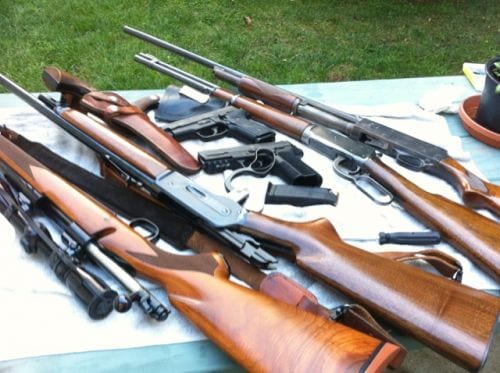 One handed handgun practice (yes, I know it’s a hostage target…two heads are better than one, economically).