So Much Love to Life; Life Love

Just a stub for a post, what I’ve been up to and I do this because above everything else, this is the season to be having lots of fun with those you love the most.

I was up at the cabin last Tuesday, tout seul. Got arranged for cleaners (actually, the old cleaners, but I groveled and we got some stuff sorted out—very happy). Up to my bro’s in Placerville Wednesday afternoon for a couple of days and Beatrice arrived noon Friday with the furry rat killer brats. Then, we headed out with my parents for three nights at Stateline, NV (South Lake Tahoe). 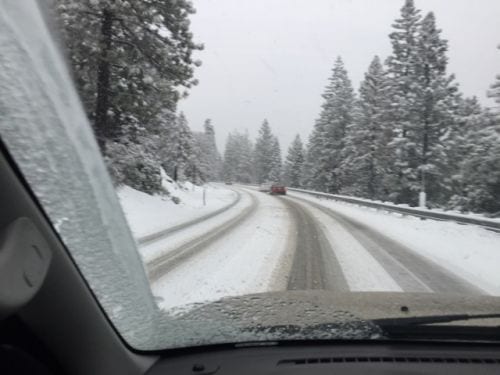 Dinner was on hand once we landed, at Lakeside, where they have an all the time steak and lobster special for $20. It’s a 6oz sirloin, 4oz lobster. Both very nice. Plus, they have these on the menu, flown in daily. 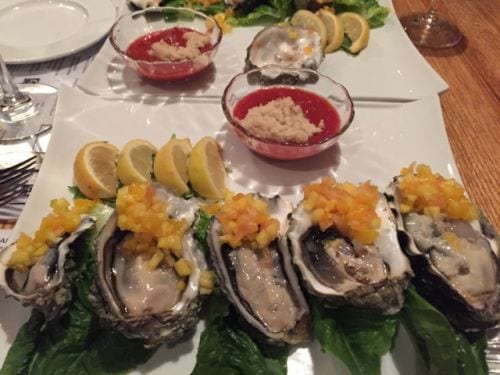 I kicked the mango relish to the side. And, I prefer a mignonette, but the lemon and some cocktail sauce works OK. After, I had prime rib which was just OK. Seems mediumish was the rarest cut they had, so it was brownish pink, not pink pink. Everyone else had the S&L special.

Saturday was a weird ass day for me. We had breakfast at Hard Rock Cafe in Harvey’s around 10am and after that, I never felt like Richard the rest of the day. There was like this mild, persistent stomach ache. It never manifest to anything more. We ended up watching the SF game in the Straw Hat Pizza Sports Bar (a small gluten free pizza, Buffalo wings). At a point, I’d had enough. Walked back and went to bed at 8pm. Soon after, I got a reply text from the Gnollish J. Stanton, coincidentally feeling off himself.

Ass out of bed next morning at 7:30. Felt like shit. We were in some cottages just 100 yards form Harvey’s so hobbled over, hit the Starbucks for a small OJ and a Tall double shot whole milk latte. Thanks a latte, Starbucks; because, I began feeling like Richard again soon after. Headed up to the sport’s book, hit the WiFi, and wrote and published a post about fake doktors. Went out and walked a shit ton. Got a text from the rest and met them to split an omelet with Bea for breakfast. Perfect.

Dad and I went to Harrah’s to watch some Sunday football, where he brought up Earl Grant. He and mom used to go see him perform in the casino nightclubs in Reno in the 60s. Played both piano and organ, and sang. Didn’t know who he was talking about until he brought up Ebb Tide. Yes! You had an album and I wore that song out before I was 10. Anyway, I sit here writing as I listen to The Very Best of Earl Grant I snagged off iTunes (includes Ebb Tide). 21 songs for $12. A voice as gentle as as Jonny Mathis, more power when it counts and he plays piano and organ at the same time. I’m a super sucker for organ. Love Booker T, for instance. Any recommendations?

After arrangements via text, J shows up, meets my dad, and we head off down to the Heavenly Village to chat for a coupla. It would be disingenuous of me to bring up J, whom I always meet up with when in Tahoe, without mentioning that he got a bit “uncomfortable” (his word) with two specific things I did (and which have noting to do with what others have told me he’s probably pissed about). I told my dad: “well, J and I need to go talk paleo and I think he may have some scolding to do.””

In the end, J is J and Richard is Richard and we always get along swimmingly. 80% of our 2-hr convo was tossing around all manner of stuff about root causes of the obesity epidemic, nothing off limits.

I think J would not mind me telling you that you may soon see more of him and his absence over a few months is completely the result of really, really nice stuff happening for him personally. He’s one very happy man, such a pleasure to share company with.

…He did need to point out one angle to me though, of the fountain in Heavenly Village. 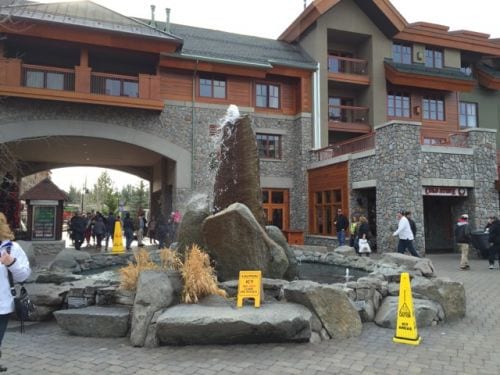 In a few weeks the fountain will freeze over for the winter and the water will take on a certain opaque quality.

…Bea and I are spending a night here at the cabin before returning to San Jose tomorrow, where here parents fly in, the afternoon.