[Do check out the two posts I put up this weekend, if you didn’t see them. I especially like the post on gun fear and ignorance. A post every gun control lefty ought be forced to recite from rote memory. And as a sort of prelude to this post, I’ve been clandestinely cycling high protein/high fat, with high carb/lowfat. Check out this lipid panel in that context.]

Been a long time since I had any blood tests. I was having a 6:40am MRI Saturday for my probable lumbar herniation…BUTT BUTT BUTT BUTT…UPPR UPPR UPPR UPPR…BRK BRK BRK BRK… (Ha! well that’s how I entertained myself for the last half of 25 minutes in “the tube,” after getting bored spending the first half thinking of all the film and TV “buried alive” scenarios I could remember.) So, since I was there and fasted, I had the doc order up standard blood work and I hit the lab right after the torture chamber.

Yes, my doc Bradley is an avocado farmer on the side.

Here’s how it graphs with past results. 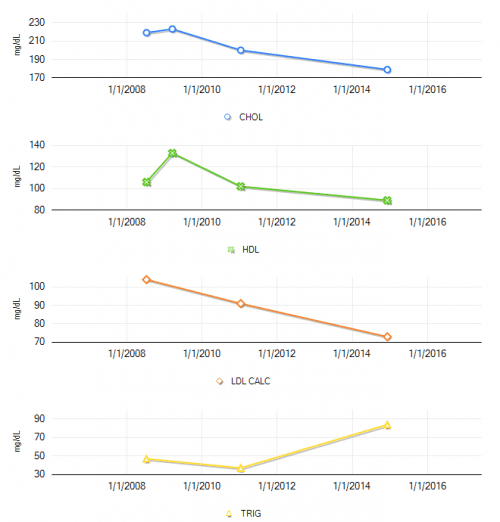 Basically, everything went down except Trigs. I suppose it’s generally taken as “good” that total went from 220-230 down to 179. It’s probably taken as generally “just fine” that HDL “good cholesterol” went from highs of 110-140, down to a still pretty high 90. Some people struggle like hell to get to that > 60 sweet spot. LDL from 110 down to 73 probably assures that my doc is boxing up some confetti for me as we speak, and won’t be recommending a statin drug. (I did have an LDL direct measure in 2011 and it came in at 82.)

I think my favorite number is the Trigs, though. In the 80s, it signifies—to me at least—that my starch, carb, resistant starch, modest sugar and fruit juice intake is just about right. Not crazy (after all, the reference range for Trigs is < 500 mg/dL). I’d probably be fine with anything up to 150. Doesn’t that strike you as a more healthful and balanced approach than where I was, in the 40s, suffering lethargy, cold hands, cold feet?

So, let that put to rest the idea that I’ve gone high carb vegan on you. In terms of other results, no surprises, with liver enzymes and all other mundane stuff in normal ranges. Vit D is 56.

The only adverse result is TSH (thyroid stimulating hormone), and doc didn’t want to do the full Thy panel unless TSH was still elevated (I stopped my Armor T meds long ago), so I have drilling down to do. Why? Because back in 2008/2009, TSH was 16 (normal is about zilch to 5). Got on Armor and three tests—2009-2011—had it in normal range (free T3/4 normal range as well). Now, it’s 9, almost halved from the high of 16, and with no meds in a few years. Thing is, I have no data point for where it was between 2011 and 2013, before I began my gut bug therapy (was it back near 16?). So, open Q on this, still, but I’m intrigued enough to be interested, so I’ll pursue. Incidentally, I have zero of any hypoT symptoms, anymore.

…One other topic I thought I’d address is the matter of 16S rRNA sequencing of your shit. I’m not sure why, and to each his own, but the idea hasn’t really been compelling to me (I have not had it done by either American Gut or uBiome). I kinda go with how I feel and unless I end up with chronic runny or tough shits—rather than the odd, random event of either as everyone does accutely—I’m not sure what it’s going to tell me.

I did things a bit differently. I did my “#2” in a new, food grade, plastic bag. Kneaded it thoroughly. Then I touched the exact same spot lightly with the swabs provided by the two companies. […]

Strange. Some really big discrepancies and also some eerie similarities. I’d say overall they did a pretty good job, but when they were off…they were WAY off.

Tim does maintain a good perspective, though, saying, “And anyway, this is all just for fun.”

Exactly, so that perspective perhaps ought to be kept in mind when you decide how many bucks you want to spend on this form of entertainment. …Also, keep that in mind as increasing numbers of opportunists come on line to tell you how jacked your gut is, and begin diagnosing all sorts of health issues over the Internet, based on this evidently fuzzy data.

In the same vein, having the shits could be a sign of health, so long as acute. So, when you begin getting the other 70% of your immune system up to snuff by targeted feeding and spend a night on the can, perhaps that information is positive, not negative.

Food for thought and for a gut feeling.