The Story of the WWI Christmas Truce

Last time I brought this up was a Christmas time post in 2006. Time to haul it out again. 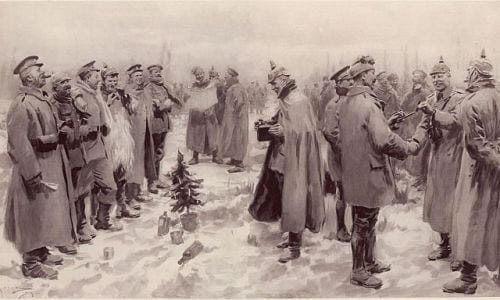 The Christmas truce (German: Weihnachtsfrieden; French: Trêve de Noël) was a series of widespread but unofficial ceasefires along the Western Front around Christmas 1914. In the week leading up to the holiday, German and British soldiers crossed trenches to exchange seasonal greetings and talk. In areas, men from both sides ventured into no man’s land on Christmas Eve and Christmas Day to mingle and exchange food and souvenirs. There were joint burial ceremonies and prisoner swaps, while several meetings ended in carol-singing. Men played games of football with one another, giving one of the most enduring images of the truce.

“Lieutenant Geoffrey Heinekey, new to the 2nd Queen’s Westminster Rifles, wrote to his mother, ‘A most extraordinary thing happened. . . Some Germans came out and held up their hands and began to take in some of their wounded and so we ourselves immediately got out of our trenches and began bringing in our wounded also. The Germans then beckoned to us and a lot of us went over and talked to them and they helped us to bury our dead. This lasted the whole morning and I talked to several of them and I must say they seemed extraordinarily fine men . . . . It seemed too ironical for words. There, the night before we had been having a terrific battle and the morning after, there we were smoking their cigarettes and they smoking ours.”

“War is the health of the state,” Randolph Bourne, 1918. From Wendy McElroy:

The thrust of Bourne’s essays is to attack the sanctity of war by showing how it leads to the moral collapse of society by kicking out the props (the principles) of peaceful interaction upon which society rests.

In essence, Bourne addressed the moral consequences of war upon a post-war society which had abandoned individualism in favor of “the herd-machinery.” He eloquently argued that post-war America would be morally, intellectually, and psychologically impoverished. By this observation, Bourne did not mean that peace time America would struggle under the increased bureaucracy that never seems to roll-back to pre-war levels. Many historians have made this point. Bourne addressed the less tangible, though arguably more significant, costs of war. For example, post-1918 America would be burdened by intellectuals who had “forgotten that the real enemy is War rather than imperial Germany.” In converting World War I into a holy war, the intellectual and psychological groundwork was being laid for future instances of what he termed “the sport of the upper class” — global conflict.

Update: Turns out there’s a 2005 French film that tells the story. It’s not on Netflix, but it’s free streaming on Amazon Prime.