The Hunt is On: Tiger Nuts, Per Grace Liu

It was interesting skimming Grace Liu’s latest post (part 6 of her Gish Gallop on how RS2 is gonna killz U—after making you fat, destroying your “ancestral core,” and giving you hamster gutz, among other very bad stuff), in spite of thousands of anecdotes to the contrary, including a couple of recent revelations of individuals stopping their intake on her advice, and getting worse again (see here and here). Tim Steele has a comprehensive view of the whole deal that includes laughing.

In her latest, tiger nuts (high in RS2) are now implicated. Now, rather than a beneficial mainstay that helped Nutcracker Man flourish for 1 – 1.2 million years and possibly profoundly altered hominoid evolution, it’s only suitable for non-cooking hominids and you should never eat anything raw—not just tiger nuts: but any nuts, fruits, vegetables (right, by implication?). Because, once you’ve moved on to cooking meat, everything that contributed to the evolutionary steps is now poison, kills your ancestral core, gives you hamster gut…and hangnails. Basically, anything that now goes wrong with you, if you consumed RS2, that’s the cause.

It reminded me of what I still do consider to be the most interesting idea she came up with for the book the three of us were working. Tim had drafted a tiger nut overview that Grace insisted on expanding. Below is 80% Grace. I edited to remove words in caps, too many “hawt” references, and ‘explanation’ points!!! Thought you might take a look and ask yourself why she’s now willing to have people be worse off in embracing a 180 degree different view. What’s the real agenda?

Nutcracker Man was lifted from his plight as that of an intelligent ape, to a lineage that would become fully human. His growing brain was fueled not by hard-to-obtain foods that required nearly all his time to find, but by tiger nuts—the roots of what we’d think of as weeds—that were rich in iron, fat, protein, and carbohydrate. [1] Each thumb-sized tuber of the tiger nut was the equivalent of eating a small frog. It wasn’t meat but it distinguished him from his neighbors and predecessors. [2] Coming from frugivore (fruit eater) and foliovore (leaf eater) backgrounds, this new food was the equivalent of an energy bar. [3] [4] No longer are plant tubers of this nature thought of as “fallback food,” used only for basic survival, but as a source of primary sustenance. Tiger nuts and other tubers shaped man’s evolution just as Darwin’s finches beaks and morphology were shaped by radical changes in source allocation of seeds on the Galapagos Islands. [5]

Tiger nuts were the original ribeye steak compared to leaves and fruit. But unlike a delicious steak, tiger nuts also furnished ample plant fiber food for our vital gut bugs. It’s rich in insoluble fiber, resistant starch, and other fuel. Tiger nuts also supplied a generous source of carbohydrates, fats, short-chain omega-3 fats (ALA), protein, vitamin C, and a full spectrum of the minerals (iron, zinc) and micronutrients needed to enable the rapid growth of a large brain. Is it any coincidence that stone tools began to be crafted by these early men shortly after this ground-breaking meat-like main dish appeared, making up Nutcracker man’s entire food pyramid? Nutcracker Man thrived, grew a bigger brain, and made tool technology to collect and process more food. He lived the longest out of all the Australopithecine. He weighed the most and grew the tallest. After him, all of our ancestors possessed grander noggins and more slender jaws. Exceeding one million years of domination, Nutcracker Man was ultimately replaced by the more advanced hominin, Homo erectus. The meat- and seafood-eating versions became human evolution’s breakthrough prototypes —Homo ergaster, Homo erectus, Homo neanderthalensis and us. [6] [7] 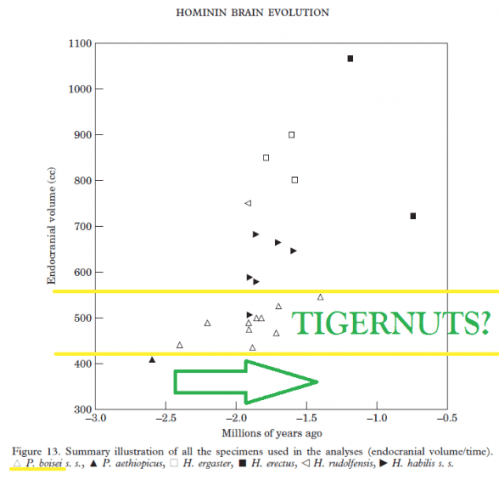 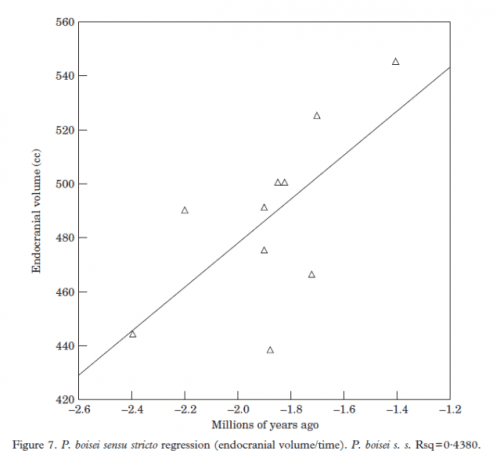 Nutcracker man outlasted, outsurvived, and outsmarted many of his bigger-brained, notable contemporaries: A. robustus, H. rudolphensis, H. ergaster, and H. habilis. This was no easy feat as weather patterns shifted and food sources changed radically. Forests which were flush with waterways and rich resources only dot the landscape during the Pleiocene epoch. Nutcracker man’s peers became successively extinct at 200 to 300 thousand year intervals, yet during the one million years he claimed a wide ecological niche (~2.4 mya to 1.4 mya), Nutcracker man’s brain actually expanded and grew by a significant ~25% from a measly ~440 cc in volume. During this period, H. ergaster and H. habilis grew slightly larger brains as well; however, they failed to last as long as Nutcracker man and his progeny. It appears that the diet which archaeology determined was dominated by sedge tubers and tigernuts likely drove this distinctly larger brain for Nutcracker man and distinguished longevity. No other foods other than roasted starches and hunting and fishing supplied similar brain nourishment: starches, sugar, and omega-3.

Tiger nuts still grow just like they did over 2 million years ago and are still enjoyed by Homo sapiens the world over. This isn’t a food that just “sticks to your ribs.” It is quite possibly is your ribs (and your liver, kidneys, and brain). Along with the development of our brain, tiger nuts surely had a huge part in the development of our “second brain,” the trillions of neurons located in and around our digestive tract that provide two-way communication between our guts and brains. As our brain increased in size from 400cc to 1500cc, it is not much of a stretch to assume that our brain-gut connection tripled in importance during this same time. [8]

The modern human brain and gut are deep sinks for energy use, just like your air conditioner and outrageously high energy bills during blistering summers. Each organ requires massive amounts (15-25%) of resting energy to feed these two organs. Cnsidering the relative weight of each organ compared to the rest of the body, this is quite enormous. The brain, gut and microbiota contribute only a tiny fraction of the total body weight (averages for 65 kg person): [9] [10]

Energetically speaking, these are some of our most expensive organs, and these changes evolved during the long reign of Nutcracker man and immediately afterwards. Compared to other mammals, modern human brains burn up large sections of bandwidth when it comes to the distribution of background energy production from food digestion and burning body fat. For adult humans, as much 20-25% are allocated for brain metabolism, and this is ~3-fold more than primates (7-9%) and ~9-fold more than non-primate mammals (3%). [11]

These differences brought about the genesis of a new animal that the world had never seen.

Instead, they evolved organs which were new and unique in the animal kingdom: 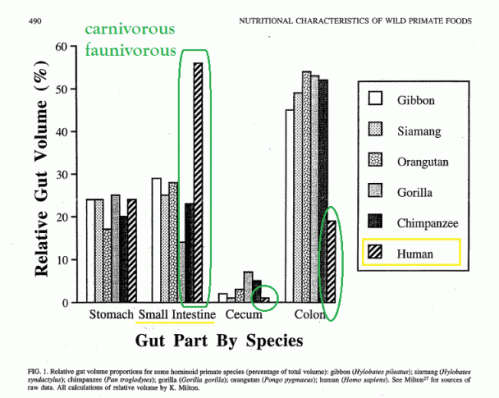 Emerging approximately 1.8 to 1.9 mya, Homo erectus shared the paleo landscape with Nutcracker man during his last 400,000 years. During the overlap, many commonalities including omega-3 and starches (tiger and sedge nuts) likely forged parallel changes in bigger brains and bellies for both groups. [19] [20] Sustained and stable sources of more and more carbohydrates and special fiber (resistant starches) for both intellect and intestines might have provided the first extraordinary catalysts for evolutionary jumps toward humanity. Whether Nutcracker man knew that or not, sedge and tigernuts cemented our bright futures as he dug up those muddy jewels. Ultimately, the hominin that won was the one who learned to hunt and char their tigernuts-n-tubers.

The demise of Nutcracker Man is a Pleistocene mystery. [21] It’s possible he doomed his bright future by over relying on too narrow a niche of termites and raw tubers—failing to broaden to other roots and shoots, to diversify to scavenging and hunting meat or seafood like his replacements did [22] [23] or to learn culinary skills like firing up the BBQ.

Though rich in vitamin C, sedge nuts lose this vitamin with time and storage. We and our anthropoid primate relatives do not make vitamin C, and neither do our gut bugs. Without regular intake, reserves dwindle within 20 days. Blood vessels leak, immunity weakens and later, death ensues. Vitamin C requirements for Australopithecine were probably not that different from that of modern humans. [24] A large supply of fresh tiger nuts (1-1.5 kg) would’ve easily supplied this. However, as immense bogs, lakes, and peatlands dried up over time, so did their perpetual supply of sedge and tiger nuts. Additionally, extensive storage in the ground for months over months would have subjected stored vitamin C to degradation. Nutcracker Man saw his final act approximately 1.4 mya, just as arid savannahs and grasslands spread across the landscape. It may have been “curtains” for Nutcracker Man, but the gut bugs were to be the main attraction anyway, along with the more modern, evolved hosts they would inhabit.

Our Homo forerunners, however, may have successfully averted scurvy and death by finding mixed nourishment that not only provided iron and fat, but vitamin C as well. [25] With the scavenging of meat, marrow, brain and organs from herbivores, Homo may have taken the opportunity to fill the nutritional chasm that a big brain and sedge-heavy diet created—critical deficiencies of omega-3, iron, iodine, zinc, vitamin C, A and B12. [26] H. erectus may have been the first to use fire to cook underground tubers, and thus so inadvertently added new calories and brain-needed complex carbohydrates. The evidence fails to reveal that Nutcracker man fired up the grill for his tigernuts or other food.

It’s enlightening to consider that just when a food came along that fed our intestinal microbes at the same time it fed the human host in a high density fashion—unlike leaves and the like—the greatest leap in human evolution took place. Soon, early humans were fishing, hunting, and cooking. No longer was evolution measured in millions of years, but thousands. For the last part of our evolution into modern man, several species of hominin appeared at the same time, all eating the same plants—but only Homo had the wherewithal and savvy to begin cooking these foods, extracting even more nutrition for himself and his intestinal microbes.

OK, did you get all of that? I think it was excellent thinking and analysis on the part of Grace Liu.

Unfortunately, it’s now more important for her to act stupid, wave hands, lie her ass off, and harm people.