Taking A Look At Medicinal Mushrooms: Chaga and Reishi

Trying to take an honest, objective look at anything that’s within range of the SUPERFOOD!!! radar is a big PITA, let me tell you. There’s 1,000 wide-eyed, hyped “articles” for every one that’s measured and cautious.

…I get emails almost every day from people wanting to send me products to try, in the hope I’ll like them, sign up for their affiliate deal, promote it here, etc. I don’t even respond to 95% of them. You wouldn’t believe some of the stuff people peddle, and the fact they’re even asking me says that their first line—“I’ve been following your blog for a long time”—is a lie. Delete.

Being criticized for having the audacity to actually have this blog reimburse me for some of the time I spend at it (similar to having the audacity to demand your employer reimburse you for your time and efforts) can be irritating on that score alone, but doubly so because I think I do it in a decent way that’s not nearly so annoying as having to sit through 3 minutes of commercials on the TV every 10 minutes. 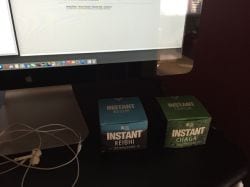 Proof that I actually use it

…About a month ago I got an email from Lari Laurikkala, one of the Finns that run Four Sigma Foods, asking if I’d be willing to try a couple of their medicinal mushroom products: Chaga (Inonotus obliquus) and Reishi (Lingzhi mushroom), to be exact. Before I hit the delete button (SUPERFOOD!!! radar) I recall Tim Steele mentioning something about a medicinal ‘shroom he’d used for a long time, so I asked him and sure enough, Chaga is the one.

Alright, I’m in. Having used them for a week or so now I’ve decided to promote them and add them to My Amazon Store.

Four Sigma Foods Instant Chaga, 20 Count. For me, the taste is earthy and slight vanilla. I’ve had it in hot water, hot coffee, a smoothie and cold Tejava.

In terms of medicinal benefits, I really can’t claim anything other than it seems soothing on the tummy, which is fine. There’s some sign that it helps my morning back and leg pain (virtue of my L4-5 herniation) recede sooner for the day. Jury still out but, ibuprofen definitely helps for that and Chaga is supposed to have anti-inflammatory properties. Of course, there are a million medicinal claims. What’s more relevant to me is that it has stood the centuries test of time in being a folk remedy in certain parts of the world. Anyway, here’s one of the more objective pieces I found on it, from the Memorial Sloan Kettering Cancer Center.

Chaga mushroom, found on Birch and other trees in cold climates, has been used in folk medicine in Russia and other North European countries for generations. Chaga draws nutrients from the tree on which it grows and extracts are typically derived from the inner layers of the bark. The active constituents are thought to be a combination of triterpenes, such as betulinic acid, sterols, and polysaccharides. Chaga has demonstrated anticancer, antiviral, anti platelet, (2) anti-inflammatory, analgesic, (3) immune stimulating properties in vitro, and hypoglycemic effects in mice. (4) Chaga extract has inhibitory and proapoptotic effects against colon cancer (5) and hepatoma (1) cells. It also reduced toxicity associated with radiation (6) and inhibited tumor cell growth in animal models. (7) In some studies, Chaga demonstrates selective apoptosis in tumor cells with no effects on healthy cells. (1)

No clinical trials have been conducted to assess chaga’s safety and efficacy for disease prevention or for the treatment of cancer, cardiovascular disease, or diabetes.

Constituents of chaga mushroom extract may interact with anticoagulant and antidiabetic drugs. […]

Chaga demonstrated hypoglycemic effects in mice with diabetes mellitus. (4) It’s anti-inflammatory and pain relieving properties are thought to be via inhibition of nitric oxide synthase (iNOS) and cyclooxygenase-2 (COX-2). (3) An extract of chaga reduced the oxidative stress in lymphocytes from patients with from inflammatory bowel disease. (8) Chaga also showed anti-mutagenic properties. (9) A hot water extract of chaga exhibited inhibitory and proapoptotic actions against colon cancer cell proliferation via up-regulation of Bax and caspase-3 and down-regulation of Bcl-2. (5) Aqueous extracts of chaga also inhibited growth of human hepatoma cells via arrest of the cell cycle in Go/G1 phase and inducing selective apoptosis. (1) The selectivity may also be a result of activation from a change in the pH of the tumor microenvironment. (11) Betulinic acid, a constituent of chaga, is cytotoxic and triggers apoptosis through a direct effect on the mitochondria of cancer cells. Other apoptosis-inducing factors result in cleavage of caspases and nuclear fragmentation. (7) Like many medicinal mushrooms, chaga is rich in beta glucans which have immunomodulating activities. Beta glucans bind to Complement Receptor 3 (CR3) that allows the immune cells to recognize cancer cells as “non-self.” (10)

Ok, now on to the next one.

Four Sigma Foods Instant Reishi, 20 Count. For me, the taste is pretty big anise (licorice). I’ve had it in hot water, hot coffee, a smoothie and cold Tejava.

In terms of the medicinal claims, let’s see what the Life Extension Foundation has to say:

Over the past several decades, scientific research has intensified and focused on analyzing the hundreds of unique bio-active compounds found in the medicinal Reishi Mushroom. Just this year alone, three new compounds were discovered. With each new finding, intriguing medical applications for Reishi have emerged.

There is now a wealth of impressive data that demonstrates Reishi’s life extending properties [1, 2]  but also its significant ability to stimulate brain neurons, [3] search and destroy cancer cells [4] and prevent the development of new fat cells in obese individuals. [5]  As an example of growing science supporting Reishi, researchers using laboratory mice have detailed life span extension of 9% to more than 20% —the equivalent of 7 to nearly 16 years in human terms. [2, 6, 7]

Given Reishi’s complex composition of bioactive compounds, there is still more to discover. In this report, we will bring you up to date on how Reishi successfully targets a broad spectrum of deleterious factors of aging.

[See page 2 of the article for the references and fire up your Google Scholar.]

I’ve also combined the two of them in hot and cold ways, the latest discovery of that motivating me to actually promote it. Yesterday, I mixed the Chaga in a glass of Tejava, and though it flavors it, lots sinks to the bottom and ends up as kind of a gummy paste. So, I scraped with a spoon and swallowed it. There was still gummy sediment, so I just put a little water in the glass for soaking. Sure enough, in about 2 hours it was completely dissolved. So, this morning I took a fresh 1 Lt. bottle of Tejava and a funnel, and added 2 packets each of the Chaga and Reishi. Two hours later is was completely dissolved and wow do I have a smashing, dark, deep delicious tea.

In other words, the medicinal claims are what they are but ultimately, you should want to enjoy drinking it. That very much satisfied, I can recommend it to you with pride and in terms of medicinal benefit, that’s just a bonus.

In terms of cost, soon after getting the boxes I checked on pricing and found they were about $25-30 per box, depending on where you source them. My first impression was that’s expensive, but then I thought well, with 20 packets, it’s $1.25 – $1.50 per serving—nowhere near Starbuck’s profit margins (or bottled water companies, for that matter).

So, it shall remain an enjoyable deal for me. Give it a try. If you have, let us know what you think and by all means, if you have specific knowings of the medicinal aspects, those are welcome too.